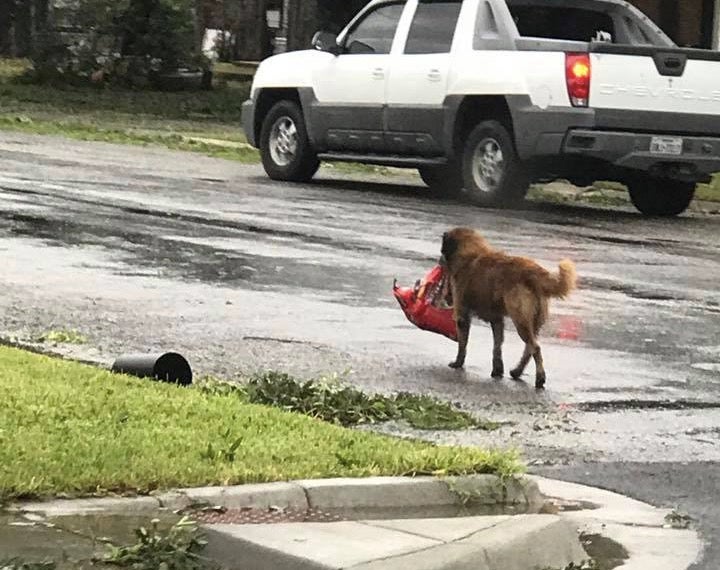 During a time when humans locked themselves indoors due to bad weather, a dog was spotted walking the streets of Papalote, Texas with a bag of dog food dangling from its jaws.

A photo of the dog, identified as “Otis,” was posted by Facebook user Tiele Dockens who lived around the area. It turns out that Otis was a well known dog in the community and belonged to resident Salvador Segovia’s five year-old grandson Carter.

According to a report by Chron, the boy was evacuated from the area due to flooding, leaving Otis to be looked after by Segovia.

“Otis can go to Dairy Queen and he can get a hamburger. He’s the only dog allowed to lie down in front of the county court house,” explained Segovia to Chron.

Otis is a German shepherd mix who actually works as a service dog assigned to Carter. The dog has helped comfort the child following numerous hospital visits due to asthma and seizures.

Segovia discovered Otis missing on Friday evening. The next day, he also noticed that a bag of dog food has also disappeared. He soon after started driving around the neighborhood to find the dog, said the report, and was flagged down by a neighbor who saw Otis.

Segovia was able to track down Otis and bring him safely home, while a town cleanup was underway after hurricane Harvey passed.

Some of the commenters had a good laugh from the photo and applauded Otis, saying the dog was more prepared than most humans.

Meanwhile, one commenter saw Otis as a symbol of the Texas spirit of being able to take care of one’s self.

Service dogs have been known to get attached to their charges. Otis may have wandered off in search of Carter after the child was evacuated. Alfred Bayle/JB

LOOK: ‘End of the rainbow’ discovered by Japanese netizen

Annoying pet rooster put up for immediate adoption by owner

WATCH: Panty pillowcase might just tap into your oddest fetish