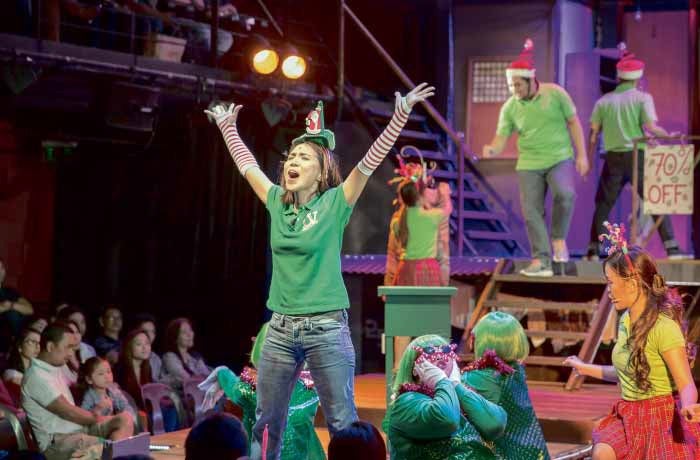 The Peta Theater Center, headquarters of the Philippine Educational Theater Association in Quezon City, is a beehive of activity.

Children lounge at the lobby outside the theater, teachers and parents take selfies, and, in the office upstairs, young people work in cubicles in T-shirts and shorts.

Many children, she explains, are around because a performance of the play “Tagu-taguan Nasaan ang Buwan” has just ended.

There’s also a storytelling workshop going on, and later, there will be rehearsals for the new play, “Game of Trolls,” she says.

The impression one gets is that Peta runs like a full-fledged, well-oiled company whose business happens to be theater.

On April 7, the theater company celebrated its 50th anniversary. Two months later, its president, Cecilia “CB” Garrucho, was informed that Peta was among six recipients of the Ramon Magsaysay Awards—the only organization to win on this year’s roster.

The milestone couldn’t have come at a better time. “It’s like a grand gift, an affirmation of 50 years of work,” Cabangon tells the Inquirer. “Very inspiring.”

Garrucho adds: “We had been taking care of Soxy (Topacio, a former Peta executive director and one of its stalwart actors and playwrights) who was ill. (He died on July 21 of lung cancer). We were feeling down and so sad when we learned about the award. The joy that the award brought us balanced the grief of losing Soxy.”

But Peta’s early years were marked by uncertainty. In 1973, five years into its operations, Peta founder Cecile Guidote-Alvarez was forced to go into exile in the United States with her husband, Heherson “Sonny” Alvarez, a Constitutional Convention delegate in 1971 who reportedly was marked for liquidation by then President Ferdinand Marcos upon the declaration of martial law in 1972.

It was like being orphaned, Garrucho says. “The plans [for Peta] were all in Cecile’s head, so when she left, it was a big challenge.”

But the vision of a Philippine theater engaged in the development of people and society was enough for those who stayed to pursue it.

“There was hardly any audience. No support. Those were really difficult times. The sense of Filipino identity through plays was almost none. Plays were mostly in English. It was important to push the agenda of creating more Filipino plays. The purpose drove us, even with no support,” she added.

In 1987, Cabangon was fresh out of college at Stella Maris when she joined Peta as Metro Manila coordinator for support organizing and linkages.

“It’s always difficult when you don’t have resources,” she says. “We didn’t have a permanent space for an office. We were always moving.”

Cabangon says that Peta workshops also had to be held in different places. “We had Rajah Sulayman as performance venue, but when it’s raining, you look for alternative venues.”

How Peta evolved, stayed relevant and true to its vision, is the result of a dedicated team of professional artists who were trained to also function as efficient arts managers.

Garrucho recalls: “We were a bunch of young people. I thought I was just going to act. As it turned out, we were going to teach people who had nothing to do with theater—fishermen, farmers.

“When we joined Peta, it was drummed in our heads, ‘You’re not just going to act or dance onstage. You’re gonna take your art, learn as much as you can and you will share it with the people. Art is for public service.’ And when you’re young, you really internalize that,” she adds.

Cabangon admits that “when somebody turns 50, the concern is for that person’s creative juices not to dry.”

She adds that Peta artistic director Maribel Legarda sees to it that the company remains exciting and relevant. “Maribel presents a season plan every year which is approved by a management committee. We also see what’s happening outside.”

Peta develops at least two original plays every year to be performed at the Peta Theater Center, aside from those it takes out on tour.

The plays are written by Peta’s resident artists led by Rody Vera, as well as by other playwrights commissioned to write material.

Ninety percent of Peta productions are originals, while 10 percent are adaptations or translations. An example is “Haring Lear,” adapted by Bienvenido Lumbera from the original “King Lear” by William Shakespeare.

Having its own home was another milestone.

The Peta Theater Center, a complex that includes a performance venue, rehearsal spaces and an office, is a partnership with one of its longtime funding partners, Icco Cooperation, which is based in The Netherlands.

“One of Peta’s biggest dreams was to build an institute of people’s theater, like a center and a school,” Cabangon says. “But the dream was so big, we thought we could start with something more feasible.

“When Icco offered support, the first thing we thought was to have a permanent home that will house our performance venue and workshops.”

Cabangon says Icco gave an initial amount and Peta’s board of directors sought additional funding from international and local donors.

“It took us 10 years to build the Theater Center which opened in 2005,” Cabangon says. “The Peta Theater Center is the first phase of our big dream.”

These days, Peta is on a roll. “Rak of Aegis,” which recently ended its run after 206 shows, is the company’s most commercially successful play in the last two decades.

“It opened a lot of doors for Peta,” Cabangon says.

Garrucho adds: “Look at the number of theater groups that are thriving, with an increasing number of audiences.

But they still wish there would be more support, if not from government, at least from private corporations that look at the arts as a way of developing a thinking, empowered citizenry.

Peta was born in the 1960s and continues to live up to the idealism of that decade.