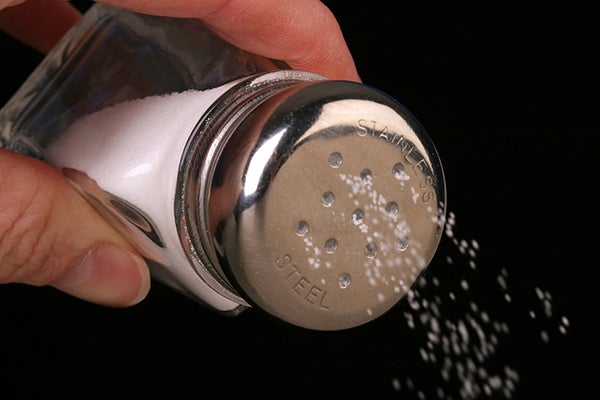 Yet more evidence suggests that too much salt can contribute to the risk of heart disease. Image: donald_gruener/Istock via AFP Relaxnews

Eating too much salt could double the risk of heart failure

A new European study has found that a high intake of salt can double the risk of heart failure, with researchers now suggesting that salt consumption needs to be reduced to below even current guidelines.

Carried out by researchers from the National Institute for Health and Welfare, Helsinki, Finland, the study set out to assess the link between salt intake and its role in the development of heart failure.

“High salt (sodium chloride) intake is one of the major causes of high blood pressure and an independent risk factor for coronary heart disease (CHD) and stroke,” said Prof Pekka Jousilahti, research professor at the National Institute for Health and Welfare, Helsinki, Finland. “In addition to CHD and stroke, heart failure is one of the major cardiovascular diseases in Europe and globally but the role of high salt intake in its development is unknown.”

The research was a follow-up study of 4630 men and women who participated in the North Karelia Salt Study and the National FINRISK Study between 1979 and 2002 in Finland.

Participants aged between 25 and 64 at the start of the study were randomly selected for the follow-up.

The team collected information on participants’ health behavior using a questionnaire and took measurements of weight, height and blood pressure, and urine samples.

As taking accurate salt measurements for each individual can be difficult, the researchers used a test considered the gold standard for individual salt intake estimation.

The participants were then followed for up to 12 years with the researchers recording any incidences of heart failure.

The team found that those who consumed more than 13.7 grams of salt each day had a two times higher risk of heart failure compared to those whose intake was less than 6.8 grams.

“The heart does not like salt,” said Prof Jousilahti. “High salt intake markedly increases the risk of heart failure. This salt-related increase in heart failure risk was independent of blood pressure.”

Although he noted that, “Studies in larger, pooled population cohorts are needed to make more detailed estimations of the increased heart failure risk associated with consuming salt,” Prof Jousilahti also added that there is a need to drastically reduce salt intake: “The optimal daily salt intake is probably even lower than 6.8 grams. The World Health Organization recommends a maximum of 5 grams per day and the physiological need is 2 to 3 grams per day.” JB

5 inexpensive superfoods for a health boost