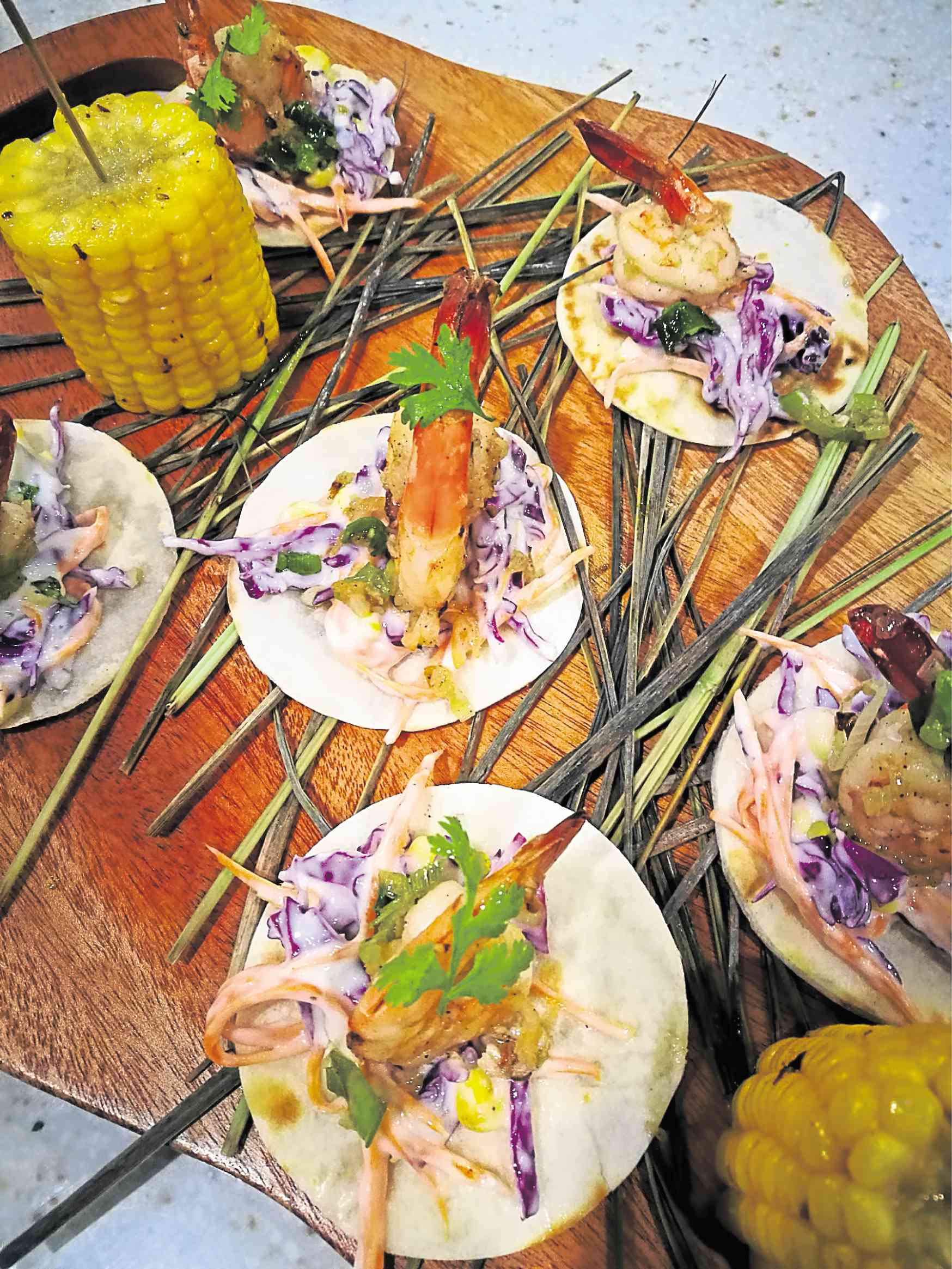 Shrimp tacos at Farm to Table; above right, baked oysters topped with cheese and garlic at Breakthrough —PHOTOS BY RAOUL J. CHEE KEE

For many tourists, Iloilo City is synonymous to good eats: piping hot batchoy, grilled managat (mangrove jack), and oysters on the half shell or gussied up with butter and garlic.

During a recent trip to witness the history-making concert of the Manila Symphony Orchestra in Molo Church, we found time to visit old haunts and try out “new” dishes.

At Netong’s, in the La Paz market, we slurped on batchoy that has been made the same way since the 1940s—using pork innards with egg noodles topped with chicharon and bone marrow. The soup is cooked for hours and flavored with shrimp paste (guinamos). It is best eaten with the sweet puto Manapla that comes in banana leaf wrapped in packs of three.

Nearby, also in the market of La Paz, is Madge Café, another institution. The coffee is black and strong, made with locally grown coffee beans, and can be served in a repurposed milk can. Waste not, want not.

Both Netong’s and Madge Café have opened branches at Seda Atria. But for an authentic feel, head to the market and jostle for space with the locals who have been patronizing both for decades.

Our hosts, Sen. Franklin Drilon and his wife Mila, took us to lunch at Breakthrough where we feasted on managat, catfish in a tasty yellow sauce, scallops, and grilled native chicken. For dessert, Ms Drilon brought out a bag of preserved Chinese prunes that she graciously shared.

Lunch the next day was at the Camiña Balay nga Bato (stone house), a 153-year-old house in the Arevalo district of Iloilo. The place is chockfull of antiques from different eras; it feels like you’re visiting an elderly aunt’s home in the province. There’s a piano in the dining room and a hallway full of santo.

The food is arranged on tables in the hallway adjacent to the azotea comedor, and ranges from bahay-kubo vegetables and garlicky fresh lumpia Ilonggo to Bino-ug nga Baboy (roast pork seasoned with salt).

Reservations are required (tel. 09217396491) at least two days in advance, with a minimum of 10 diners for either lunch or dinner.

Chef Pauline Banusing’s Farm to Table restaurant, across the Iloilo Convention Center, has a wide menu that includes soft-shell crab, pizzas, burgers and kare-kare. What links these disparate dishes is her aim to work closely with local farmers and fishermen who supply her with fresh meat, fish and produce.

The avocados she uses for her salads are grown by former rebels, and the peanut butter that goes into her delicious kare-kare is made with peanuts grown in the province. She also serves tasty shrimp tacos made with the freshest catch.

We managed to sneak in a trip to Roberto’s, a small eatery in downtown Iloilo, after hearing so much about its Queen siopao. Priced at P90, it’s packed with chicken and pork adobo with bacon. There is also a King variant (ham, chicken and pork adobo, Chinese sausage and egg) which is P15 cheaper.

Arriving too early, we were told the Queen hadn’t arrived, so we settled for the Jumbo siopao (P55) with chicken and pork adobo with egg that was delicious, if a bit sodden. The best time to come if you want to try the Queen is between 10 a.m. and 1 p.m.

Netong’s and Madge Café are at the La Paz Public Market. Camiña Balay nga Bato is on Osmeña St., Arevalo. Farm to Table is at Transcom Bldg., Megaworld Blvd., Mandurriao. Roberto’s is on 61 J.M. Basa St.