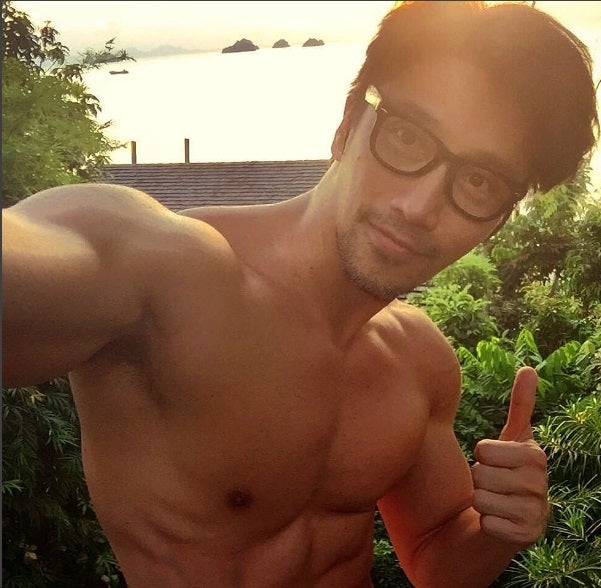 How does 51-year-old Chuando Tan maintain his youthful look and ripped body?

The answer, my friends, is six poached eggs.

I’m having breakfast with photographer Chuando Tan at Spago at Marina Bay Sands.

Breakfast is a buffet spread and I’m curious what he’ll choose to eat.

After all, this is the man whose youthful good looks and washboard abs have made him an Internet sensation.

Over the past three weeks, websites from Australia to America have wondered how a 50-year-old could have a face so well-preserved and a body so chiseled. What is his secret, they have all asked.

“Singaporean male model defies the ageing process with ripped abs and baby-face skin – so, can YOU guess how old he is?” screamed a Daily Mail headline. “Is this guy a real-life Dorian Gray?” asked the New York Post.

So here we are, at the buffet station, and while I pile my plate with French toast, pancakes and scrambled eggs, I overhear Tan telling a waiter: “Six poached eggs.”

I wonder if I’ve heard correctly but sure enough, a plate of six white, wobbly eggs is delivered to us a few minutes later.

On another plate, he has chosen a small slice of French toast and a small helping of grilled vegetables.

Do you eat eggs every day, I ask. “I try to have my protein intake,” he says, proceeding to separate the white from the yolk. “This is embarrassing. Very uncivilized, right?” he says of the cut-up eggs. “You want some?” No, thanks, I say.

Do you eat the yolks, I wonder. “I think having two yolks is fine. There are reports saying that yolk is good. I don’t know, cannot keep up.”

It’s not been easy fixing a date with Tan, one of Singapore’s top fashion photographers. His schedule is busy and one recent assignment saw him flying to Beijing to photograph Chinese actress Angelababy.

A few days earlier, Tan had checked out Spago for a fashion shoot he is planning, and discovered that the sunlight streaming into the 57th floor at 8 a.m. is – in the words of his manager – “amazing”.

He asks to do his photograph at that time, and instead of him returning for lunch, I suggest we do breakfast instead.

From his Instagram photos, I’m expecting someone beefy. In person, though, Tan is lean. He explains that he’s been taking it easy at the gym since April because he hurt his shoulder while carrying weights.

Tan has peppered his Instagram with holiday photos and about two dozen bare-bodied photos showing off his very impressive biceps and abs. He now has 424,000 followers.

I’m also expecting someone who may be arrogant because I’d heard how exacting he can be as a photographer. He surprises me by being shy. He speaks in gentle tones and apologizes that his English isn’t good, and seems genuinely perplexed by the attention.

He looks executive-like in Calvin Klein shirt, Topman trousers and Cole Haan shoes without socks. Up close, he really can pass off as someone in his 20s. For one thing, his complexion is flawless. His skin is firm and blemish-free and I see no shadows under his deep-set eyes although he had a late night. And, I can vouch, he doesn’t use foundation either.

He does have laugh lines around his eyes and frown lines. The Ray-Ban frame he sports, which gives him a Clark Kent look, isn’t so much a fashion accessory as reading glasses for his presbyopia.

But his teeth are very white and his full head of hair is black.

Yes, he replies without hesitation, and also his moustache and goatee because he does have greying strands. “I think salt and pepper is quite cool but it’s not there yet,” he says. “It’s just a little bit here and there – not nice.”

His skincare routine is simple, he says when I probe. He doesn’t use many products because his skin is sensitive.

Have you had any procedures done? He says he tried Botox once around his eyes but didn’t like the result and hasn’t done it again.

As for his physique, he’s a strong believer that diet is very important. “You are what you eat,” he says, and abides by the theory that how your body looks is 70 per cent due to the food you consume, and 30 per cent about exercise.

“You wouldn’t want to look like a hamburger, right? I would rather look like a mean, lean chicken breast”, is how he puts it.

He doesn’t diet but tries to eat healthily. For protein, he goes for eggs, chicken and fish in soup. He eats rice but not that much. He avoids coffee and tea but drinks plenty of water, and he does not smoke or take alcohol.

It’s not like he never indulges. Ice cream is a weakness and he loves durians.

And if you must know about his exercise routine, a good week would see him at the gym five times, for a maximum of an hour and a half each, but he often manages with just three sessions a week. He doesn’t run because of a knee injury but does speed walking on the treadmill, and he swims.

Subjecting himself to such scrutiny was not something Tan was looking for.

In February 2015, he started an Instagram account, @chuando_chuandoandfrey, because some friends told him that clients these days would want to know how big a social media following a photographer had.

He posted photos of his work as part of ChuanDo & Frey. He and photographer Frey Ow, 41, who’s also at breakfast and takes the photos for this story, teamed up to shoot 13 years ago.

Tan also peppered his Instagram with photos of himself, like hamming it up on holidays. There were also about two dozen bare-bodied photos showing off his very impressive biceps and abs. “I’m so vain lah,” he says of these personal snapshots.

By last month, he had garnered 95,000 fans – a very decent though not astronomical number. Then, overnight, he was “discovered”.

“One morning, I woke up, checked my phone and saw that my followers had increased to 105,000,” he recalls. He thought there was a mistake, then realized he had a ton of messages too. “I was like, sh**, man.”

He soon discovered that a Chinese news website, Yidian Zixun, had run some of his Instagram photos in a story about how there was a Singapore man who was 50 but looked 30.

The story went viral, as did his account, and, soon, media outlets around the world had stories on him. He was inundated with interview requests.

He also got strange messages, like someone asking him to post a photo of his toes. Toes, I ask? “Ya. Foot fetish,” he says, shaking his head.

There were requests for him to be a stripper. “Probably I’ll consider it,” he says, deadpan. He sees my look of surprise and says: “When I’m 80. Save the best for last.” He breaks into a guffaw.

He was overwhelmed by the attention and stayed home for the first two days after his story went viral. He now has 424,000 followers.

Some friends have advised him to make the best of the fame while it lasts – not many 50-year-olds get modeling offers, after all. But he also worries that it might hurt his image as a photographer.

There are haters who accuse him of creating publicity for himself, and those who ask why he isn’t acting his age. He shrugs them off.

“They said, ‘please stop it. Don’t do this, you’re 50 years old’, like, wow, so is there like a standard behavior that I’m supposed to follow? Send it to me, then I take a look. People are like that. We are more comfortable when everybody is the same, right?

“As long as you’re good to your parents, people that you care for, people around you, and to whoever your God is, that’s good enough. You’re so small, how are you going to please the whole world?”

If he sees any good out of all this, it is how some of his fans say his photos inspire them to take better care of their health and bodies.

Being in the limelight is not actually new to him as he was at one time one of Singapore’s top male models and had a short career as a Mandopop singer.

He was born Tan Chuan Do and grew up in Toa Payoh, the youngest of three children. His late father was respected Chinese ink artist Tan Tee Chie. His mother died when he was 31.

He studied at Nanyang Primary and later Pei Dao Secondary, then got a diploma in graphic design from the Nanyang Academy of Fine Arts.

He started modeling at 16 and when he was in his 20s, sang under the name Chen Yufei. But showbiz wasn’t for him because he has always been very shy, he says, conceding that “I might not look it”.

He went into photography and has done work for big fashion titles and the cover of Janet Jackson’s 2008 album Discipline. He also set up a modeling agency, Ave. In recent decades, he has been happy to keep a low public profile – and then the Instagram story broke.

Tan, a bachelor, says his life revolves around his work, gym and friends. For now, he is keeping an open mind about his newfound fame, but takes “everything with a pinch of salt”.

We wait for the lift to take us down from the 57th floor.

Where is my car key, he asks suddenly, patting his pocket.