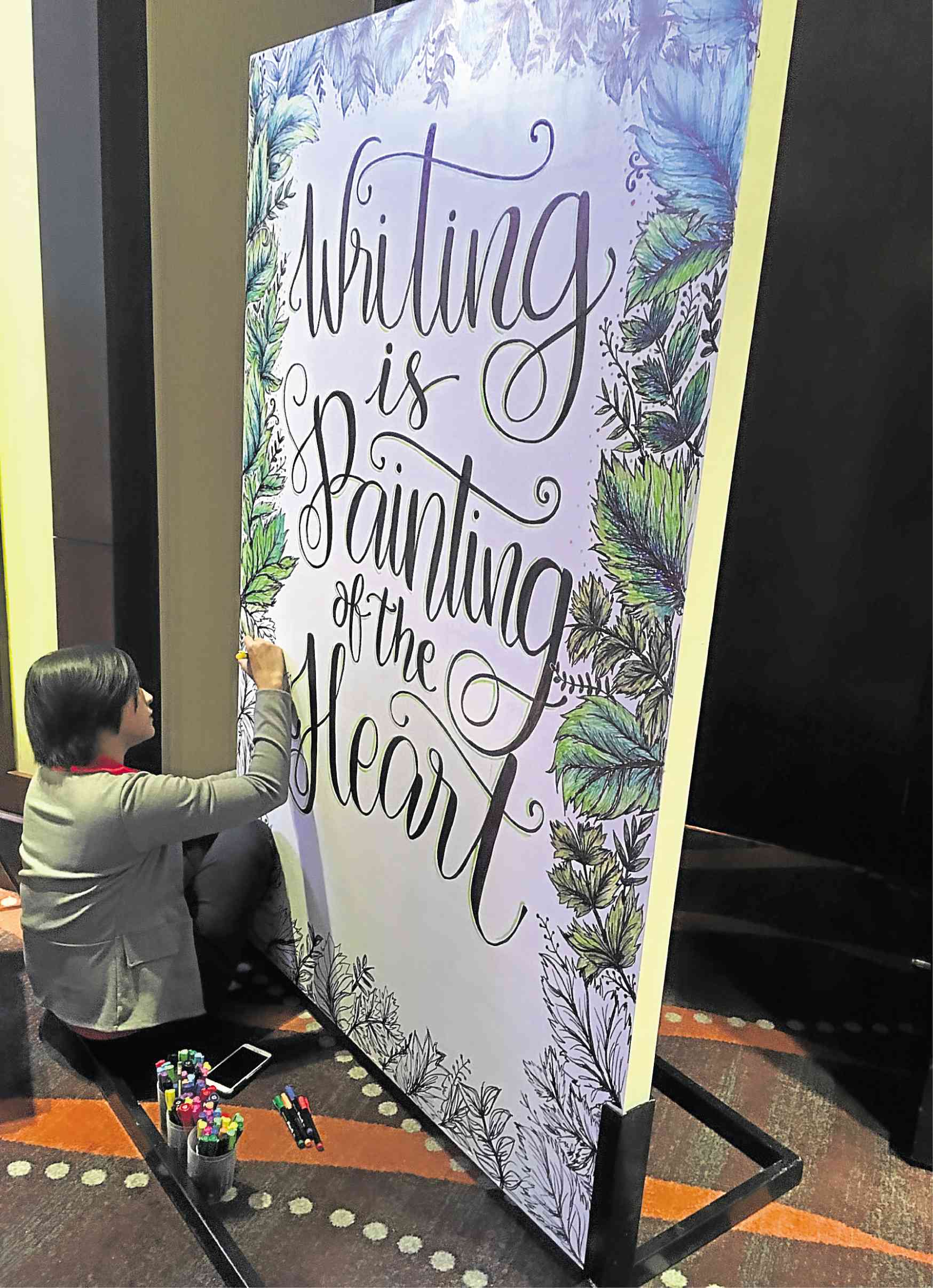 The literary festival is not just about books, it’s about art, too. —PHOTOS BY CAKE EVANGELISTA

Organized by National Book Store and Raffles Makati, the annual literary festival set up as many as 44 talks, panel discussions, book launches and signings, and writing and art workshops (and even an impromptu rap performance) that in one way or another championed Filipinos’ love for literature and stories.

Danielewski, known for his award-winning novel “House of Leaves,” is the type of writer who isn’t afraid to force readers out of their comfort zones. “I always put my faith in the reader. There are readers who want to excel at reading because they understand that it’s a way to increase their own imaginative capabilities.”

He constantly experiments with the book’s form, pushing the boundaries of print and storytelling to places no author in recent memory has done. His books aren’t just words printed on paper; they are experiences that must be lived through to understand.

“I think the most important thing a book should offer isn’t necessarily the story… but an experience you can’t get anywhere else,” Danielewski said during his talk. “What I spent decades on is going to unfold in the reader’s mind and heart in a way nothing else can.”

He spoke about writing at a young age (at 10, he wrote “The Hellhole,” about a cocaine addict), a fateful meeting he had at Burning Man festival, his cats, and how fiction can be a way to make sense of reality.

“Fiction is opening up a way of understanding reality,” Danielewski said. “It grants us an emotive connection to the story that’s unfolding, not so much to replicate it, to necessarily make sense of it, but to represent it, so we can begin to experience it, and then draw our own conclusions and make wise choices.”

Author of the immensely popular “Red Rising” trilogy, the charismatic Brown brought a different kind of energy to the festival. He was welcomed at Ballroom 2 of Raffles Makati like a Hollywood celebrity, with shrieks from his fans and flashes from their cameras.

The New York Times best-selling author, whose books have been optioned for film, talked about his journey to become a published writer, which wasn’t all rainbows, unicorns and viral Buzzfeed articles.

“Red Rising,” his debut novel, was actually his seventh book and was rejected 29 times before being picked up by his current agent. “Through the first six books, I was emulating the voices of people that I respected,” Brown said. “For me, it was Neil Gaiman, JK Rowling. Those six books that I wrote weren’t my voice. They were me trying to do the voices of other people.”

During the talk, Brown also detailed his enjoyment of Filipino food (“Adobo and I have a relationship now”), his Palawan vacation, his future fantasy novel plans (“‘American Gods’ meets ‘Harry Potter’”) and his hope that his readers would be inspired by his books to pursue their own dreams.

“Any book is created on the foundation of failures. It was created on thousands, endless hours of toil. You should realize you will probably fail several times,” he said. “But if you really love it, those failures will be the foundation you’ll build everything else on.”

With no age restriction again this year, the workshop received entries on a whole gamut of life experiences: unemployment, a trip to an impoverished community, love, the Marawi crisis, motherhood, grief, religion, and the dark side of humanity.

The evolving role of the writer, especially in the age of social media, was the topic du jour in the panel discussion featuring writer AA Patawaran, novelist Samantha Sotto and romance author Mina Esguerra.

Though she eschewed Twitter and Facebook in the past, Sotto (“Before Ever After”) believes this “artificial and invasive” tool can be transformed into something genuine.

“If you share authentic things, you get authentic responses and create authentic relationships. You’re no longer the sole champion of your book. You have readers who become real friends, who campaign for your book as passionately as you do,” she said.

Esguerra (“My Imaginary Ex”), for her part, said another way authors can put themselves out there is by joining communities.

She talked about wearing various hats (reader, mentor, publicist) for #romanceclass, a group of Filipino romance authors; inadvertently becoming a publishing agony aunt in story-sharing site Wattpad, and being a patron of WOC In Romance, a global community promoting romance novels by women of color and transwomen.

CNN Philippines Life, on its second time in the literary fest, put a spotlight on stories about love and romance across different kinds of storytelling mediums.

The culture website invited film directors Samantha Lee (“Baka Bukas”) and Prime Cruz (“Sleepless”), television writer Benedict Mique (“On the Wings of Love,” “Till I Met You”) and romance author Esguerra to deconstruct romance and discuss how it has evolved as a genre in their respective fields.

The speakers talked about their different philosophies on writing about love for their work. For Esguerra and Mique, the idea of “happily ever after” is expected, nonnegotiable even, when it comes to writing romance in books and in “teleseryes” for love teams. In indie filmmaking, as Lee and Cruz pointed out, there is more freedom in how love stories are told.

A panel discussion featuring book bloggers also tackled one of the hottest and most-talked-about issues in book publishing today, especially in young adult (YA) literature: diversity.

Diversity in literature, as blogger JM Cabral said, “gives all kinds of readers the opportunity to see themselves in books, in stories.” It isn’t limited to race or color; it includes representations of religion, culture, gender, body or size, physical disability and mental health.