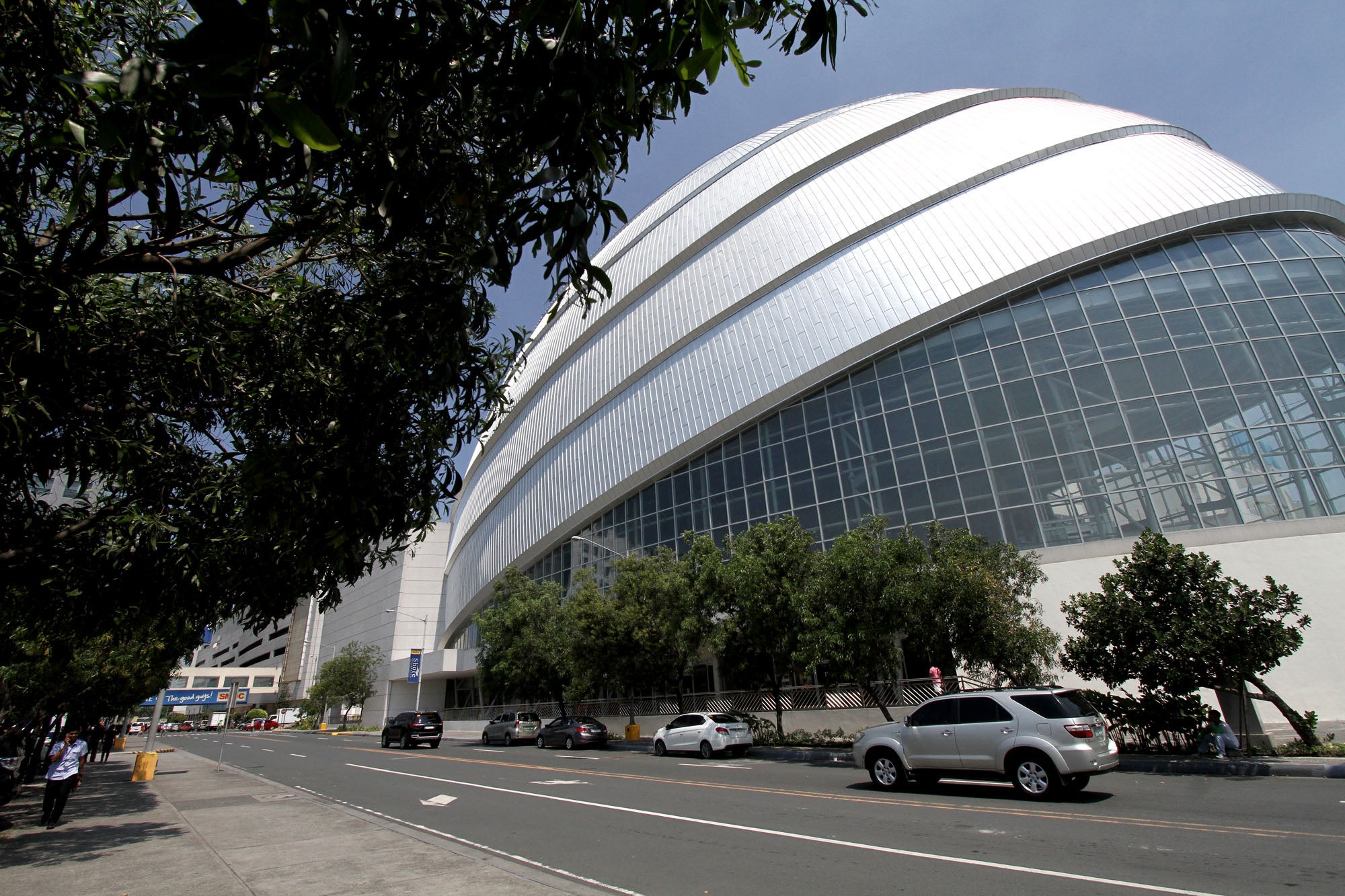 The Galeon museum rises at the SM Mall of Asia complex. —RICHARD A. REYES

Museo del Galeon to relive romance of the high seas

Former Senate president Edgardo J. Angara had called it an “executive preview” while the Department of Foreign Affairs (DFA) had termed it “a soft-opening,” but there was no doubt the whole affair sought to relive the romance of the Manila-Acapulco Galleon Trade that historians now admit pioneered global inter-ocean trade as we know it now.

Held on the eve of the 50th anniversary of the Association of Southeast Asian Nations (Asean) on Aug. 8 in Manila, the event gathered visiting Asean ministers and dialogue partners to The Galeon, the museum being constructed at the SM Mall of Asia on Manila Bay in Pasay City. Hosting the affair were DFA and Angara, who chairs the Museo del Galeon Foundation.

The museum is being built on 5,000 square meters of land donated by the SM Group. When it is finished, it will have three stories and 8,000 sq m of exhibition space. There will be five permanent galleries and a temporary exhibition space. The centerpiece will be a full-scale replica of a galleon.

Angara, in his welcome remarks, said the galleon trade that ran for 250 years from 1565 up to the early 19th century, connected four continents and stimulated trade between more than 40 countries. Traded were the silver of the Americas for the silk, spices and plants, textiles and garments from Asia. Angara said the trade was “the forerunner of the global trade.”

“And so,” the former senator continued, “it’s quite appropriate that we are introducing this galleon museum, on the occasion of the 50th anniversary of the Asean.”

Angara explained that of the 10 Asean countries, “eight of them were shippers on the galleons; and of the seven dialogue partners, five of them were big, big shippers, including China, Japan, US and India.”

He added that if the Asean’s slogan was “partnership for change,” then the galleon trade was “a game-changer in the world because, even now, we’re harking back to another Silk Road, to another trans-Pacific path.”

While the trip from Manila to Acapulco took six months, and before that, it had taken Marco Polo three years to reach China from Europe, 21st century global trade is set to be vastly hastened by China’s planned Belt and Road project, Angara said. This would bring Asian goods to Frankfurt and Berlin, “maybe even Norway,” in 21 days, Angara said.

“So, that’s how the world is getting connected and rapidly,” he pointed out. “That’s how communication has quickly transformed our world, and we must hope that the transformation is for the better.”

Angara has long worked to bring to international attention the global historic importance of the Manila-Acapulco Galleon Trade that took place right at the start of Spanish colonization, 1565, and lasted up to 1815.

As a result of his campaign, the United Nations Educational, Scientific, and Cultural Organization (Unesco) has declared Oct. 8 every year as “Dia del Galeon.” Mexico and the Philippines with backing from Spain have also nominated the galleon trade for inscription in the Unesco World Heritage List.

Just recently, Penguin Books has published as part of its Penguin Specials series “The Silver Way: China, Spanish America and the Birth of Globalisation, 1565-1815.” Written by Peter Gordon and Juan Jose Morales, the book makes comparisons between the Silk Trade and “la ruta de la plata” (the silver way) of the galleon trade, which brought the finest goods of Asia to the Americas via the galleons, returned to Asia with the silver of the New World. Although the book obviously plays the China card and growing Chinese economic ascendancy in order to appeal to Westerners, not mentioning the Philippines or Mexico in the title, it gives credit to Philippine manpower and materials in the building of the galleons, which were the biggest and sturdiest ships of their times.

Gordon and Morales call the galleons built by Filipinos and from local materials “a precursor of today’s world-leading Asian shipyards.” The galleons were locally designed and made from locally supplied materials, constructed by local labor augmented by Chinese hands. “The galleons’ reputation for durability and sturdiness was built upon the local hardwoods: the ships were relatively impervious to both cannonfire and shiprot.”

In his remarks, Angara said that of the 400 galleons that traversed the Pacifc during the 250 years of trade, “only four of them were built in Acapulco.” “The rest,” he pointed out, “were built in Manila, using local hardwood and local workmen. And the galleon was a joint effort between the artisans from China and the workmen from Cavite, Mindoro, Pangasinan and Bicol.”

“Silver Way” also gives credit to the Augustinian friar-missionary Fr. Andres de Urdaneta for having discovered the “tornaviaje,” the return route from the Philippines to Mexico and Spain in what would be the second circumnavigation of the globe. Coming from British publishers, “Silver Way” is a belated correction of Anglo-American historical black propaganda against the Spanish colonial record—what has come to be known as “la leyenda negra.”

Philippine nationalist historians have so imbibed “the black legend” that they have dismissed or even totally ignored the Manila-Acapulco Trade, if only to insist on their distorted thesis that Spanish colonization brought the Philippines nothing but superstition, obscurantism, and backwardness.

But the Spanish record is incontestable and consistent.

An American historian, Shirley Fish, in her “The Manila-Acapulco Galleons: The Treasure Ships of the Pacific” (Authorhouse, 2011), called the huge ships “transpacifc treasure galleons” that carried back to Manila as much as 2.5 million silver pesos and “a yearly silver subsidy of 250,000 reales for the maintenance of the colonial government in the Philippines.” The money went to the development of Philippine agriculture and economy.

Historian Benito Legarda called the galleon trade “the longest shipping line in history.” “In the context of late-16th-century East Asian commerce, the Philippines-Mexico Trade was the one completely new and important creation, stimulating a greatly increased traffic between China and the Philippines even while the rest of the traditional framework of Asian Trade remained largely the same.”

Moreover, according to Legarda, the trade made Manila “the first primate city in Southeast Asia ahead of regional centers, which attained the status only in the nineteenth century.”

Although physically separated from the Asian mainland and thus the last to receive major cultural influences from there, the Philippine islands were enabled by the Manila-Acapulco intercontinental exchange to receive “trade flows from all directions.”

Legarda, in his book, “After the Galleons” (Ateneo de Manila University Press, 1999), puts it colorfully: “A capsule summary of the galleon trade is that it attracted silks from the north, spices from the north, and cottons and ivory from the west, exchanging them for silver and friars from the New World.”

Aside from the galleon, Spain, through the royal cedula of March 10, 1785, established the Royal Company of the Philippines, whose aim was to engage in the spice trade and, while vested with monopoly of Philippine trade, allowed ships from different Asian countries to dock in Manila to deliver the spices.

The company was a boost not only to world trade but also to Philippine agriculture and commerce since it provided credit and financing on easy terms. Auxiliary branches of the company were established in Ilocos, Bataan, Cavite and Camarines, improving agriculture and industry there: It bought lands for cultivation and distributed farm implements to farmers, established textile factories, and gave out awards for outstanding economic achievers.

Because of the outstanding economic achievements of the Royal Company in the Philippines, Spain was ahead of most colonizing countries in opening the Philippines to free commerce.

“While Holland did not allow any foreign boat to engage in the Batavia-Amsterdam Trade and England reserved the opium monopoly in China to her India Company,” wrote the late historian and Philippine consul to Madrid Antonio M. Molina: “a Royal Cedula of the King of Spain in 1785 opened the port of Manila to ships of all nations.”

With poetic conceit but with an all-encompassing worldview, Nick Joaquin called the Manila Galleon “the first medium to reduce the world to a village.”

If only to raise international historical awareness about the galleon trade, the museum will serve as a “research and cultural center on maritime trade,” Angara said. “The Galeon Museum will exhibit valuable artifacts, relics and documents depicting the 250 years of the galleon voyages, the precursor of the present day global trade.

“And for us, in the Philippines, this galleon is a teaching museum,” Angara added. “We want to teach our children that our forebears, our ancestors, did something worthwhile, not simply for themselves, but for the material and cultural enrichment of the planet.”