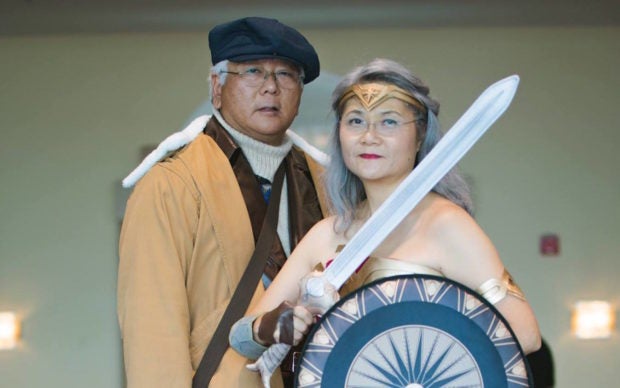 A senior couple known as Cosplay Parents had their latest look inspired by the recent “Wonder Woman” movie.

Proving that cosplaying is for anyone of any age, the comic/costume-loving pair dressed in their own versions of Diana Prince and Steve Trevor based on the outifts in the DC Extended Universe film.

I can save the day but you can save the world. The lovely @CosplayParents as Diana Prince and Steve Trevor. pic.twitter.com/dXbSFrYZKa

“Wonder Woman” director Patty Jenkins took notice and was awed by their rendition.

So touching and amazing! Love them. https://t.co/maAPfK1cNY

“So touching and amazing!” she wrote.

The Cosplay Parents shared the love: “Keep up the great work, you inspire us all & can hardly wait for the next WW movie!”

Both Jenkins and actress Gal Gadot are known to recognize fans’ cosplays, such as that of two Sri Lankan girls who were allegedly cyberbullied for dressing up as Wonder Woman.

The look so great, strong and beautiful!!! Such amazing work and costumes. @GalGadot https://t.co/RqjbOd8bDb

According to a feature from the Marvel Report, Steven and Millie Tani are both retired and have been married for 28 years.

They have also dressed as Captain Steve Rogers and Agent Peggy Carter from “Captain America,” Mary Poppins and Bert, Nick Wilde and Judy Hopps from “Zootopia” and Han Solo and Leia Organa from “Star Wars.”

Getting into cosplay was something of an accident; their daughter has been doing it for eight years but they never thought of trying it.

It was only when they wanted to attend a Disneyland Mickey’s Halloween Party in 2014 that they tried going in costume.

Initially shy as they were dressed as Carl and Ellie from the Disney Pixar movie “Up,” the couple were encouraged when someone dressed as the character Russell wanted a photo with them.

The costumes are DIY: the two admit to going to thrift shops and modify them. “The fun and accomplishment is making it yourself,” they told the Marvel Report.  Niña V. Guno /ra