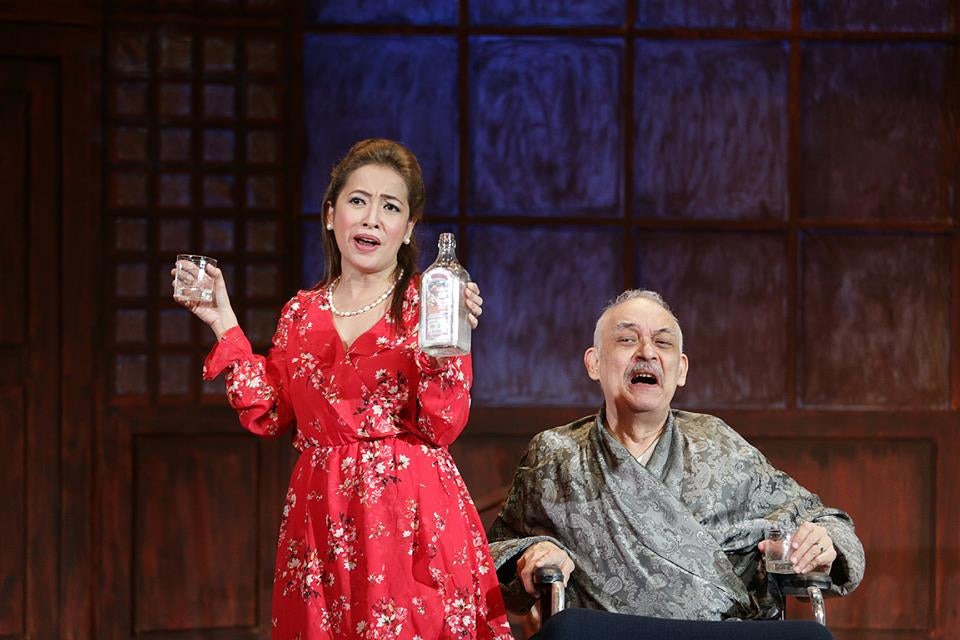 On Nick Joaquin’s birth centenary, a fresh take on his ‘Fathers and Sons’

“I like Nick Joaquin. He has affected me, like most of us. His works have touched, continue to touch generations,” Mabesa told the Inquirer before the opening of Joaquin’s “Mga Ama, Mga Anak/Fathers and Sons,” the 26th Season opener of the University of the Philippines Playwrights’ Theater, now ongoing until Sept. 24 at the Wilfrido Ma. Guerrero Theater in UP Diliman.

Since high school, Mabesa had been an avid reader of Joaquin’s reportage (as journalist Quijano de Manila) in the Philippines Free Press magazine. Years later, as an actor-director, Mabesa would find himself doing a number of Joaquin’s works.

But it was only when he directed “Larawan,” the musical adaptation in Filipino of Joaquin’s “A Portrait of the Artist as Filipino,” about 20 years ago, that he had his close encounter with the great literary figure. The original director and librettist, Rolando Tinio, succumbed to heart attack on July 7, 1997, a few days before the musical’s opening at the Cultural Center of the Philippines.

Mabesa was asked by Tinio’s children and the producers, Girlie Rodis and Celeste Legaspi of Musikat, to take over.

“Usually ‘pag nanonood ‘yan [referring to Joaquin], may dalang beer, maingay,” he recalled. “Lumapit sa akin after one performance and asked me to restore some scenes of Paula (Marasigan, one of the lead characters) that Rolando toned down. Well, between the living and the dead, I had to follow the wishes of Nick Joaquin.”

The musical was a hit, and had a re-staging the following year.

For “Fathers and Sons,” Mabesa also did some revisions in the Filipino adaptation written by Joaquin’s close friend and fellow Free Press writer-editor, Jose “Pete” Lacaba, in collaboration with National Artist for Literature Virgilio Almario.

“‘Yung dulo, nawala, ‘yung magbabasag sa lamesa. I asked Pete pero I got no answer so I did the revisions, about two pages lang naman,” he said.

To be touched, literally, by Joaquin at an early age is something actress Adriana Agcaoili is mighty proud of. By “early,” we mean newborn, when Agcaoili was baptized and Joaquin carried her in his arms as her one and only godfather; the godmother was Ivi Avellana-Cosio, daughter of National Artists for Theater Lamberto and Daisy Avellana.

Agcaoili’s father, journalist-short story writer-scriptwriter-editor Teofilo Dumlao “TD” Agcaoili, was a contemporary of the equally multihyphenate Joaquin in the glory days of Philippine journalism, when print was king and journalists were jolly beer-guzzling knights of the round table. TD was writing for the Sunday Times Magazine while Joaquin was with the Philippines Free Press; their office buildings were neighbors in the old Avenida Rizal and Recto avenues in Sta. Cruz, Manila.

For many children whose parents were friends or colleagues of Joaquin, the future National Artist for Literature was a constant figure on special occasions like Christmas. “He would meet my family in the old San Mig Pub and, besides cash gifts, I remember that, on separate occasions, he gave me two editions of his ‘Pop Stories for Groovy Kids,’” said Agcaoili.

Now, decades later, she is appearing in “Mga Ama, Mga Anak,” alternating in the role of Sofia, the patriarch’s daughter-in-law, with Issa Litton. Her father and godfather are no doubt nodding approvingly in heaven.

“Fathers and Sons” was Joaquin’s 1976 adaptation of his classic short story published in 1940, “Three Generations,” about the fraught relations of a patriarch and his family amid changing times. Zacarias Monzon, once the powerful carretela king of old Manila, is played alternately by Leo Rialp and Menggie Cobarrubias. His son Celo is played by Rody Vera, George de Jesus III and Greg de Leon, and his spinster daughter Nena by Stella Cañete-Mendoza and Banaue Miclat-Janssen.

“Fathers and Sons” was written in 1976, the year Joaquin was awarded National Artist. In January 1977, it was staged by the Philippine Educational Theater Association under the direction of Lino Brocka. In 2014, Tanghalang Pilipino re-staged it, directed by Joel Lamangan.

Here’s an opportunity to be—as Mabesa put it—“touched, like only Nick Joaquin can do.” —CONTRIBUTED