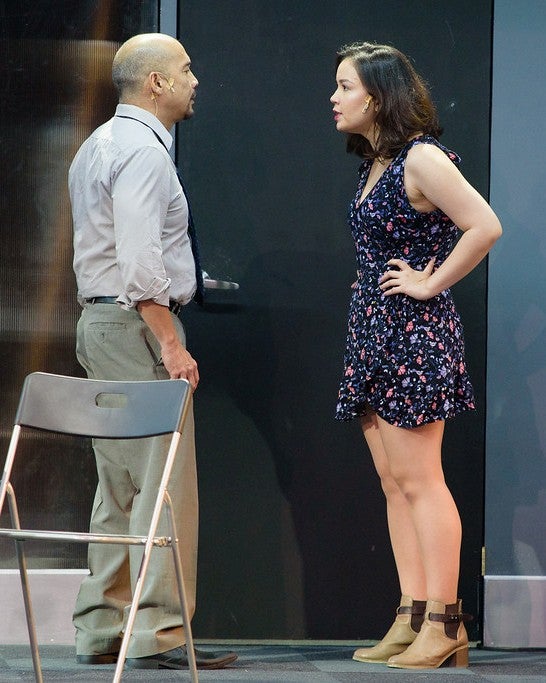 Mounting a play that explores taboo sexual subjects takes a lot of courage. Not everyone can sit through 90-120 minutes of a production that brings to light topics that can make audiences squirm in their seats. Oftentimes, the gauntlet hurled at the play’s creative team is to lure the audience into a world of grays that blur the line between what’s acceptable and what’s forbidden.

The audience may not accept or approve intellectually what the characters are doing onstage, but if they can empathize with their experience, then half the battle is won. That kind of shared experience can lead to a more productive discussion on so-called loftier ideas like morality, society, censorship and freedom.

The Necessary Theatre (TNT), never one to shy away from such issues, tackles one such kind of forbidden love—pedophilia or child abuse—with its current production of David Harrower’s “Blackbird.”

In this case, the pivotal “love story” between a 12-year-old girl and a 40-year-old man is recounted and relived by the characters more than 20 years later.

Una (Mikki Bradshaw-Volante) is now a grown twentysomething woman and Ray (Bart Guingona) is a 55-year-old office employee living a new life with a new lady and a new name. The intense, crackling dialogue that erupts between them would reveal the shared fate that almost destroyed them both: Ray was arrested and jailed for statutory rape, while Una was ostracized by her community.

While Ray seems to have moved on and has attained some measure of healing, Una apparently has not. After accidentally seeing his picture in a newspaper, she seeks him out in his new workplace, threatening to unleash hell should he ignore her.

Clearly, it is Una who is the driver of the plot. Is she after closure? A more adult understanding of his motives back then? Mutual forgiveness? Or—a heretical thought—even some form of reconnection, or another romp?

Harrower’s play rearranges the boundaries between victim and perpetrator this way. Ray, played by Guingona with his usual superb attention to complex character-building, denies he is the kind of sex offender often seen in crime shows. He says his seduction of the 12-year-old Una was born out of genuine love, and not from some sick disease.

Volante’s Una, meanwhile, seems stuck in her past, unable to forge meaningful relationships and create her own happiness—perhaps not until she gets whatever justice she seeks from the man who ruined her life.

Harrower’s play won an Olivier for Best Play and also garnered several Tony Award nominations. Critics have universally praised it as “disturbing,” “unsettling,” and, yes, courageous. The core of its courage is in presenting sexual abuse (of a child no less) as one that can possibly be a case of mutual affection, a fulfillment of each other’s needs, or, at the very least, an all-consuming addiction that can transcend age and the passage of time.

Director Topper Fabregas literally traps his two characters in a constricted space—an office pantry that mirrors their chaos and confusion with its unkemptness and disorder. No emotional relief is in sight as the two characters tear at each other, and in that regard, neither Guingona nor Volante disappoints.

Guingona’s perpetrator uncannily transitions to father figure, broken jailbird and a nondescript office manager just getting by. That attempt at a steady front is battered and bruised by Volante’s own character, a seemingly cunning conniver out for blood one minute, then a broken little girl the next.

Happy endings are usually nonexistent or scarce in plays like this; a more realistic expectation would be the garnering of insights about the issues lived out by the characters onstage.

But, jarringly enough, after nearly 90 minutes, Harrower introduces an 11 o’clock twist that throws everything that had come before it out of kilter.

Perhaps he wants to jolt the audience out of any remaining complacency they may have. Unfortunately, this final jab does not only break the momentum that Guingona, Volante and Fabregas had meticulously crafted the past hour and a half. It tends to diminish what the characters had gone through, and threatens to simplify the complex landscape of their presented lives.

Without meaning to be spoiler, it’s worth quoting an audience member’s overheard reaction—a simplistic but understandable one—to the play’s resolution: “So, the lady just wanted a f*ck?” —CONTRIBUTED