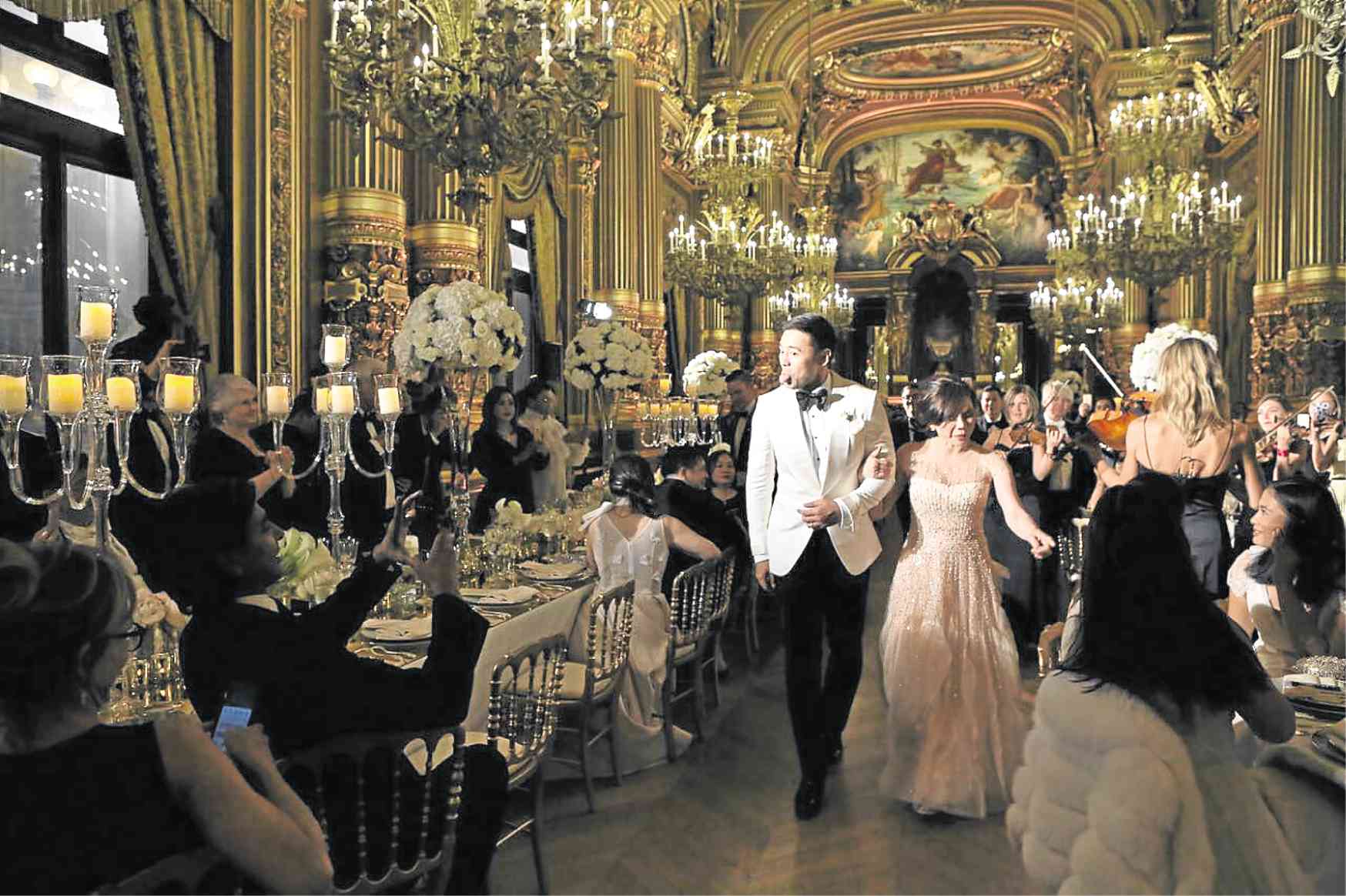 A fairy-tale wedding in Paris

Ultimately, it was faith and fate that brought the union of Doctors Vicki Belo and Hayden Kho Jr. to fruition.

After 12 years of a relationship that can fill up the storyboard of a dramatic teleserye, the celebrated couple finally tied the knot in a beautiful and solemn ceremony at the American Church in Paris last weekend.

Early this year, Yaparazzi event director Javi Martinez already advised me to clear my schedule in early September for the Belo-Kho wedding. Javi’s agency took care of the conceptualization and management of the mega-event to celebrate the the couple’s union.

The wedding was nothing short of amazing. From the elaborate, opera-themed invitation alone, guests could already imagine the extensive planning and preparation involved.

Indicated in the invite were such details as instructions for sharing photos with the hashtag #aKHOandmyBELOved, and the admonition that no photos would be allowed during the ceremony to keep the solemnity of the affair.

The night before the wedding, welcome cocktails were held on a beautiful Bateaux Parisiens cruising along the Seine. The boat at Pavillon Seine departed from Escale de Grenelle at exactly 6:30 p.m.

Host Tim Yap and I started the festivities with photo-taking, with the Eiffel Tower and a European sunset in the background.

During the cruise, I was glad to catch up with Jinkee Pacquiao who I missed seeing at the boxing match in Brisbane. I heard there is a rematch around November, so hopefully our national boxing champ Manny Pacquiao reclaims the belt! I was also delighted that Jinkee has agreed to support our Red Charity Gala on Oct. 14 at Shangri-La at the Fort.

Vicki’s son Quark Henares shared his thoughts and ended with a song number with his girlfriend, Bianca Yuzon.

The wedding ceremony was so heartfelt that during the exchange of vows, I tried, with great difficulty, to hold back my tears for fear of losing my false eyelashes.

In the end, it was the love of God and their daughter Scarlet Snow that sealed the permanent deal of the loving couple.

Seated next to me at the ceremony was Michael Cinco, who created the incredibly bejeweled wedding gown with extensive lace embroidery in a pale blush pink shade. It was one of the most beautiful gowns I have ever seen.

The location of the reception dinner was a “secret” and a surprise as well to the guests. While in the church, and before the reception dinner, guests were given a card indicating their table number. This card served as an entrance pass to get into the “secret” location.

For security concerns, a no-pass, no-entry rule was enforced. I heard from Javi there were some gatecrashers, but they were handled professionally.

The secret venue was the Palais Garnier or the Opera Garnier. The reception cocktails were held at the foyer next to the grand staircase. Overflowing champagne was served while opera singers performed before the well-dressed audience.

Just before ushering the guests to the main dining hall, the newlyweds performed their first dance, with the bride wearing a baby blue gown by Mark Bumgarner.

The main reception dinner hall was absolutely stunning, with giant glass candelabras and white flower blooms all over. The five-course dinner was delicious, presented with so much drama. I was very excited to plan our Red Charity Gala as I talked to the wedding florist Robert Blancaflor about his creation. Bench king Ben Chan and Miguel Pastor were my escorts throughout the evening.

Between the speeches of the best man, the father of the groom, and the couple, Ogie Alcasid and Regine Velasquez performed a beautiful song called “Pangako” and hosted the affair. The couple invited their guests to join the conga line to the next venue for dancing and more celebrating.

It was definitely an unforgettable night of love and fairy-tale dreams coming true. We wish the newlyweds the smoothest road ahead filled with happy adventures and endless enjoyment.

The next day, I flew straight home to celebrate my birthday and the presscon for the coming Red Charity Gala. Still high on the Paris event, I was delighted to attend the unveiling of the original Eiffel Tower staircase display at the Greenbelt 3 Park.

For the first time in history, the Eiffel Tower staircase left Paris to be shown to the Filipino people. Architecture enthusiasts and mall-goers can gaze upon this incredible piece of historical architecture until Jan. 15, 2018.

Gracing the Greenbelt 3 sunken garden, the grand Eiffel Tower staircase—measuring 5 meters in height and 1.7 meters in diameter, and weighing 1.7 tons—is part of the iconic French monument, which was deemed the tallest tower in the world when it was unveiled in 1889.

Demonstrating France’s industrial and cultural strength to the world, the Eiffel Tower became the global symbol of French ingenuity, craftsmanship and engineering perfection.

The Eiffel Tower stood an impressive 300 meters tall, and was built in two years, two months and five days by 250 workers.

Today, Filipinos can see firsthand and appreciate the exceptional structural engineering and proud French heritage through the Eiffel Tower staircase, which is brought to the Philippines through the partnership of Ayala Malls Greenbelt and Janat Paris, the renowned Parisian tea house.

Janat Paris is owned by the Janat family who—through Janat Dores—shares a unique history with Gustave Eiffel, the renowned engineer and architect behind the French monument. Dores and Eiffel’s common history and friendship led to the creation of the Janat French Oak Tea, which was first served at the inauguration of the Exposition Universelle in 1889.

Today, Janat Paris celebrates its history and enduring legacy of its patriarch through its premium tea lines. Janat Paris, as a responsible tea producer, also upholds its social responsibility to its women workers through the Foundation Femmes du Monde.