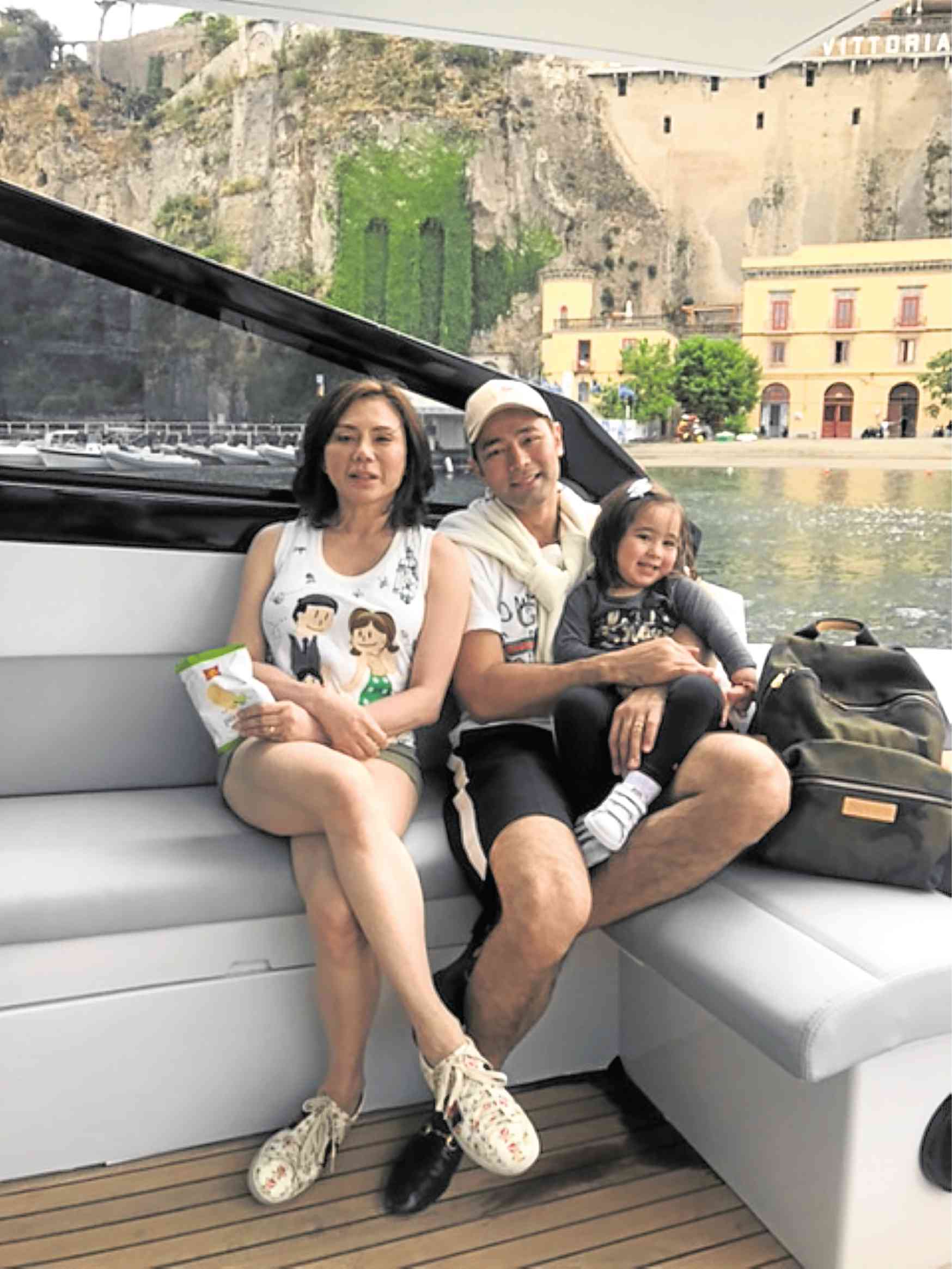 Hayden, Vicki and Scarlet Snow in Sorrento, Italy, where the couple flew for their honeymoon

I had an adrenaline rush covering the wedding of doctors Hayden Kho and Vicki Belo in Paris last week, filing stories online, for print, and posting on social media—several times a day. (It wasn’t easy to do all these in evening wear, but kitten heels do some service to lifestyle journalism—when you can’t get away with dressy sneakers.)

The only time I chilled was at the reception dinner at Palais Garnier when, seated before the newlyweds at the presidential table and beside Hayden’s bosom buddy from grade school to high school, I asked him how Hayden was in campus basketball.

“No, not basketball,” this friend said, “he’s in the glee club.”

Hayden and Vicki noticed my face was breaking into a grin, when his friend, who was so shy he didn’t want his name in print, added, “choral ministry, singing bible songs.” And Vicki could only smile and nod.

The toasts given by Hayden’s dad, Dr. Hayden Kho Sr., best man Anton San Diego and matron of honor Karen Cancio-Litre, made the couple tear up, especially Hayden who, I didn’t know until that night, was easily moved to tears.

Anton said, “Whenever you find yourself doubting how far you can go, just remember how far you’ve come!”

Karen is Vicki’s most amiable sister who’s so caring not only of her own sister and immediate family but also of their cousins like the artist Budji Layug and their friends. Budji designed Karen’s lovely summer home in Provence, and her home in Atlanta, Georgia.

Karen recalled how she saw the couple up close when they stayed with her in Atlanta. She realized how, through the many trials in their union, not even once did she hear either of them say that they do not love each other anymore.

Since the wedding is still the buzz, here are behind-the-scenes tidbits:

No gatecrashers, absolutely. While there were those who lobbied for invites and threatened to gatecrash, it seems the staff was under very strict instruction, even in church, to let in only those on the guest list, which was limited to family and friends.

As early as the night before the wedding, fans had a stake-out in front of the American Church in Paris to make sure they saw the show-biz celebs attending the wedding. Some even had signs bearing Alden’s (Richards) name.

Strictly no photo taking in church. Surprisingly, majority of the guests followed (I almost did).

No yayas. It was fun to see Dingdong and Marian Dantes look after baby Zia themselves, with a diaper/bottle tote (Fendi, no less) slung on Dingdong’s shoulder. It actually looked cool with his tux. Regine Velasquez-Alcasid also sat Nate, her and Ogie Alcasid’s son, at the presidential table where she helped him feed himself. The kids were part of the bridal entourage.

One fashionable father was Arthur Burnand, Georgina Wilson’s husband, who carried baby Archie most of the time or attended to him in a stroller. He did his daddy duty in white tux.

Like her more than 1 million followers on Instagram, the guests couldn’t have enough of Scarlet Snow. At the welcome dinner in the cruise on the Seine, they swooned at the sight of her facing the band, swaying to the sounds yet not sure whether to dance or not, and in the church, they enjoyed seeing her walk and stop and walk again on the aisle, until she was led by the hand by her dad.

What made the family and friends chuckle was her exchange with baby Zia. Scarlet was feeling under the weather during the wedding and Zia was trying to engage her. So “low bat,” 2-year-old Scarlet told her in the cute way only a Scarlet Snow could manage, “I need my space.”

This was one anecdote that was told and retold with good laughter in the wedding.

The “guesstimates” of wedding costs by the media, who had no access to the event, were simply hilarious, if not crazy. The Michael Cinco bridal ball gown was reported to have cost an eye-popping P8 million. Seriously, that amount could have fetched a mini-Chanel collection. Cinco himself said that amount was too much, way off the mark.

I loved the way Tim Yap assisted his life partner Javi Martinez—their Yaparazzi managed the event. Tim was busy leading people to the buses that would drive them to Palais Garnier. Javi didn’t have a big crew—he tapped locals.

Indeed it was a fairy tale-like wedding which we honestly enjoyed. We felt happy finally for Hayden and Vicki.

(Too bad, I came home to the photo of a packaging-taped face.)