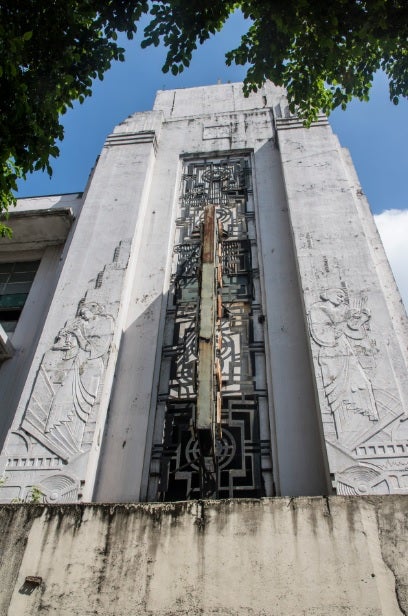 Nakpil’s Capitol Theater on Escolta to be demolished

Given the go-signal by the National Commission for Culture and the Arts (NCCA), National Historical Commission of the Philippines (NHCP) and National Museum (NM), another iconic and important structure in Manila is set to be demolished to give way to a high-rise residential building.

Adding to the list of Manila’s built heritage-turned-intangible or altogether lost is the prewar art deco Capitol Theater on Escolta Street in Binondo designed by National Artist for Architecture Juan Nakpil.

NCCA Heritage Section head Charles Salazar told the Inquirer the property’s developer, Ascott Resources and Development Corp. (ARDC), had made a presentation to the three national cultural agencies “for the in situ methodology for the preservation of the tower and façade.”

The façade includes the bas-relief sculpture by renowned Italian expatriate sculptor Francesco Monti, the teacher of Tin Pan Lay and Virginia Ty. Salazar said the sculpture would be preserved.

Based on the recommendations by the NCCA, NHCP and NM, much of the building will be torn down and the developer was instructed to do a “perfect” replica of the façade, said Salazar.

ARDC was also directed to “prepare complete documentation of the entire existing building including as-built plans, prepare casts of the relief sculptures of the tower for turnover to the National Museum, and install appropriate hoarding/enclosure featuring the original façade” during demolition and the construction of the new structure.

Salazar made it clear the façade and tower would be saved and incorporated into the new structure.

Aside from Capitol Theater, other notable buildings designed by Nakpil include the Quezon Institute in Quezon City; Avenue Hotel and Theater (demolished), Manila Jockey Club, and Philippine Trust Building in Manila; and the reconstructed Rizal House in Calamba, Laguna.

Capitol Theater is going to be the latest heritage building in Manila repurposed using “façadism,” an approach in which the façade of a historic structure is retained in the construction of a newer building.

Similar approach was applied in heritage buildings such as Luneta Hotel in Ermita; Laperal Apartments in Sampaloc; and the old Coca-Cola building in Paco.

Critics have denounced the approach, saying façadism affects the integrity, authenticity and historic fabric of a building.

“That remains to be seen, I hope it is true that the developer will keep the façade,” said former Tourism Secretary Gemma Cruz-Araneta.

In the case of another Monti bas-relief sculpture, “The Furties,” on the façade of the old Meralco Building on San Marcelino Street, Ermita, everything was destroyed.

Adamson University nearby made a replica of the famous sculpture and put it on the façade of one of the buildings on campus.

Cruz-Araneta warned the demolition of the old building and construction of a new one would affect the integrity of other heritage structures.

“However, as they dig and drive piles into the  ground for the foundation of a new structure, the heritage buildings beside Capitol will be adversely affected. Their foundations will be compromised. I think you should ask the owners of those heritage buildings if this is happening,” she said.

“It would be tragic to lose all that,” she added.

The proposed declaration is supported by the Escolta Commercial Association Inc. (ECAI), which has sought to revive the historic commercial district by pushing for the preservation of its heritage buildings.

She said the group had “not really discussed it and from what I know, it’s been gutted from the inside already.”

Advocates for Heritage Preservation head Tito Encarnacion said the lobby should be retained and not just the façade.

“I am not happy with the demolition, but the compromise would be retaining the façade, tower and lobby,” he added. —CONTRIBUTED