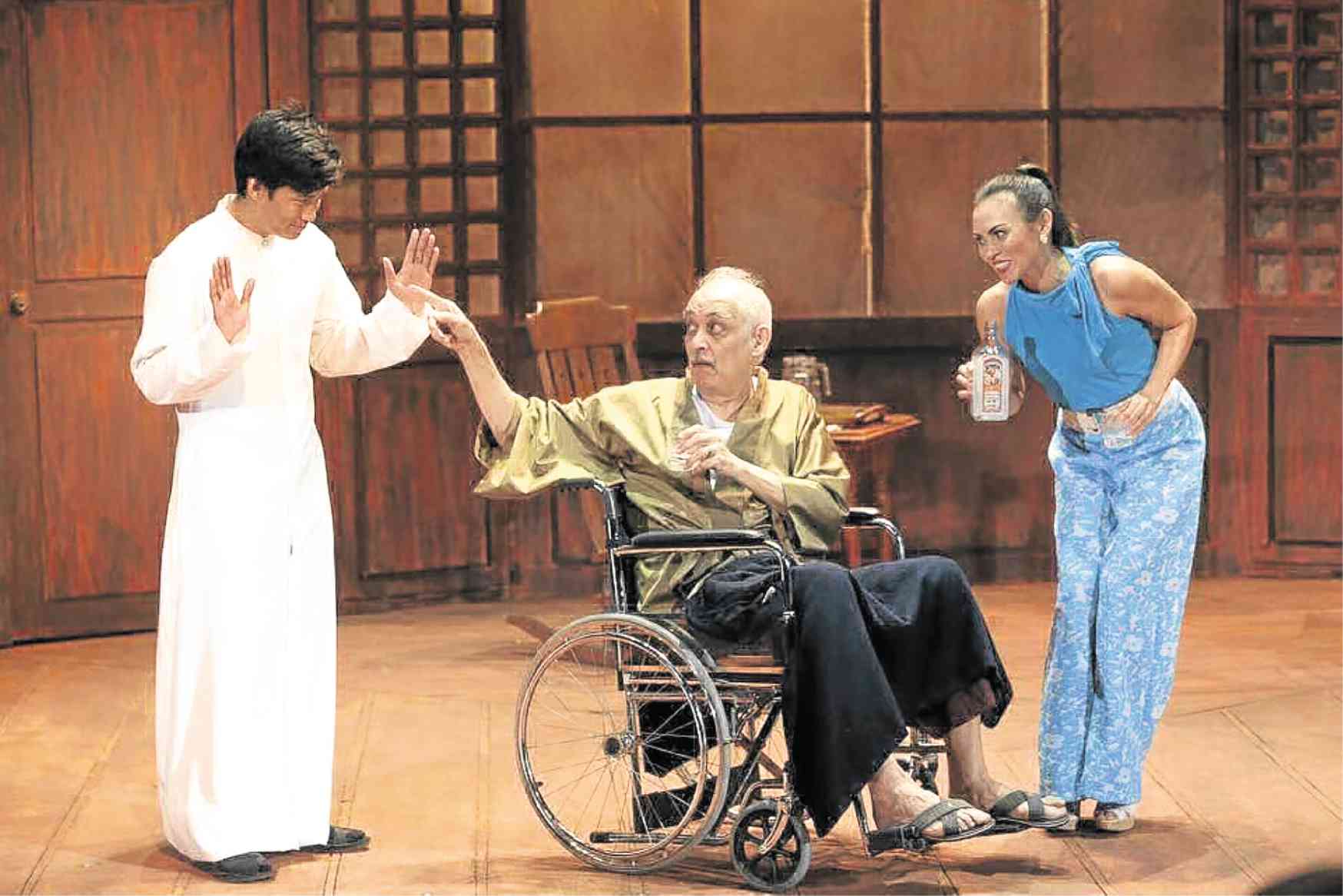 The UP Playwrights Theatre’s current production of Nick Joaquin’s “Fathers and Sons,” directed by Tony Mabesa, has to be the most buoyant interpretation we’ve seen yet of this classic.

Other theater companies’ past versions that we remember tended to focus on the grimmer, downbeat aspects of the story
—the patriarch’s painful fall from glory and the pattern of sons following in their fathers’ abhorred footsteps.

But not so this refreshingly contemporary rendition. By trimming the fat from the material, Mabesa’s take highlights that “Fathers and Sons” can be more a play about redemption than regret.

Joaquin’s sonorous material does have characters that repeatedly retell the rise and fall of patriarch Zacarias Monzon (Leo Rialp, alternating with Menggie Cobarrubias) as the “Caritela King” of old Manila. While time and progress have all but passed the family by, its members remain trapped in the allure and mistakes of the past, until the inevitable reckoning takes place.

Ohm David’s set design, which practically imprisons the characters in a living room of hard-paneled brown walls with calesa wheels etched into them, evokes this faded grandeur and its restrictions.

Resentments and tensions simmer under this veneer, notably between Zacarias and his last remaining son, Marcelo. The two are a study in contrast: the old man still lusty for life despite a crippling illness; and the younger Monzon (Greg de Leon, alternating with Rody Vera and George de Jesus III) now a rigid, censorious party-pooper who has nevertheless attained success by his own effort, on his own terms.

Add to this emotional melee the quest for purpose by the third-generation Monzon, Chitong (Carlo Tarobal, played alternately by Mark Dalacat and Tracy Quila), who is studying to be a priest.

Mabesa and his ensemble infuse the characters with a startling self-respect that arrests what could have been the family’s collective slide into a cycle of mutual antagonism and loathing.

De Leon, while letting his inner scared little boy resurface at the right moments, makes it clear by his posture and carriage that he has created his own life outside his father’s fortress.

Rialp’s passion to return to a full life often overrides his character’s lingering sense of menace and his present insecurities.

Tarobal’s Chitong is another rarely seen interpretation—not a tortured soul seeking enlightenment in the convent, but a rather smug, idealistic well-off kid off to seek another option.

Meanwhile, Stella Cañete-Mendoza’s Nena, Zacarias’ remaining daughter (Banaue Miclat-Janssen alternates), eschews the spinster stereotype to show a strong, sympathetic woman at peace with her life’s choice to be by her father’s side.

Sarina Sasaki as the kind-hearted prostitute is as unapologetic about her decisions and her own identity. (Candy Pangilinan, Paula Benitez and Chloe Jenna alternate in this role.)

Issa Litton almost steals the show as Chitong’s socialite mestiza wife (Adriana Agcaoli alternates). Her joyous embrace of life and unconditional acceptance of other people are a more benign mirror of Zacarias’ younger self. The connection and chemistry between these two are undeniable and electric, and their interactions light up the somber atmosphere.

By cutting the running time to a short but intense 90 minutes, Mabesa leaves the play to focus on taking the characters to a happier resolution more expeditiously. Sometimes, the fast pace ties up some loose ends too quickly—the Chitong-Bessie attraction, for instance, seems forced.

Still, these are small quibbles that vanish in the light of a more optimistic, concise approach that, in the end, renders a picture of an authentic family.

The play ends with images of a fire that finally consumes the long table that has represented the family’s sorrows and joys. As with the Monzon family, hope and life have arisen to replace the shadows. —CONTRIBUTED