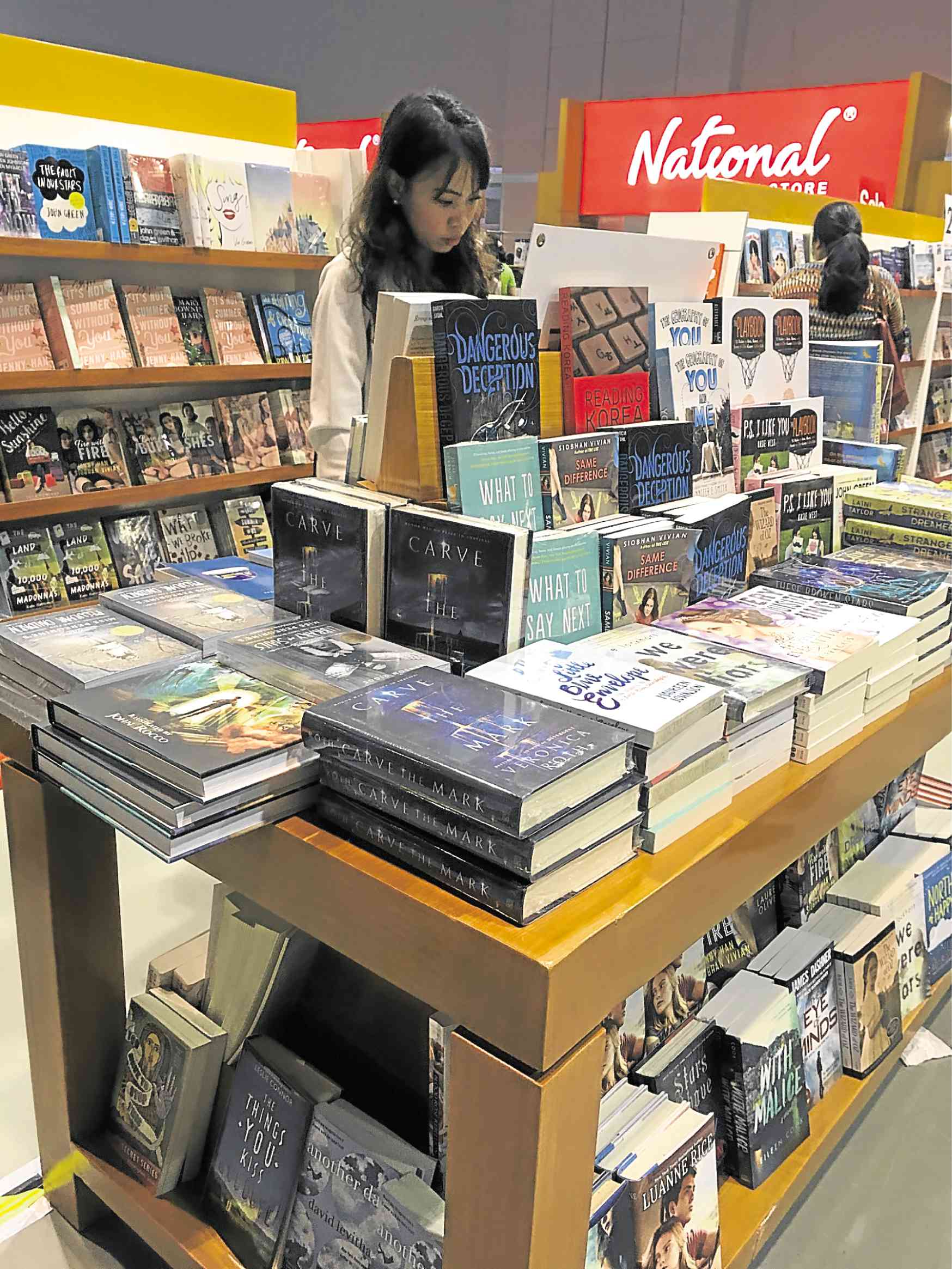 NBS is a book haven for book collectors. —CAKE EVANGELISTA

Manila Int’l Book Fair is bigger than ever

Wallets at the ready, bookworms, the Manila International Book Fair (MIBF) is here.

And it is bigger than ever—literally.

The five-day book and literature event (today, Sept. 17, is its last day) has set up shop at the SMX Convention Center in Pasay City, occupying the building’s two levels with the second floor dedicated to young adult literature, children’s books and digital publications.

Now on its 38th year, the much-anticipated book fair has about 180 exhibitors and participants: from big bookstore chains and indie bookshops, to religious and academic publications and local publishing outfits that offer a wide spectrum of literature genres.

Still the top draw at the MIBF is National Book Store’s massive section.

Taking over a fifth of the MIBF’s main level and a large section on the second floor, the biggest bookstore chain in the Philippines is a book collector’s haven for the young and old.

On the second level, we saw shelves and shelves dedicated to children’s storybooks, activity books and middle-grade series like Lemony Snicket’s “A Series of Unfortunate Events,” Jeff Kinney’s “Diary of a Wimpy Kid” and Rick Riordan’s “Magnus Chase” trilogy, to name a few.

There is a whole table dedicated to J.K. Rowling’s best-selling “Harry Potter” book series, its accompanying books and film-inspired titles. We even spied a pair of Potterheads contemplating which the better deal is: getting the individual hardbacks or buying the boxed set. (The individual versions, we think, but that boxed is The Dream.)

Speaking of Gaiman, if you’ve seen the hypnotically beautiful television show “American Gods” but haven’t read the book, remedy that immediately by grabbing a copy at NBS.

If you’re a fan of Pennywise the Dancing Clown (er, you know what we mean), take a look at horror maestro Stephen King’s other books, too. Our favorite is, of course, the classic “Carrie.”

Young adult (YA) literature fans can’t go wrong by spending hours and hours at NBS. The bookstore has titles from every imaginable genre of YA lit, be it contemporary, dystopian, fantasy or sci-fi. Be sure to check out books by Jenny Han and Siobhan Vivian, who will be at the MIBF today for the last stop of their Philippine book tour.

“Riverdale” fans who can’t wait for the hit show’s second season should take a look at the NBS graphic novel section. It has volumes 1 to 3 of the newest “Archie” comics written by Mark Waid and drawn by various artists including the fantastic Fiona Staples. “Patience” by Daniel Clowes, creator of “Ghost World,” and a graphic novel version of George R. R. Martin’s “The Mystery Knight,” are available as well.

At Anvil Publishing, the best buy would definitely be the discounted boxed set of Nick Joaquin’s “Reportage” books. As a treat, Anvil will be throwing in a free tote when you purchase the National Artist for Literature’s book collection.

Travel junkies, on the other hand, should take a look at Fully Booked’s travel guides section. We saw handy and gorgeous travel books by Lonely Planet that feature some of the most beautiful cities in the world. The world’s biggest travel guide publisher also has transport-specific titles like “Epic Bike Rides of the World” and “Epic Drives of the World.”

Pop culture fans will get a kick out of some of the fan-bait titles we saw at Fully Booked’s booth. There’s the “Mr. Robot” TV tie-in book, “Mr. Robot: Red Wheelbarrow”; gorgeous hard covers featuring Wonder Woman, Liz Braswell’s retellings of classic Disney tales, and “Everyone’s a Aliebn when Ur a Aliebn Too” by Jomny Sun (aka Jonny Sun, aka @jonnysun on Twitter).

Another must-see at Fully Booked is its manga shelf. We saw rows and rows of popular manga titles like “Death Note,” “Attack on Titan” and “Detective Conan.”

We and every book collector metaphorically swooned at the sight of Roads Publishing’s classic and children’s classic collections. The lifestyle brand’s publishing arm’s minimalist design covers transformed each book into a work of art.

If you’re looking for local children’s books, visit the booths of Adarna House and Lampara Books on the second level, and Anvil Publishing and Tahanan Books on the main floor. They have picture books, storybooks, and all sorts of activity books.

One of the coolest story-activity books we saw was Jomike Tejido’s “Si Jepoy Dyip” book series at Lampara Books. Book 6 in the series is a build-a-town activity book in which kids can cut out pictures to assemble buildings and structures featured in the story.

For those looking into starting their holiday gift-shopping this early, the MIBF is a good place to be.

NBS has stalls dedicated to various arts and crafts materials from brands like Sakura Koi, Zig Kuretake, Artline, Stabilo and Caran D’Ache that both hobbyists and professionals would love to find in their Christmas stockings.

We also saw a stall on the second level that sells Funko POP! vinyl figurines and “Star Wars” collectibles at a huge discount. There were children’s toys at the NBS second-level section, too.

For your comic fanboy and fangirl friends, check out back issues of popular international titles at Comic Odyssey on the second floor, and local titles at the booths of Black Ink, Meganon Comics and Visprint on the main level.