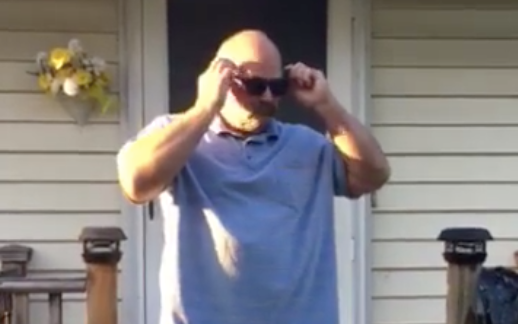 The New Yorker was reduced to tears when he put on his birthday gift: a pair of Enchroma glasses.

(The gift is well-wrapped, so if you want to skip the anticipation, go to 2:44 to see the effect of his new vision on him.)

Being color blind means being unable to see color under normal light, according to the Enchroma website.

According to his wife Pam, Bill has been colorblind all his life and sees almost everything in a brown color, reports The Irish News.

She, her two daughters, and Bill’s sister Paula gave their share to buy the glasses that start at $349 (approximately P17,840).

After putting them on, Bill surveys his surroundings. “That’s weird,” he comments.

He appears stunned, and after realizing he could see color, breaks into tears.

He then adjusts the frames down and up to examine the effect of the glasses. “Oh my goodness. Doesn’t look like mud!”

“The trees don’t even look real. They look 3D,” he says in marvel.

The family was touched by his reaction. Pam further shared in the report, “He has a very hard tough outer shell so for him to break down and cry and get emotional, was pretty emotional to me and my girls.” JB