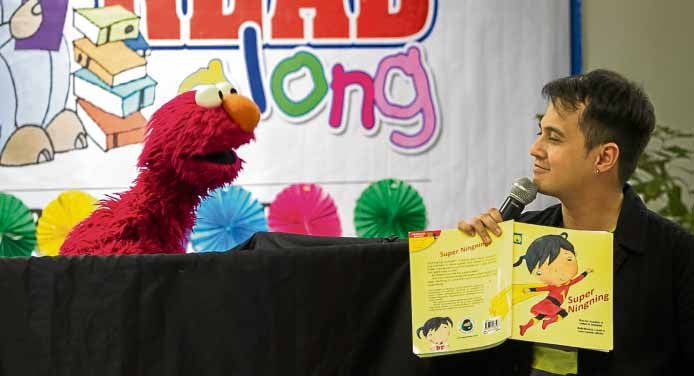 About 50 pupils from Sophia School in Meycauayan, Bulacan, were delighted to interact with the 3½-year-old Muppet character with an orange nose and high-pitched voice during the storytelling.

Andro, 9, learned to be good to others. “Help your friends if they are in trouble or if there is something that they need,” he said.

Amanda, 7, said in addition to helping others, she also learned making new friends.

Elmo is visiting the country for the first time to launch his “Spread Kindness, #ShareTheLaughter” campaign, a year-long global multimedia project of Sesame Workshop, the nonprofit media and educational organization behind the children’s show Sesame Street.

Throughout the campaign, Elmo will ask friends to spread kindness around the world through the universal language of laughter with his #ShareTheLaughter tell-a-joke challenge.

“Sesame Workshop recently conducted a national survey that found parents and teachers are worried that children are living in an unkind world and that people don’t go out of their way to help others,” said Scott Chambers, senior vice president/general manager of North America Media and Licensing.

“The world could use a little more kindness,” Chambers said in a statement. “Elmo, and all of us at Sesame Street, have resolved to spread as much as we can through a fun, kid-friendly campaign that anyone can join.”

Kids will learn from Elmo various acts of kindness like giving, speaking in appropriate language, helping others, showing gratitude and being a friend to others.