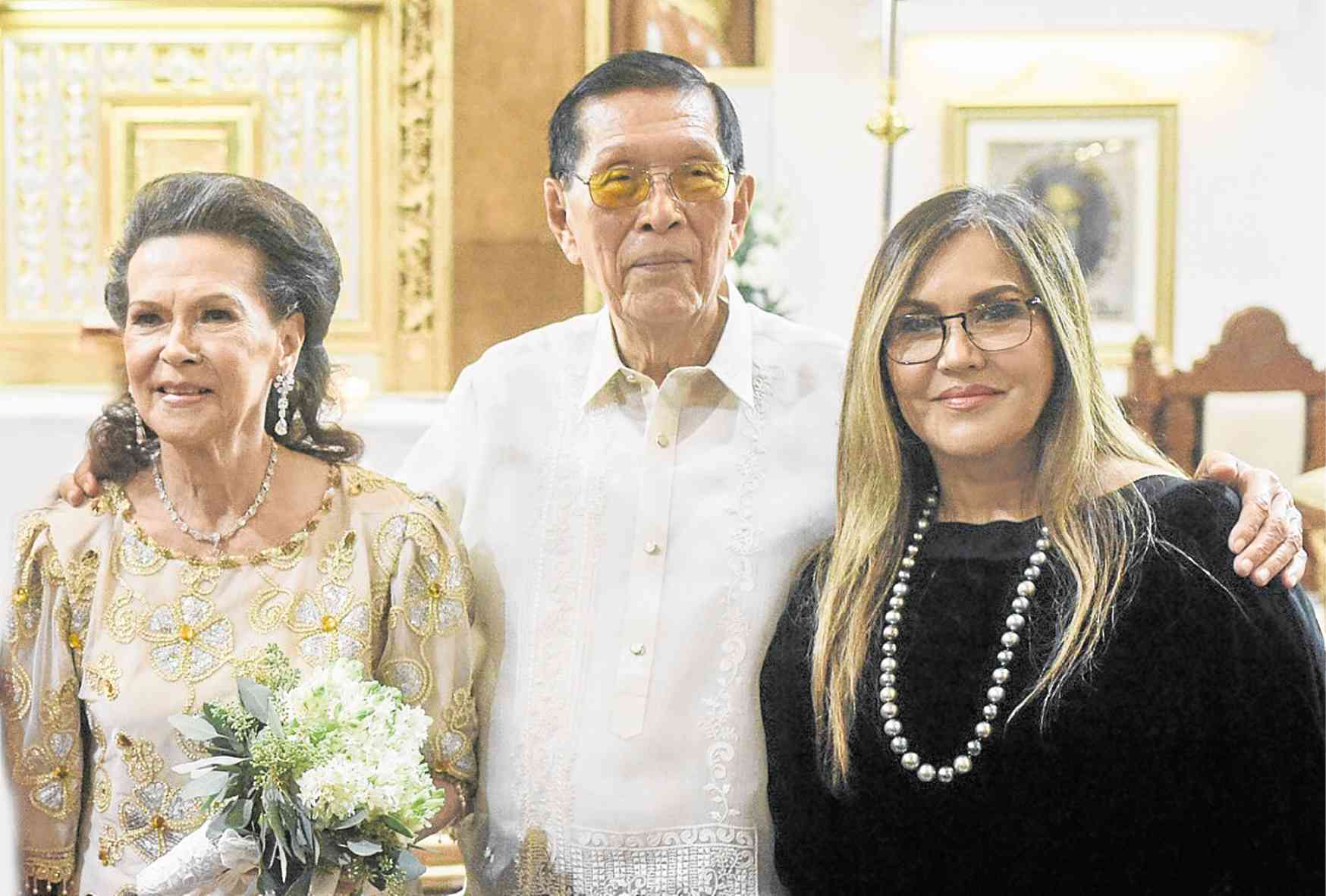 The couple with daughter Katrina who says she is “the happiest person” seeing her parents “still together after 60 years of marriage.” Mrs. Ponce Enrile is in a Pitoy Moreno. —CONTRIBUTED PHOTO

‘It’s not too late to make amends’–Cristina Ponce Enrile

Cristina Ponce Enrile was finally alone amid the revelry taking place at the Dasmariñas Village compound she has shared with husband, Senator Juan Ponce Enrile (JPE), for more than 40 years.

It was the night of their 60th wedding anniversary and the Spirit of ’67 was going full blast with retro-pop songs for the 200 or so guests who came to congratulate them.

Cristina, the country’s former ambassador to the Holy See, asked somebody to turn down the volume of the sound system. Obviously, the noise was not conducive to the ambush interview she wanted to accommodate.

“People nowadays are not very patient. That’s the right word. They want to have their cake and eat it, too. That cannot be, you have to give and take,” said the now frail-looking, 80-year-old mestiza. Her aloof exterior could be intimidating but every now and then, she would flash a mischievous smile.

Enrile, former Senate president and one-time martial law defense minister, openly confessed to certain failures with Cristina and their two children. In his memoir released in 2012, Enrile said he sacrificed family life for a legal career that evolved into half a century of government service.

“I regret that I did not spend more time with my wife and children. Cristina was left alone most of the time with Jack and Katrina. I barely noticed (them) grow up. I realized later in my life that I failed my wife as a husband and both my children as a father for not spending more time with them,” the contrite husband said.

“When I realized my mistake, it was too late for me to make amends,” he added.

Not so, Cristina believes. In her version, life with Johnny was “very good.” She said this several times that night, once in a round-table talk with lifestyle journalists invited to the couple’s diamond anniversary celebration.

“It’s not too late (to make amends) because after all, he’s still very healthy for his age, 93 and a half,” she noted. Cristina said Enrile “still can walk and… still do everything like he used to although not with the energy he had (then). Just like me, I think I can still have the energy I had 20 years ago.”

Enrile told reporters Cristina was initially cold during courtship. He surmised that her “religiosity” and prayerfulness may have had something to do with it. “Eh ako, hindi nagsisimba,” he said.

For Cristina, spirituality was a huge factor in keeping the marriage intact. This as her “pilyo” husband candidly alluded to himself as a ladies’ man, especially during their younger years, while at the round table.

“When you are a man, you pass through several rivers,” Enrile said at one point.

“Like all men, you go beyond the line,” he added later.

Cristina, seated a few chairs away, said they “never fought.” A newshen immediately challenged her statement so she took it back. “When he had a girlfriend, then I would hit him… with a fly swatter… sa puwit,” she with a pout.

“She would get irritated and I would keep quiet,” he stated feebly.

Women at the table jeered when Enrile noted “there was no texting, no cell phones then so (Cristina) cannot trace me.” He eventually raised his hands and exclaimed, “I was no Lucifer!”

“I took each day, one day at a time,” said Cristina.

Her happiest memory would be “that I had my children, most of all. And (eight) grandchildren… and (four) great-grandchildren.”

Enrile seconded this one. “Every day was a happy day,” he said.

The love story began in the mid-1950s. Enrile, a new member of The Bachelor’s Club, received an invite from friend Johnny Limjuco to a party in Grace Park, Caloocan.

“There were beautiful girls, one was Cristina,” he recalled. His memoir talked of an 18-year-old ingénue with dark hair “that flowed gracefully over her shoulders,” a face shaped almost like a heart, dark eyes, pronounced cheekbones, a sculpted nose and “two beautiful and shapely legs.”

Cristina did not pay attention, until about a year later when Enrile, fresh from higher learning at Harvard University, met her in another social event. His ice breaker? “Where have you been?” They married on Sept. 17, 1957.

Enrile’s book is peppered with references to Cristina’s considerate nature. She kept a low profile and was consistently supportive of his career. (At one point, she even gritted her teeth and became one of then First Lady Imelda Marcos’ Blue Ladies.)

“I’ve had challenges but I was able to outlive them,” Cristina told Lifestyle as the anniversary party rolled.

The wife said her firm grip on spirituality was instrumental in keeping the marriage going. “I think it comes from God. My strength comes from the Lord. I leave it all in the hands of the Lord. Every day that I wake up, every day before I go to sleep, I say, ‘Not my will but Thine be done.’”

It is this faith-based surrender that makes all the difference, she stressed.

“Many people do not understand that. Many people have the Lord in front of them but they don’t go out of their way to please the Lord. But you have to do that,” the erstwhile Holy See envoy said.

“You have to have your own dates with the Lord, moments in the day for God, and I have that. I do that every day,” she added.

Kibitzers quickly noted that the Gospel reading on their anniversary date, taken from the Book of Matthew, talks of forgiveness. Peter asked Jesus whether he should forgive his foes seven times and the Lord said not just seven but 77 times.

Did she find that relevant? “To have forgiveness in your heart is the best thing. You cannot always be angry. What’s the right word? You have to give and then you take. Then they give and (they) take. It’s a give-and-take world.”

When her husband was asked earlier about their marital problems, Enrile answered: “I don’t think there’s any family in this country where husband and wife had no quarrels. It’s a question of accommodating and understanding.

“At this point in my life, I do not talk about the past. It’s all about the future… We talk about life, we talk about how near is the end of life. At least that is something, we discuss it openly. My God, in this life you have mortality and it can happen anytime,” he added.

Katrina said triumphs and upheavals are normal in any marriage. “They fight, make up, fight, make up. They laugh but they always have dinner together. Always. As much (as possible) almost every day,” the daughter pointed out.

Cristina agrees. “We have dinner every day together. He has lunches with other people, that’s social obligation. I have lunch alone, sometimes with my pussycats. I have five Persian cats and five others I got outside the house. And two dogs.”

Katrina noted it was Dad’s idea to celebrate, although he admits he is “not very fond of parties… I’m not fond of celebrations, that’s probably something she will fault me with. I do not remember anniversaries.”

“We never celebrated our 50th because we know we will live to our 60th,” Enrile added.

Cristina said that after 60 years of marriage, she and Johnny have yet to run out of things to talk about. “We talk about everything. What happened today, what will happen tomorrow, the problems of our children, the problems of (our company) JaKa…” she trailed off.

That night, Cristina sported a parure of diamond-studded earrings and a necklace—obviously a gift from her husband. But more than the expensive gifts he gives his wife, Enrile said he is prouder of the flowers she regularly receives from him.

“I am not fond of writing love letters. I express myself to my wife. I say, ‘I love you,’ I kiss her. I kiss her good night. I always send her roses. Yellow roses, not because I am yellow. Red roses, pink roses, white roses, Ramon Roces,” said Enrile.

The patriarch shrugged his shoulders and laughed at his own joke.