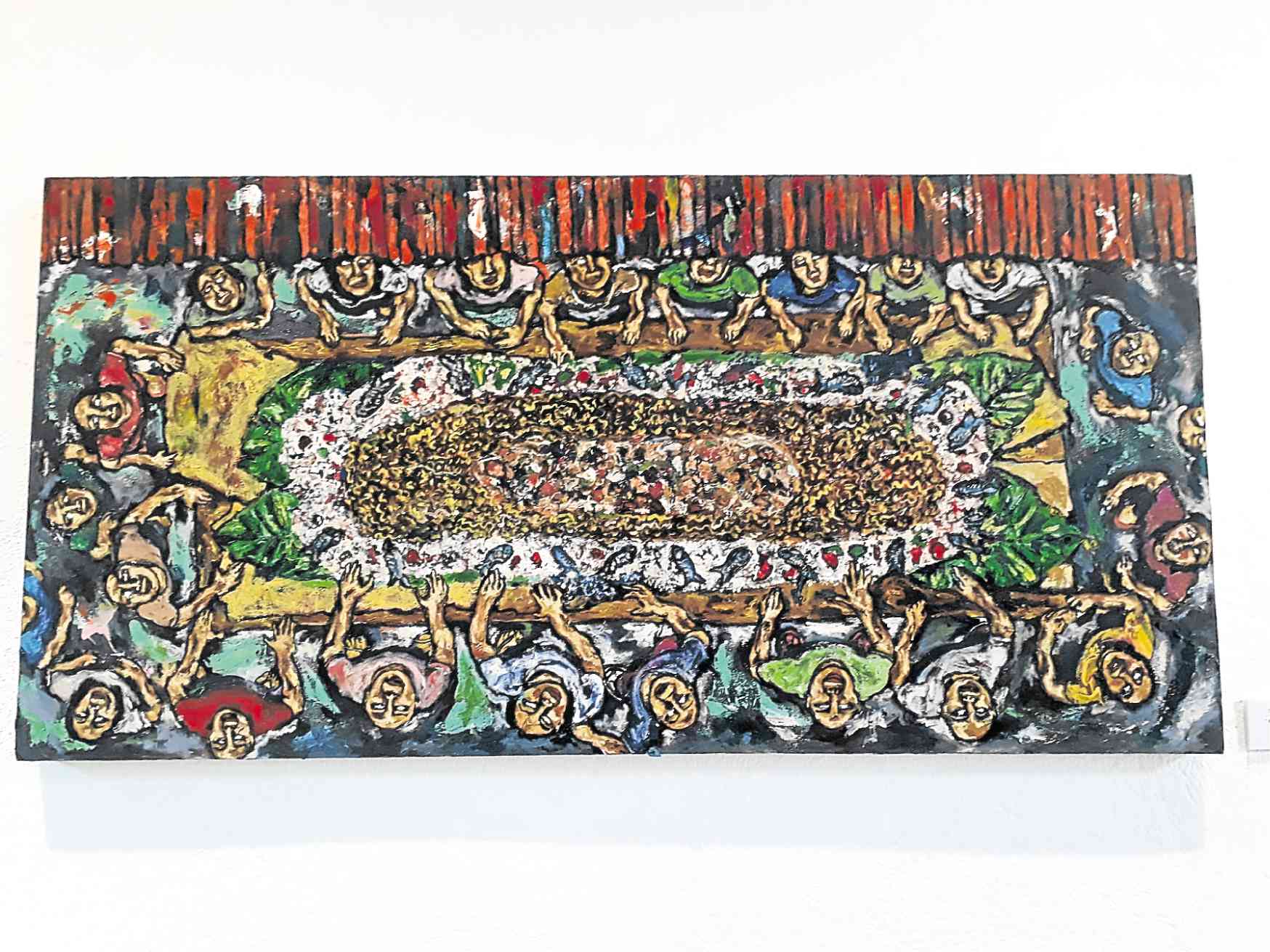 ‘Bubóng’–Coquilla’s view from the top

The “Bubóng” exhibit at Pintô Art Museum is no coincidence. Daniel “Dansoy” Coquilla wanted his top view paintings of Filipino pop culture to serve as a counterpoint to the gallery’s door. His bubóng to museum owner Joven Cuanang’s pinto.

After all, this artist’s 25th solo exhibit is his first at the medical doctor and art patron’s gallery-cum-nature park on the Antipolo hills.

Coquilla depicts characters looking upward for answers to their queries, like how to survive in a cruel world while he was an Iskolar ng Bayan at UP Diliman or his father’s death as a victim of summary execution.

A school dropout from Panabo, Davao del Norte, Coquilla migrated to Manila in 1988 at age 18 to follow his dream to become a comics illustrator.

He joined a comics-illustration workshop conducted by Vincent Kua Jr., then a popular comics author. Kua was a protégé of Hal Santiago, a great Filipino illustrator. At the workshop, he met Fred Liongoren, a famous visual artist who wanted to be a comics illustrator.

With nowhere to stay, Coquilla was taken by Liongoren as his assistant at Liongoren Gallery. There, Coquilla slept and woke up with Dalena, Belleza, Olmedo, Ang Kiukok, Austria and Liongoren paintings in the stockroom. It was an inspiring exposure to Filipino artistic greats, free of charge.

It changed Coquilla’s outlook. It led him, as he says, to the University of the Philippines College of Fine Arts where the late Maningning Miclat, Aba Lluch Dalena and Kelly Ramos “became my blockmates.”

It was a hard life for Coquilla at UP Diliman. He had his daily meals at Mang Larry’s Isawan, which sold cheap barbecued chicken intestines. The experience became the subject of his art.

In his class with professor Roberto Chabet, they were required to submit 100 studies for a painting. He drew “Mamang Isaw.”

Art critics took notice of his paintings inspired by figurative expressionism combined with comics storytelling. He won the Grand Prize in the Art Association of the Philippines annual painting competition in 1996.

The following year, he won the Jurors’ Choice in the 4th Philip Morris Asean Art Awards, and the UP Gawad Chanselor para sa Sining Biswal.

Coquilla became one of five Philippine representatives to the Windsor and Newton Worldwide Millennium Painting Competition in 1999, and a 13 Artists awardee of the Cultural Center of the Philippines in 2006.

A painting he calls his Mona Lisa is “KH.” It depicts a wake along a side street near the Kamias-to-Cubao bridge, used by a syndicate as gambling front that fleeces on commuters. The painting, which won the Philip Morris in the Art Awards, is now in the Singapore Art Museum collection.

“Salamanka” is his take on the latest controversy about Ferdinand Cacnio’s UPLift sculpture fronting the UP Diliman main theater.

A group of Coquilla’s artworks is mounted on a piece of old galvanized-iron roofing.

Author heads the Maningning Miclat Art Foundation, which is holding its 2017 Maningning Trilingual Poetry Awards and Concert on Sept. 28 at UP Abelardo Hall. E-mail [email protected]