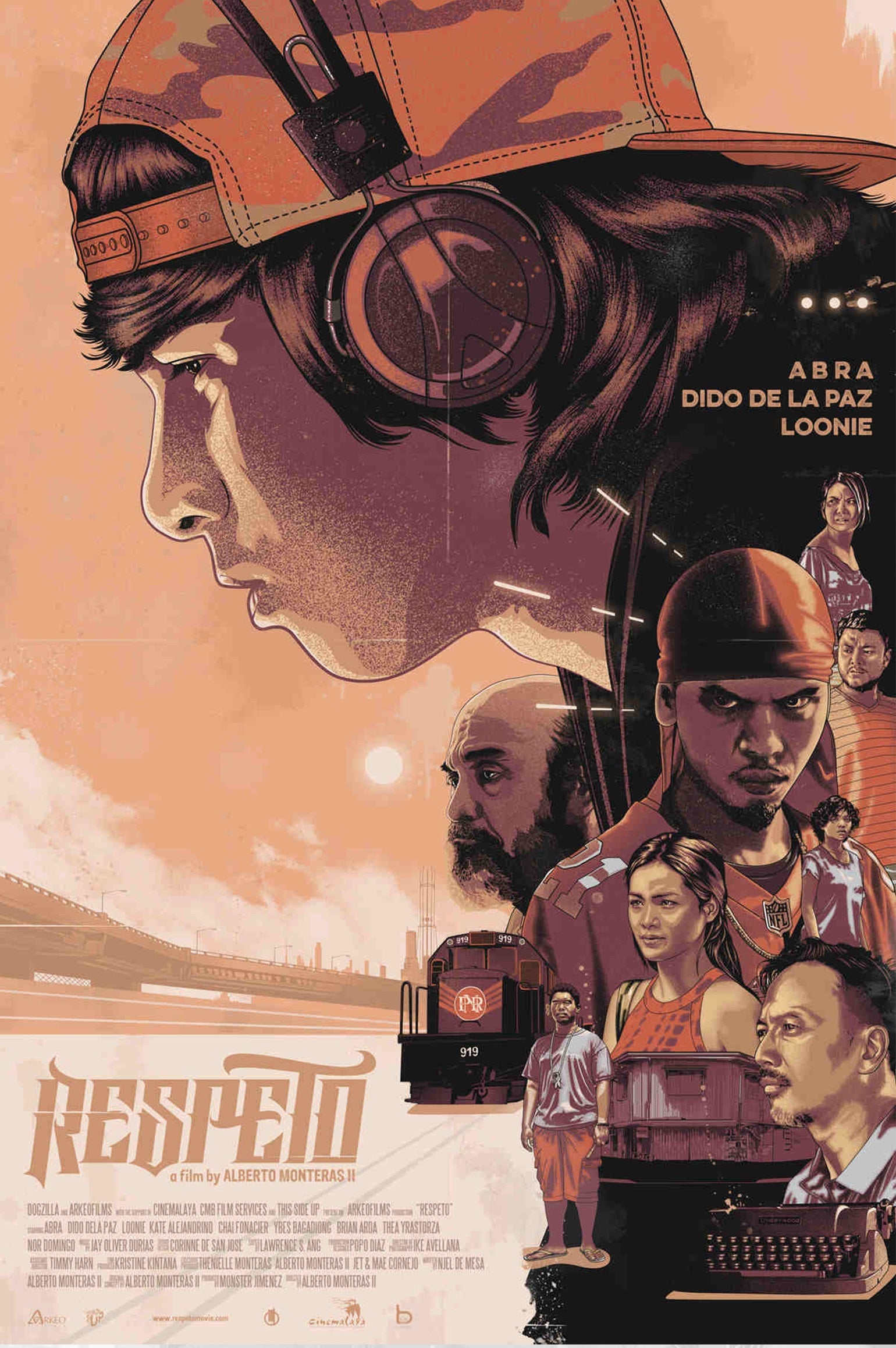 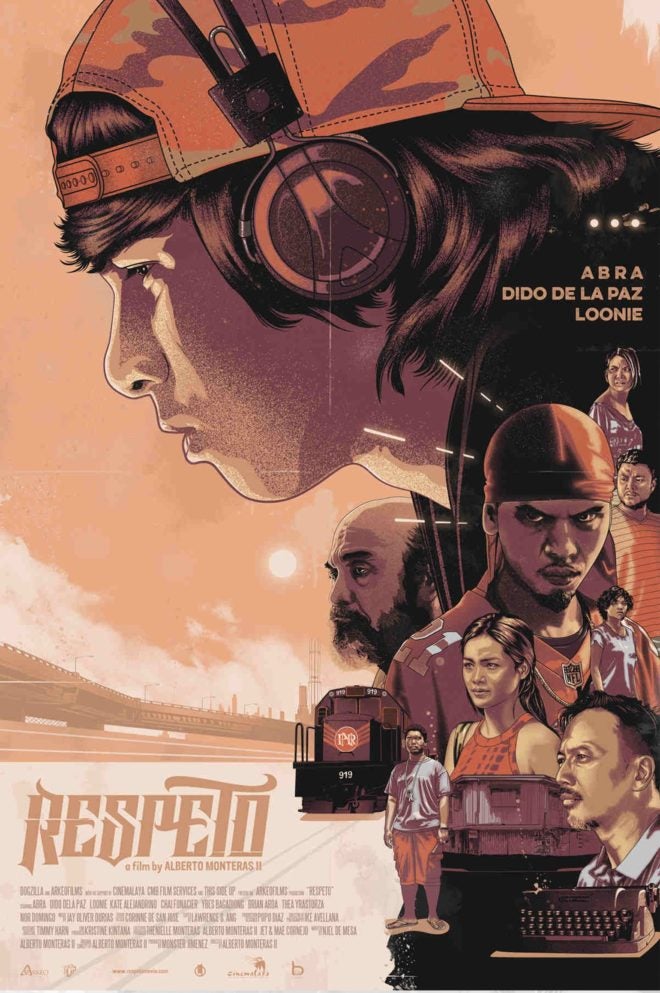 Trolls aside, it will be difficult to find ways to criticize 2017 Cinemalaya Best Picture  “Respeto” (Arkeofilms, Dogzilla Films). That little token alone flags the film as one worthy of more than just run-of-the-mill discussion, and in that regard, more exposure. Right now it is riding the wave of its Cinemalaya exploits with a commercial release and talks for other rights ongoing. Viewers are raving about it as the great commentary of the day with its unflinching portrayal of a dark and dank micro-society within a much larger, much more broken system.

That said, it is certainly not a film that attempts to throw any grand theme at the audience, or blast them with special effects. In fact, there is little frill to gawk awfully at or nitpick. The setting is dreary and dry, almost lifeless, with director Alberto “Treb” Monteras II driving the point home with extensive shots of shanties by the tracks, mucky canals, and cemetery niches, of course.

Against this backdrop, the  main character desires to conquer the local underground rap scene. Hendrix (rapper Raymond Abracosa, better known as Abra) wants something else other than his everyday world, not quite to be out of it, but to be integrated with it and given the titular respect like other local rap heroes. But his home and surroundings are a bog, pulling him further down with each effort to get up and out. The movie’s plot pounds you with provoking events in the story of the problematic kid with the heart of gold. It’s depressing. It’s maddening.

To see why “Respeto” succeeds, one must look away from Hendrix and at the wider perspective, and really appreciate where he is coming from – the slums, occupied by informal settlers and all the excrement (literally) that sometimes comes with dealing with them. This is hardly the street corners and alleys darkened by city tall structures of brick and stone stereotypically associated with purveyors of the musical genre, but this is not the West; Hendrix is in Pandacan, in the City of Manila, the long-faded Paris of the East. There is rubble and rubbish where structure used to or should be; there are wire-strung cardboard and GI sheets in place of housing complexes.

But it does not take much. It could even be said that you do not have to. Without us knowing it, Monteras makes us step back further still, where we realize what seems to be a blur between what we are seeing on the screen and what is happening in our world. The movements against slum-dwellers, the actions of the police, the news blaring out of Doc’s (Dido de la Paz) radio – we know them. They are real. These elements are coming from our side of the silver, crossing it to take part in “Respeto’s” microcosmic tableau.

Right in our midst

Monteras does not pull us into his narrative, he sets it right in our midst. To us, therefore, Hendrix and company are all moving in the same world we are in, so when they get into trouble with rap gangs, witness drugs being distributed if they do not do the running themselves, and on that note when they encounter tokhang, our hearts race because we feel their apprehension, their terrible anxiety. And when these so-called movie characters cry injustice to the heavens, we let loose as well, sharing in their brokenness. Throw in Doc’s debilitating trauma from the Marcos-era martial law and the picture is complete. Monteras has successfully sewn the narrative into into our lives. The great commentary of the day.

Story-wise, the narrative is tightly wound around Hendrix. His and his friends’ movements glue viewers to the screen, thanks likewise to great close-shot cinematography. The mood is driven by their foreboding, unease and uncertainty, punctuated with narration brilliantly put in poetic rap verse. The background mirroring what is happening in society today is just that, a background that provides the panoramic view as contrasted to Hendrix’s profile.

Yet we do not lose sight of the milieu, because it is real. There lies the genius of “Respeto.” Rather than making a direct comment, Monteras did the next best thing, which, as discussed earlier, is to bring the story into our midst. Otherwise stated, when the filmmakers planned, shot, revised, cut and edited the film for the better part of the last decade, they left the proverbial fourth wall in the movie-making closet.

It helps a lot that the performances by the cast are spot-on. Abra as the drug-running, verse-juggling Hendrix shifts from brooding to jocose with ease, so much that he reminds you of some random neighborhood street rat. And Doc, the old guy who runs the neighborhood store (book store, in this case) that every urchin ends up befriending, is well-essayed by veteran Dido de la Paz. The casting of Cebuana actress and singer-songwriter Chai Fonacier and newcomer Silvester Bagadiong perfectly rounds up this slum gang of settlers and stowaways, or their spawn.

You would think, watching the movie, that there should be redemption somewhere in all this. These are essentially good people who certainly will find a way to beat the odds by being together. That’s what usually happens when benevolence comes together and people work with each other.

Instead, Hendrix is pulled down by the bog of drugs and violence, and at last we end up asking the question, “what now?”  Pages rain on the main characters to show that words – rap, poetry, or whatever, can only go so far. What matters is what is done. What are they going to do now? For most of the film, we know that Hendrix does not know, given his vicious cycle of ambition and perdition. We get that Doc once knew and lived the ideas of his generation, but after everything that has happened to him, he has effectively given up. He does not know what else to do, too. We are teased into thinking that Hendrix’s slow education about the past – historical and poetic, will arm him with ideas and show him the way out. Then nothing.

It reminds one of 2002’s “Cidade de Deus” (“City of God”), the Brazilian movie that garnered nominations for directing, screenplay and cinematography at the Oscars, adopted from the 1997 novel by Paulo Lins but loosely based on real events, also about slum kids running from knife- and gun-wielding gangs out to maim or kill each other in the criminal and deadly favela they were born and lived in. In the middle was the aspiring photojournalist Rocket (Alexandre Rodrigues), who wanted nothing more than to capture stories as they visually unfold. He, too, did not seem to be able to get out of the maws of poverty and violence despite his ideas and hopeful spirit, too entangled as he was in the world of his brother, a gang leader. Like Hendrix’s story, the pictures he takes leave one wondering whatever happened next to the people in the photographs, frozen as they are in chemical on paper.

“Respeto,” in its rootedness to reality, does not have a clear-cut answer as well. Hendrix never recovers from his rap battle humiliations. Doc’s words do not become the dogmatic formula that we expect would shed light on the darkness of the present and enlighten rappers as regards their shallow poetry, limited only to dissing each other on the battle floor. There is no teary victory in the end, where against all odds the reject is seen for what he is – the hero who wipes the slate clean and makes a new beginning for everyone.

What now, indeed? It’s a question that moviegoers living in the same society that Hendrix is in must be and are asked, as we continue to see other Hendrixes and Docs in a vicious cycle of pain and defeat. In the end, Monteras gives us no answer because there still isn’t any.

Unless, of course, we supply it.