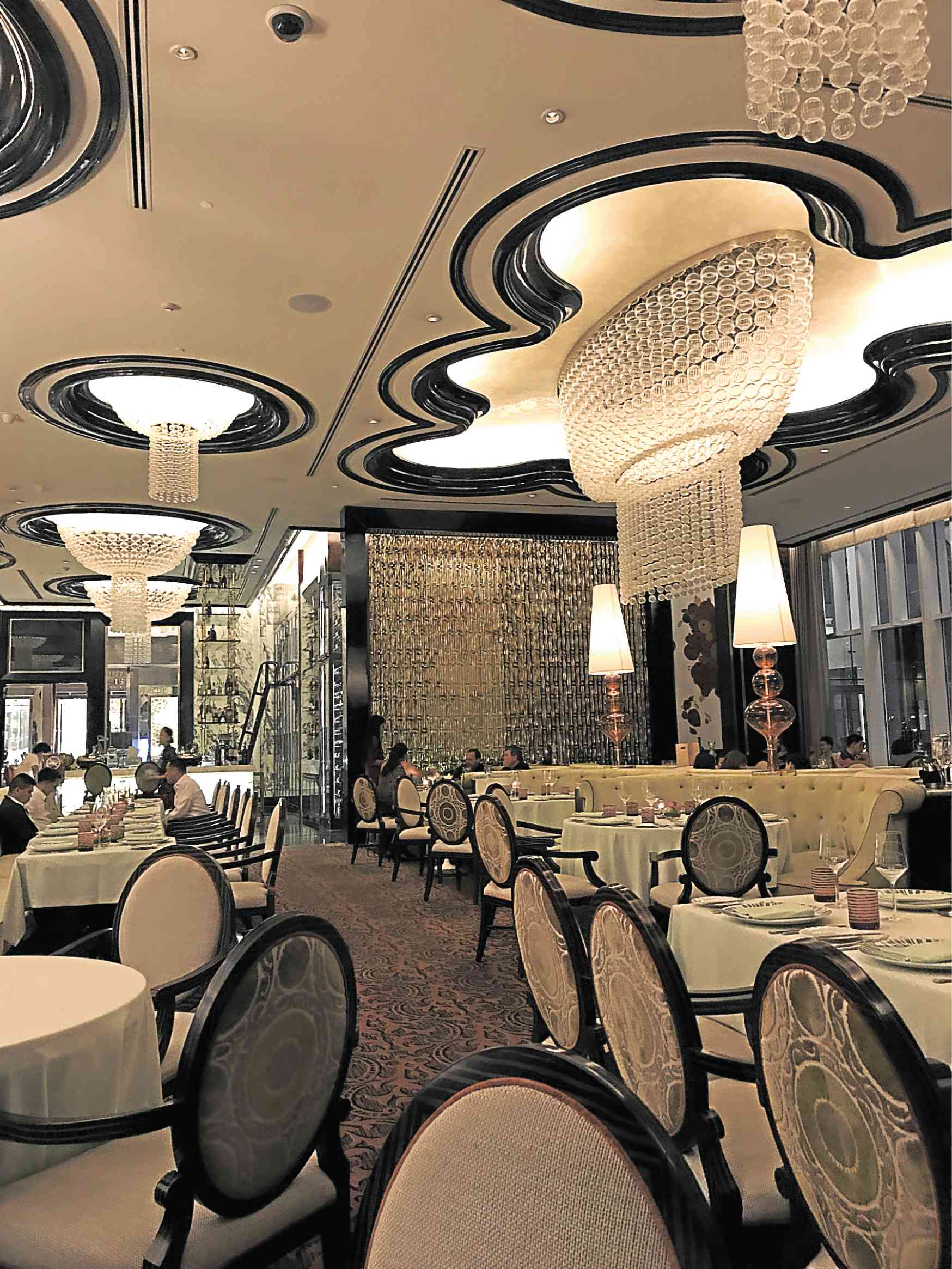 Casinos–where to go for unabashed luxury dining these days

Last Tuesday, 52 restaurants in Manila received couples or groups of friends riding in BMWs sent to pick them up and take them to dinner, courtesy of Town and Country.

My wife and I had drawn the straw to go to Finestra at Solaire Resort and Casino. We spent the first hour and a half of the evening listening peevishly to the BMW’s navigational system beep whenever someone got too close to the car, which was nearly all the time in the Makati central business district traffic.

Then, suddenly, we were out on the airport highway extension, and the car was doing what it was supposed to do, engine purring as it wove past Resorts World Manila, City of Dreams Manila, and finally screeching to a halt by Solaire.

For someone who doesn’t gamble, I had spent a lot of time this week inside casinos, or at least casino complexes. Earlier in the week I had dropped by Resorts World to visit my old friend Cyrille Soenen for a photo shoot. When I first met him in 1997, he was working as head chef at the InterContinental Hotel on Ayala Avenue, which has recently joined its sibling, the Mandarin Oriental, across the rainbow bridge in the farm where all good hotels go after their passing.

Casinos are really odd places. Because I’ve never had any money to gamble, the whole exercise has never made sense to me. The idea that you might somehow walk out of the place with more cash than what you had when you entered in seems completely ridiculous.

But I’ve always liked the feel of a casino—the sleaze, the stakes, the frenetic nature of those who are in the fever of a winning streak.

The disorienting, maze-like construction of a casino, the lack of windows, the lack of clocks or any reminders of the outside world; the idea that you can invent your own hours and decide that it’s morning, noon or night; that it’s time to have breakfast or lunch or dinner—such things have always been fascinating to me as like veering on this side of lunacy.

Casino dining outlets often have to cater to guests who are reluctant to leave the gaming tables and have to be brought steaks cut up into tiny bits so that they can continue to play while eating. The high rollers blowing their winnings, plus the constant revenue stream from the gaming side, allow chefs to indulge in something that is increasingly out of place in the mainstream dining world: unabashed luxury.

Dining out in Manila has changed considerably since the days when Cyrille and I were organizing special dinners at the Romulo room of the Prince Albert rotisserie. Who would have thought then, for instance, that there could be 52 fine-dining restaurants to choose from one day, instead of the dozen or so from years back?

But part of the drift has been away from straight-up luxury and the trappings of Baccarat crystal and Limoges porcelain and Christofle cutlery to a more casual vibe, even as the food offerings became more cosmopolitan and less French.

The food outlets at the casinos have been largely immune from the sustainable-organic-local movements which are the buzzwords that drive the industry now. Don’t get me wrong—these are my causes, too, and I’ll defend them to the death.

But sometimes the marketing teams go on overdrive and chefs throw themselves into the movement with much zeal, so that going to an old-fashioned restaurant that imports everything and whose menu is completely trend-free feels like going back in time.

I miss grand interiors and the sweep of high ceilings, chandeliers, soft lighting and carpeting underneath. These, and more, abound at Finestra. The “new” restaurant has only been open for about a month. From what I understand, there used to be a straight-up steakhouse, and Finestra was just about Italian dining. They closed the steakhouse, moved the Josper oven into the Italian restaurant, revamped the menu, and reopened as the Finestra Italian Steakhouse.

Since I’d never been to either place in the past, I took it at face value and felt that it worked. The feel is that of a grand old brasserie, with a bit of Cipriani’s at Grand Central Station. The menu is old-world Italian with an emphasis on steaks. There’s no bistecca fiorentina, but this is more than made up for by the choices on offer: USDA Omaha Angus beef, Snake River wagyu beef (also from the US), and Australian Blackmore wagyu beef—the latter starts at P10,500 for the striploin and goes up to P12,000 for the rib-eye.

These are the sort of crazy items you can have on the menu at a casino restaurant. But it means it’s also available for the nongambler should one choose to have it.

We didn’t have that, incidentally, the restaurant chose the Snake River wagyu tenderloin for us, and it was so soft and juicy that it was difficult to fathom how much better something twice the price would be.

This was served as part of a multicourse meal that ended with the magical sweet box of pralines, truffles, ganaches and other goodies that popped out of drawers from all sides.

There were wines aplenty. My wife, who is usually in charge of sampling the alcohol, was on antibiotics, so I wish I could be more eloquent than saying that it was plentiful and good.

Solaire has made a miraculous turnaround just last year from being in the red to posting a profit of P2.3 billion in 2016. Casino owners, not just their patrons, have to gamble and cross their fingers that their investments pay off.

Like getting a tattoo, I take a benign view of them—they’re not for me, but I have no objection to them per se.

They bring jobs, both directly and in the gray economy surrounding the casinos, and they allow the flourishing of a high-end dining scene that would otherwise not be available.

But, as with tattoos, I think there’s a reasonable limit to them before it gets weird. A bit of moderation is in order. —CONTRIBUTED