Do your kids know the value of money? | Inquirer Lifestyle ❮ ❯ 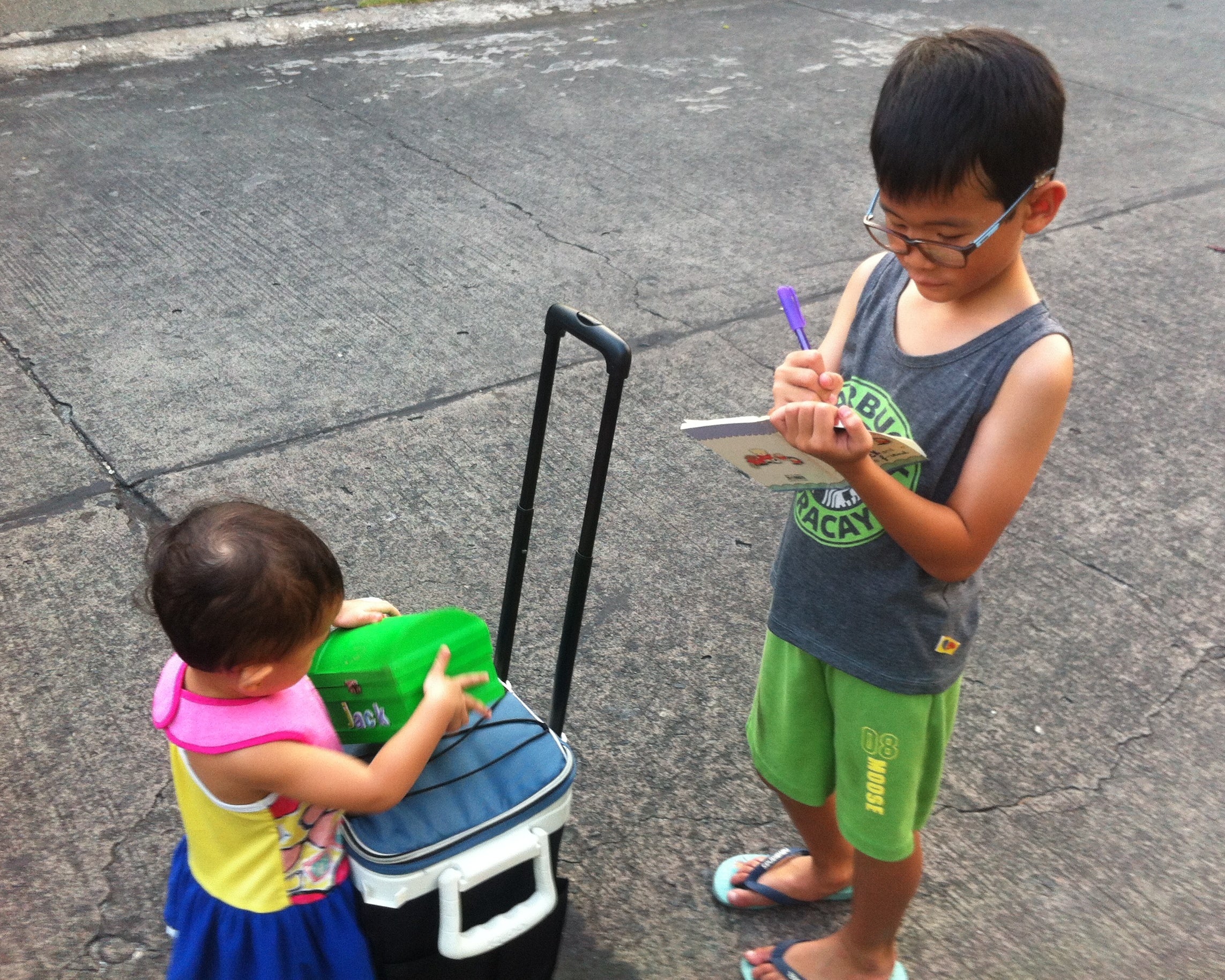 Juno and Jack updating sales and inventory of Jack’s product

Do your kids know the value of money?

Last summer, my six-year-old son Jack said he wanted to buy a plane so we wouldn’t have to buy tickets for trips. As amusing as it sounded, the seed was planted—and so we decided to raise the money by selling ice candies to neighbors.

We went for a high-quality line to stand out from the competition, justify premium pricing, and have genuine pride in our product.

Jack screamed himself hoarse and got exhausted walking all over the village, lugging around our old trolley cooler. He learned to do mental math and inventory and determine which flavors were in demand.

He became more confident in his sales pitch and learned how to talk to all kinds of people. He also learned that not everyone would be interested in his product and to just let rejection slide and try again the next day.

The support of his loved ones (lolo, lola, ninong, ninang, etc.) boosted his sales, but I let him go through the arduous process of door-to-door selling for the training.

His two-year-old sister Juno also got a kick out of yelling her heart out, “Ice candy for sale!” to help Kuya, and we all got to walk outdoors and spend time with each other.

Though, in the end, Jack couldn’t meet his goal, it gave him an idea on how much work it would take for such a project. The cheapest, according to Google, was P2.5 million for a single-engine airplane. I was glad the drop in the bucket we raised didn’t dissuade him. He said, “We’ll just have to sell more next summer!”

It was also important to teach Jack how to set aside some of his earnings into savings, investment (back into ingredients), sharing (with the less fortunate), and personal spending. Curiously, he refused to spend any of his earnings on himself and instead wanted to save more to get closer to our target.

As a work-at-home mom, I try to teach my two kids, for instance, that ordering a P215 fruit shake at a restaurant may not be a good idea because we could make our own fruit shake at home. Or how a scoop of fancy gelato costs as much as three hot fudge sundaes at a fast-food chain.

I got my first credit card when I got married in my early 30s because my husband insisted on it. I really didn’t like the idea of paying for things I couldn’t afford and being in debt.

From business school, I knew that debt was cheaper, but in practice I lived as frugally as I could and lived below my means because I was always insecure about the future.

I was aware of how short my earning power period would be till I’d be too old to work. I continued purchasing true assets that can produce more revenue.

I also felt responsible to impart some financial knowledge to our helpers regarding their money. Opening bank accounts for them wasn’t easy because I had to vouch for them, but getting them to willingly set aside funds for themselves, no matter how small, was a feat in itself.

Teaching them that saving money is good, but beating inflation is better by finding a way to grow their money through a small microbusiness was a mind-set they had to get used to, in a culture of bottomless handouts to relatives. Genuine compassion, benefits and continuous education are also part of our household’s “retention plan.”

As we say our morning and nighttime prayers, I help my kids enumerate all the people and things that we are grateful for, instead of fueling desires for more stuff we do not really need.

With this regular, deliberate mind-setting, it is my hope that we can sustain a lifestyle of simplicity and contentment, balanced with an unflagging work ethic and determination to go for the seemingly impossible.

Who knows, perhaps one day, we will finally get a ride on Captain Jack’s plane.