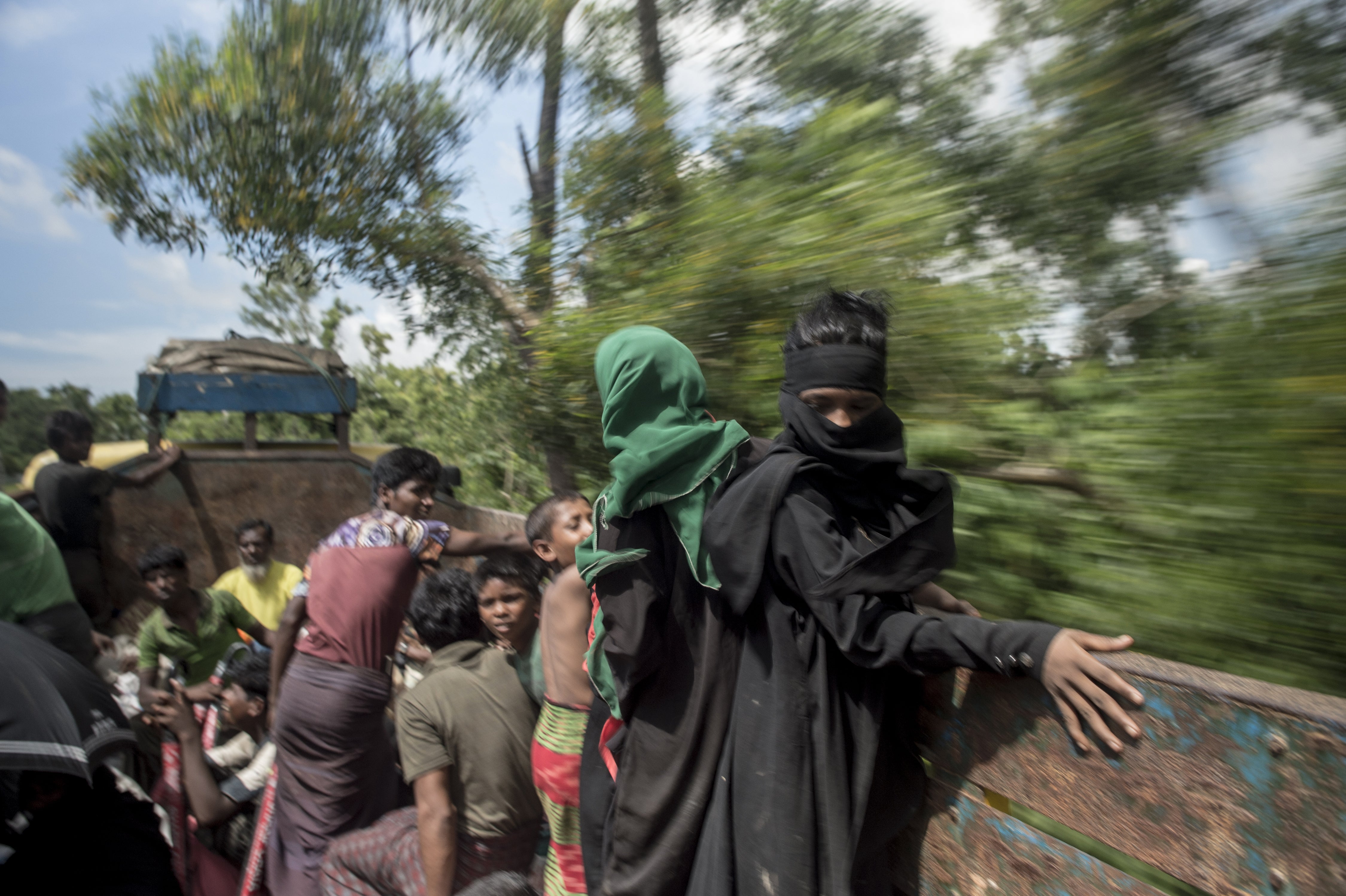 Rohingya Muslim refugees ride on the back of a truck which head towards Nayapara refugee camp after crossing the border from Myanmar, in Teknaf on October 3, 2017. The United Nations has said it would seek $430 million to increase operations in the camps along the Bangladesh-Myanmar border. The Rohingya Muslims have poured across the frontier to escape a military crackdown in Buddhist-majority Myanmar. / AFP PHOTO / FRED DUFOUR

A Myanmar beauty queen says she was stripped of her pageant title after posting a graphic video accusing Muslim Rohingya militants of driving communal violence in Rakhine state, a conflict fraught with controversy in the mainly Buddhist country.

Myanmar’s army is accused of waging an ethnic cleansing campaign against the Rohingya in the far west, where more than half a million of the Muslim minority have fled across the border to Bangladesh since August 25.

In the face of intense global condemnation, Myanmar authorities have staunchly defended the security operation as a legitimate crackdown on Rohingya militants who attacked police posts last month.

The conflict has curdled religious tensions inside Myanmar, fanning Buddhist nationalism and a hatred against the Rohingya that has been steeping for years.

In a video posted on her Facebook last week, Miss Grand Myanmar Shwe Eain Si accused the Rohingya militants of leading a “media campaign” to trick the world into thinking “they are the oppressed”.

Shots of Shwe Eain Si speaking to the camera were interspersed with graphic images of people with bloody gashes across their faces, nude babies and screenshots from videos posted by the militant group, known as ARSA (Arakan Rohingya Salvation Army).

On Sunday the firm behind the beauty pageant announced Shwe Eain Si had been stripped of her title for breaching contract rules, in a statement that did not mention the video on Rakhine.

But in a reply posted on Facebook Tuesday Shwe Eain Si said these accusations were “groundless” and linked the move to her comments on the Rohingya.

One of the company’s complaints, the beauty queen wrote, was that she “failed to project a decent image of a pageant contestant”.

“Yes, Shwe Eain Si made a video about the reign of terror brought about by the ARSA militants in Rakhine State, but that was hardly qualified as a failure to project a decent image of a pageant contestant,” her post said.

Miss Universe Myanmar was not immediately available for comment.

It is not the first time Myanmar’s nascent beauty queen scene has been rocked by drama.

Earlier this year a prominent transgender pageant winner was detained after a famous actress sued her for defamation over insults posted on a popular celebrity gossip page.

And in 2014 a Myanmar beauty queen was dethroned for alleged dishonesty and bad behaviour, after which she ran off with her crown to South Korea.