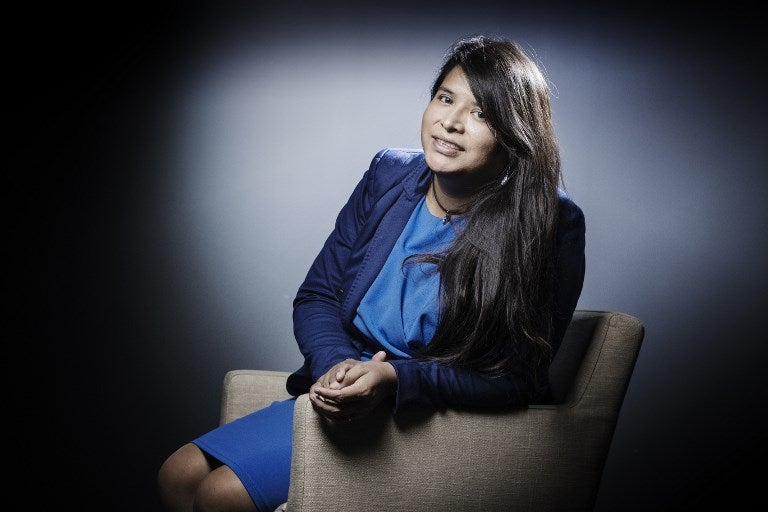 Clemence Zamora-Cruz, spokesperson for the association Inter-LGBT, poses during a portrait session in Paris on October 4, 2017. Clemence Zamora-Cruz was just six years old when she realised she wanted to change her gender. It was the start of a journey she said was full of pain. / AFP PHOTO / JOEL SAGET

Clemence Zamora-Cruz was just six years old when she realized she wanted to change her gender.

It was the start of a journey she said was full of pain.

“I was immediately punished,” said Zamora-Cruz, who was born a boy but came out as transgender as a child.

“When you’re identified as a boy but you feel you’re a girl, people seek to normalize you.”

Zamora-Cruz, who was born in Mexico, said she endured spitting, hair pulling and beatings: “For me, this normalization was done through violence.”

She fled to France aged 20, after years of suffering and months of living on the street.

While studying, some professors refused to acknowledge her chosen gender identity and she was once fined for “fraud” when her papers still listed her gender as male.

“The transition never stops,” the long-haired brunette said. “It is the experience of a lifetime.”

A transgender person who is transitioning is shifting into their new gender identity by changing their “physical and sexual characteristics from those associated with their sex at birth,” explains the National Lesbian and Gay Journalists Association in the US.

It can be a complex process that might include surgery and body modification, but not always.

For Zamora-Cruz, now 42 and married, it also meant facing invasive questions about her transition, which she equates to “harassment”.

After years of fighting by the LGBT community, France in October 2016 made it easier for trans people to legally change their gender.

While the official figure of trans people in France is 30,000, activists say there are tens of thousands more.

For Christelle, who does not want her last name to be published, it would take 34 years and three suicide attempts to start her journey to transitioning.

“I knew since I was very little,” the French woman said, “but I had to find the courage to talk about it.”

After she came out her wife left and her son stopped talking to her.

Later came the “torture” of surgery.

Electrolysis, a procedure to remove individual hairs from the face for example, made her feel like she was experiencing “thousands of bites” at every session.

In Thailand, her male-to-female gender reassignment surgery to remove her male genitals and create a female anatomy left her in tears daily.

“But I had to go through it in order for me to have a normal personal life,” she said.

Christelle, 45, continues to work in the military after her transition and is now happily married to a soldier.

Together they had a child through assisted reproductive technology.

“If I had not gone through a transition, I wouldn’t be here,” Christelle said. “That’s a given.”

Thierry Gallarda, a psychiatrist who specialises in transgender issues, said for many transgender people, the choice to transition is the only viable one.

“If there is one common point in all of these trajectories is the idea of inevitability,” Gallarda said.

“For all of my trans patients, there is no other choice”.

While it brings joy, for certain body types the change can be more difficult.

It is much easier for some transgender people to go through a female-to-male conversion than it is the other way around, endocrinologist Catherine Bremont said.

Testosterone, the hormone given to trans men, for example has a very rapid effect on the hair and voice, making it deeper.

“But for a woman, there will be required standards”.

It is also easier to transition if you are young and healthy and you are able to afford the required operations.

According to sociologist Arnaud Alessandrin, less than half of trans people go through gender reassignment surgery.

But in their search to discover who they are, they are all likely to suffer discrimination.