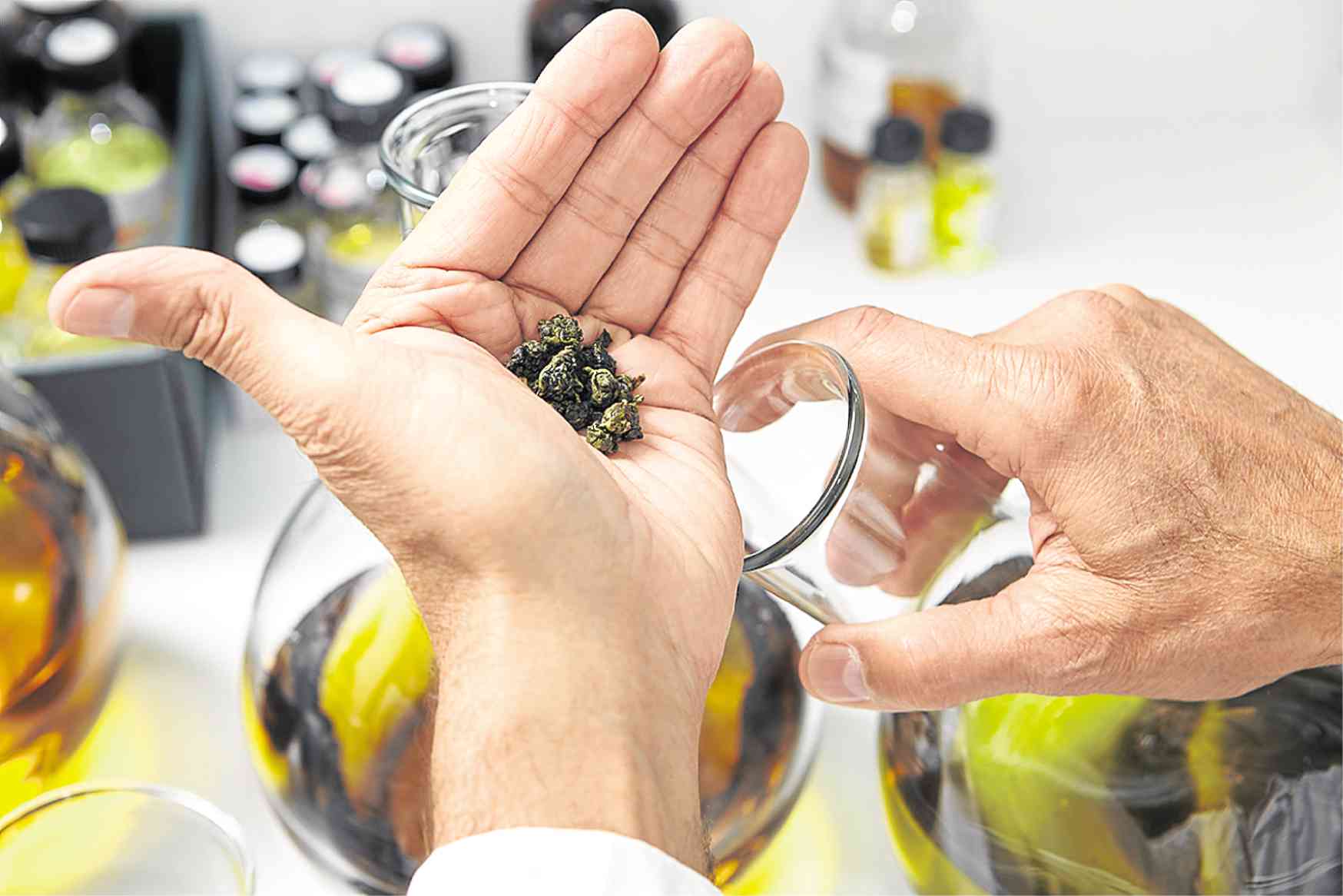 Jo Malone bottles rare teas–not for drinking, but for wearing

One of the oldest beverages in the world, its rarest kinds often rivaling the price of gold, rare teas have been bottled by the English perfumer to come up with six refined fragrances that would please even the most discriminating emperor or maharajah who knows his tea.

Jo Malone’s Rare Teas Collection makes up the brand’s top-of-the-line fragrances, infusing the rarest types found in Fujian and Yunnan in China to Kyushu in Japan and the foothills of the Himalayas.

Tea comes from the camellia sinensis plant, and from these are six types: white tea, yellow tea, green tea, oolong, black and puehr. The processing of the harvested leaves is what makes them different from one another, said Sheryl Ebon, tea sommelier, at the launch of Jo Malone Rare Teas here.

“Naming is based on the color of the liquor,” she said. “White tea is heat-dried [so it keeps its pale color]. Black is actually red in China (gong cha). It was the British who gave it the name, since the English sailors who traded in the ports of Canton unwittingly left the leaves to steep too long and the tea turned black and bitter. That’s why they put milk to alleviate the bitter taste.”

In China alone, there are 22,000 variants of tea, and the best teas usually don’t leave the country, Ebon added. A rare type of oolong can fetch up to $10,000 per 15 grams. “It may seem like a lowly leaf, but remember that tea caused two Opium Wars. It’s 5,000 years old, even older than Christ.”

At Jo Malone, master perfumer Serge Majoullier and fragrance director Celine Roux infused six rare teas to bring out their extraordinary facets and characters to come up with a unique collection of fragrances.

Silver Needle Tea or yinzhen in Chinese is a delicate white tea that used to be reserved only for the imperial household. It’s harvested once a year in Fujian. With its floral facet, Majoullier was reminded of “morning dew on white rose petals.” It’s blended with rose absolute, mimosa, bergamot and sage.

The herbaceous Jade Tea Leaf is inspired by Japanese sencha—with the bitter notes of pomelo, sesame and mate leaf. The fragrance was inspired by sencha ariake, the “smoothest of all fine Japanese sencha teas,” according to Majoullier. “This fragrance is a crisp, green, slightly bitter, interpretation of tea.”

Like the beverage that requires varying temperatures and steeping times, infusion time for the teas in the Jo Malone collection also differed to preserve the qualities the perfumers wanted to highlight: 10 hours for the Silver Needle Tea, 22 hours for the Jade Tea Leaf, etc.

The exotically sweet and floral Darjeeling is found in the foothills of the Himalayas. Majoullier infused the leaves for 45 hours to coax out its white floral quality. It’s blended with jasmine absolute, freesia and the Indian herb davana, for a velvety floral-fruity scent.

Oolong Tea from Fujian was infused for 68 hours to bring out its woody and spicy charm. It’s mixed with cocoa, tonka, hay and tobacco, for an earthy sophisticated scent.

Golden Needle Tea is inspired by a drink that comes from 200 BC China. The fragrance is woody and spicy with leathery notes. This dark tea, infused for 92 hours, mingles with benzoin, sandalwood, leather and styrax. The fragrance was inspired by Chinese teahouses—dark and mysterious, according to the perfumer.

Puehr or fermented tea inspired Midnight Black Tea. This precious tea traces its roots to Tang Dynasty, when it was compressed into portable bricks for traders. The journey gave the tea time to mature and develop its flavors.

At Jo Malone, it was infused for 100 hours to bring out its sensual personality. It was blended with vanilla, amber, guaiac wood and labdanum for a warm, distinctly oriental, sensual scent.

The Rare Tea Collection comes in 175 ml bottles, and is exclusively available at Jo Malone in Greenbelt 5.