Something in Lucy Rose has changed | Inquirer Lifestyle 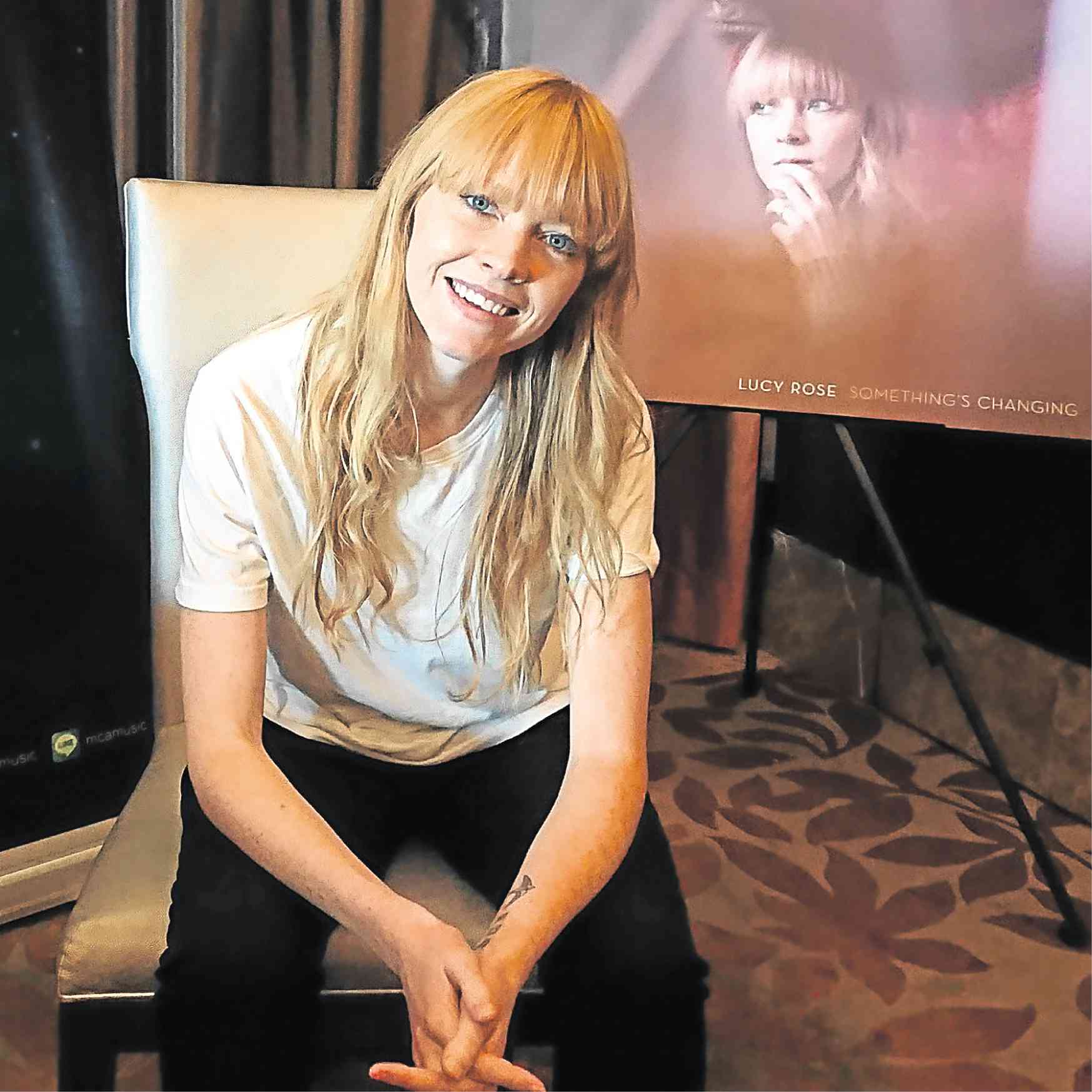 Something in Lucy Rose has changed

I first interviewed Lucy Rose in 2014. It was a phone interview, and even if Lucy was thousands of miles away in another continent, it still felt somewhat personal, with this 24-year-old up-and-coming artist sharing her story.

Never had I imagined that I would interview her again in the next three years and that it would get truly intimate. “I’m gonna shimmy toward you,” she said as she pulled her chair closer to mine just so I could hear her better, even if she was barely two feet away. She had just come from the airport, and would be performing for the third time in Manila later that evening. Her first Manila gig was during the Wanderland Music Festival in 2014 and the second was last November.

For our interview, she was dressed simply in a white shirt and black trousers, and didn’t appear to have any makeup on. No stringent entourage whatsoever, and no air of pretense.

“I find interviews quite difficult, because you end up just talking about yourself, and that’s kind of weird in a way,” she said, and gave me a wry smile.

I asked her if she’s changed at all since the last time we talked, and at first she began by saying that things were the same and she’s still playing gigs, but with a bit of prodding she stoped to give it more thought-and another answer.

“I think I’ve gone through different ups and downs and discoveries of what I want to be as an artist. I think a lot of it is about what I want to represent as well, not just about, I guess my ambitions, I think. it’s bigger than my ambitions.”

“I’ve changed a lot, yeah. Before I guess I just wanted to be a musician more than anything, just pursuing it and writing songs. And I think now I want to hopefully inspire other girls who are more similar to me than to other musicians that there are at the moment in the charts and things, or just in any sort of public eye.”

The British singer-songwriter is currently on tour to promote “Something’s Changing,” her third album which was released only in July. Except for one or two songs, Lucy says every track on the album was written after her South American tour. She and her husband had initially planned on having a well-deserved first ever vacation as a couple, when she realized that they would be traveling to places—Rio de Janeiro, Sao Paolo and Mexico City—where she had fans who have been begging her to visit for a gig.

“I really felt guilty that I was gonna be in those places and not play music for people. Doing this would be an extremely selfish thing. Going traveling, seeing the world and pretty much having a huge holiday. And I kind of wanted to do something good within it. And play songs to people,” she explained.

Lucy relied on her fans to book her gigs in venues she had never heard of, and lived in the houses of the fans who invited her to visit throughout a span of eight weeks. There were no official concert promoters; everything was DIY and admission to close to 40 gigs was free.

The documentary “Something’s Changing” recounted Lucy’s experience during the tour, as well as her personal encounters with fans who took her in their own homes.   These weren’t lavish mansions, and some were small flats shared by families, with bedrooms and single beds given up so Lucy and her husband could have modest but fairly decent accommodations.

Lucy’s latest record was inspired by the said tour, but aside from the songs and the album, she gained a lot more from the experience. It was humbling, indeed, but it has changed her for the better.

“The best thing I could take from it is, honestly, the people that I met, and how much I learned and how much they taught me about myself as well. I think there’s a part in all of us that we have to fight to not get out. Sometimes when I was in some homes, there was a part of me that was worried it’s gonna be dirty or what happens is there are places where there would be just a single bed and it would be me and my husband.  And I would be like, ‘oh God we’re sharing a single bed, are we gonna get any sleep?’ and all those things. And I just realized there was this stupid voice inside of me, an ungrateful horrid thing.”

“It gave me whole new perspective, and being in the whole trip shot that person down, that was inside me, and I don’t know where I got all those thoughts from. The experience just taught me that none of that matters, and it really is all about what you give out is what you receive when it comes to happiness. It’s my fault I’m really bad today and yeah, it’s really the simple things in life that’s really important.”