‘Look at how young I was, ang payat-payat ko!’: Derek Ramsay through the years–in book form | Inquirer Lifestyle ❮ ❯ 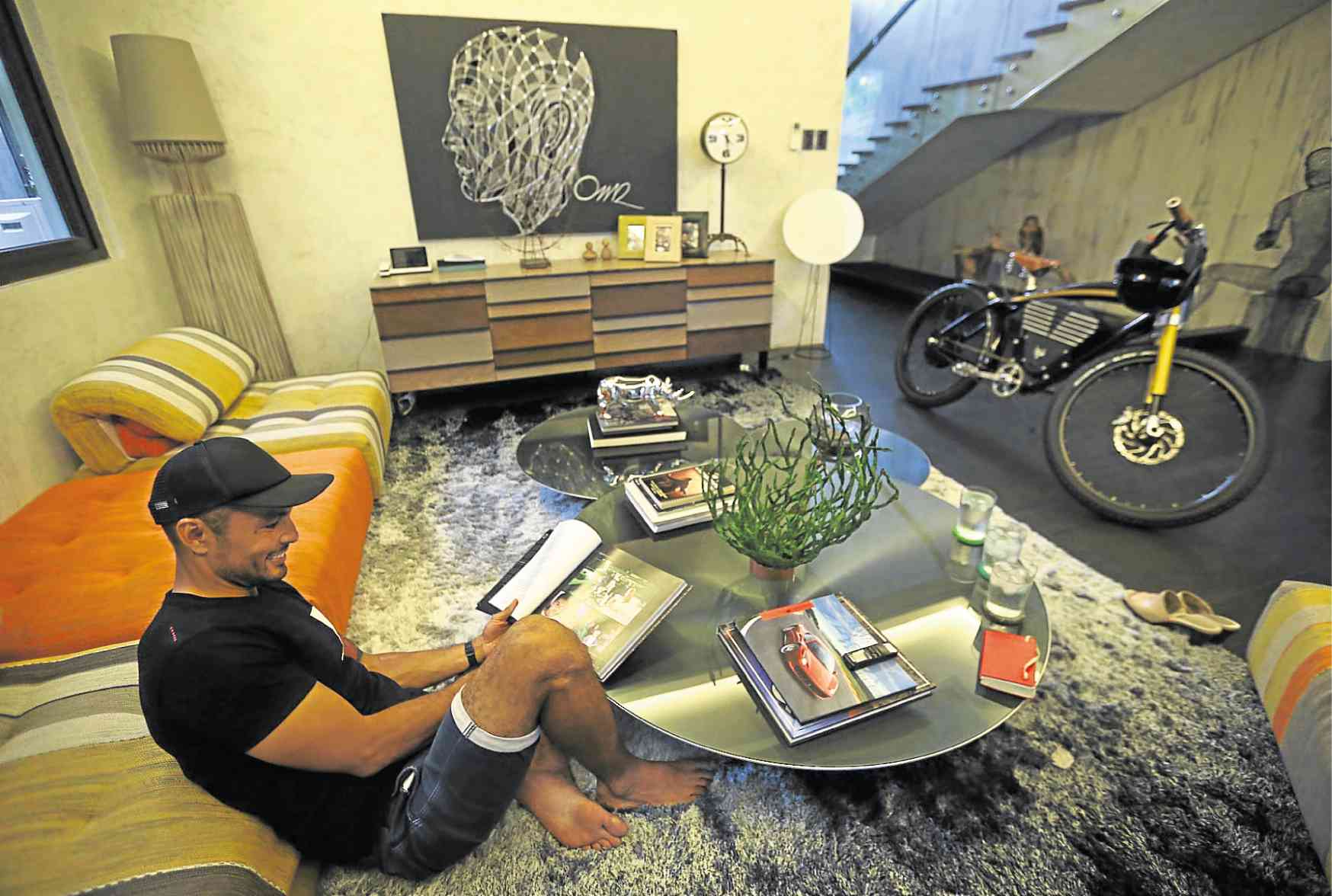 Derek Ramsay at home surrounded by his favorite things, including the limited-edition Vintage-Electric bike (right) and his pet turtle Michelangelo (partly hidden by coffee table decor) —PHOTOS BY LYN RILLON

‘Look at how young I was, ang payat-payat ko!’: Derek Ramsay through the years–in book form

Derek Ramsay had to push his electric cart two miles to his home in one of the exclusive villages in Alabang after the battery conked out at a gym.

He was in the gym to train a member of the Philippine team that will join next year’s World U24 Ultimate (Frisbee) Championship in Perth, Australia.

“I forgot to charge the cart’s battery so I had my own workout,” he joked between puffs of air.

Still, Derek was on time for our afternoon interview. The actor-athlete-influencer is set to launch a coffee table book of his photos, curated by his mother Remedios (“Medy”), on Wednesday, Oct. 11 at Manila House in Bonifacio Global City. Proceeds will go to his youngest sister Natala Catherine Ramsay-Bontilao’s project: a privately run orphanage in Lanao del Norte where she’s now based with her husband.

Natala asked Kuya Derek for help in fund-raising. So far, there was a family-organized fun run that raised more than P500,000.  Also a meet-and-greet dinner for friends that added to the construction budget.

Mom Medy had more ideas, however. Why not create the book of Derek’s photos? “It’s something good to have and show your kids in the future,” she explained.

Derek was strongly reluctant to the suggestion and refused to help.

But Medy was adamant. With help from Derek’s manager, Joji Dingcong, she was able to persuade local fashion magazines and companies whose products Derek endorsed to give permission to include their photos of her son in the book.

Lifestyle watched Derek skim through a copy of the book for the first time. Fresh from a shower, the actor plopped himself on his sofa and snickered silently as he moved from page to page.

“Look at how young I was, ang payat-payat ko!” he exclaimed while looking at his shots as a teenage model. “And I had hair! Jeez! So weird! Now everyone knows me as Mr. Shaven Head Guy!”

The 200-page hardbound tome begins with Derek’s photos as a fat infant (“Good thing they did not include that photo of me wearing a hat while peeing at myself!”) and moves on to family photos and class pictures during his time at Cheltenham College in England.

Many pages are also devoted to the actor’s modeling days, candid shots of his sporting events and his movie posters. Derek said he cherishes the family and sports photos the most.

“My joy right here,” he added while looking at his parents Derek Sr. and Medy’s photo. “If it weren’t for these two, I wouldn’t have this life.”

A grimace then etches itself on his face as he turned to the page showing him on a stretcher, about to be rushed to the hospital after injuring himself in an Ultimate Frisbee game.

“I get goose bumps up to now,” he said, showing off his arms.

Although he eventually agreed to his mother’s book project, a part of Derek still feels awkward as its subject.

But isn’t raising funds to build an orphanage worryingly close to war-torn Marawi a baby step?

Derek keeps close tab of his sister’s project. “Meron nang structure, nothing big. But that’s how you start,” he said.

Derek said after  Natala married “a nice guy na walang kayabang-yabang” from Maranding town in Lanao del Norte whom she met during a spiritual retreat, she began to change from a cosmopolitan lady to a simple, more introspective woman.

But life in the province could make one restless at some point, so Natala first went back to school “so she can get a license to put up a school, and now she has a Montessori. It’s now one of the best schools in the area, with 300 students,” her brother said.

Derek believes Natala is still on a quest to “finding what she wants to do with her life.” As the supportive kuya, the actor is also hands-on in the orphanage project.

“Mahirap palang magpatayo ng orphanage. So much paperwork! And you only want to help. My sister is so stressed already and (the locals) are getting impatient,” he said.

The hands-on quality is also evident in his home.  Derek is clearly proud of his involvement in the design and construction of his two-story home and the furniture he chose to put in it.

He pointed to a light switch that he said was askew when installed by a worker.

“I guess I was a contractor’s nightmare. I’m very meticulous.  I don’t like coming home to a messy house, everything has to be in order. When I built this, tutok talaga,” Derek said.

Even if the portion of the wall where the switch was placed was made of cut marble, the actor demanded that the switch be repositioned at a right angle.

It is evident that Derek’s home is his sanctuary. At one point, he showed Lifestyle his bedroom with its neatly arranged beddings and spare furniture.

The shirts, pants and coats in the walk-in closet are spaced equally. There was no soap or toothbrush loitering on the sink and all toiletries stand in line on glass shelves. “I can’t stand clutter,” he explained.

Still, his abode is clearly a man’s house. There are at least three sports cars in the garage. A limited-edition Vintage-Electric bike (“It’s one in 150 in the world!”) looms large in the living room. Inside a large glass bowl atop the coffee table is Michelangelo, his pet turtle.

Derek asked his guests to feel one of the somber gray walls that look like abstract murals with their fingers. “That’s just cement, but I smoothed it with wax. Layers and layers of wax until we got (the right feel),” he noted.

The actor shared that he’s thinking of unloading his cars to eventually create more houses. And then he shifted the conversation to his mother Medy whose house in Tagaytay he visits often.

“Everybody loves my mom. She’s awesome. When she’s at home, it looks like a shabu lab because she cooks all this soap and stuff. ‘Mom, your room looks like a drug den.’ Cooking away to make organic hand sanitizers, shampoo, soap from banana sap. But everything really works,” he said.

“When I had my (Frisbee) accident, it was one of those rare moments when my mom came to watch me, but she was far away from where it happened.  She heard it from the other side of the field. She didn’t see it but she knew it daw. She saw the ambulance (approach) and she knew it was me. She sensed it,” the son recalled.

Dad Derek Sr. was also watching. The father rushed over to the scene but was apparently unaware it was his son who was injured.

“My dad ran to ask, ‘What’s the score?’” the actor said laughing.

“The World of Derek Ramsay” will be launched on Wednesday, Oct. 11, 6 p.m., at Manila House, Net Park Building in Bonifacio Global City. Proceeds will go to the construction of an orphanage-project of Natala Catherine Ramsay-Bontilao in Lanao del Norte.