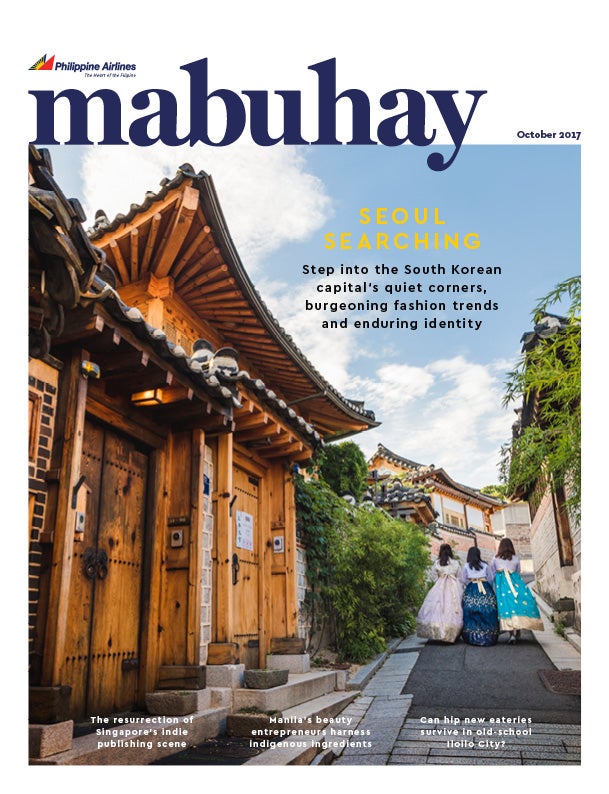 Mabuhay, the inflight magazine of national carrier Philippine Airlines (PAL), has been nominated in the 2017 Folio: Eddie & Ozzie Awards, to be held in New York City on Oct. 11. The annual awards is organized by Folio, a business intelligence company for magazine publishing based in the United States. Mabuhay is a finalist in the Series of Articles category for “Going Global,” its signature section where outstanding Filipinos living in PAL destinations are profiled with their two-day itinerary to their city. “Going Global” subjects have included New York bag designer Rafe Totengo, Dubai fashion designer Michael Cinco, Hollywood party planner Rembrandt Flores, London restaurateur Irha Atherton, Brisbane artists Alfredo and Isabel Aquilizan, Hong Kong architect and interior designer JJ Acuña, Tokyo shoe designer Johann Manas and Shanghai architect Lyndon Neri. In the October issue of Mabuhay, the magazine features Seoul-based fashion stylist Sarah Kate Watson-Baik, who grew up in Oroville, Northern California, but moved to South Korea in 2006. “I’m half-Filipino on my mom’s side—her family is originally from Quezon City, but she immigrated to America and enrolled in the United States Air Force when she was 18, which is where she eventually met my dad,” Baik tells Mabuhay. “As a kid, my lola cooked us lots of Filipino food—lumpia, pancit, lechon… the works. I can honestly say that nobody does roasted pig like us Filipinos!” Mabuhay underwent a design and editorial revamp in July 2016 after Singapore-based publisher Ink won the contract. Ink is an award-winning company that has five offices around the globe and publishes magazines for airlines such as PAL, Qatar, Etihad, United, SilkAir and American Airlines. “I am so honored to be working with Philippine Airlines and thrilled that our team has been able to add prestige to our national carrier with our nomination in this much-coveted industry award,” said James Ong, Mabuhay editor in chief. “We work hard on each issue of Mabuhay, making sure that we present the Philippines to the world in the best way possible.”