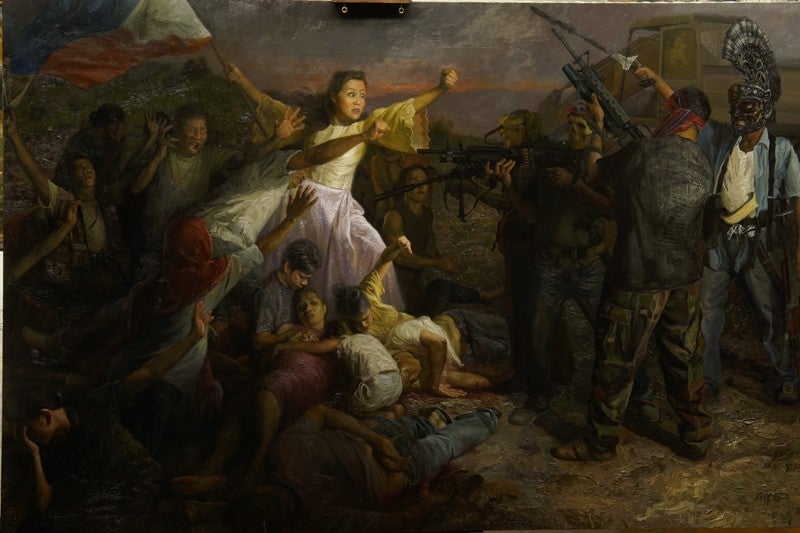 “The Modern Holocaust” (oil on canvas, 64 x 96 inches, 2017) is Galicano’s rendition of the “Maguindanao Massacre” in 2009 in Ampatuan, Maguindanao, which is said to be the single deadliest event for journalists in history: 34 out of the 57 killed were members of the press.

It made headlines for the Philippines as one of the most dangerous countries in the world.

Galicano says that, artistically, his depiction is inspired by Spanish painter Francisco Goya’s “El Tres de Mayo,” known in English as “The Executions.”

Goya’s work itself has been recreated over the years by Edouard Manet, Pablo Picasso, Yue Minjun. Galicano does his own take on the bifurcated composition.

The canvas is bisected to visually convey to the viewer the division caused by war. On the one side, he has the faceless executioners—visages turned away or hiding behind masks of anonymity—in this case, the masks of Death and the Roman centurion.

Their weapons vary from the modern long-arm and the traditional Muslim kris to the heavy equipment in the background, alluding to the excavator allegedly used to bury the slain in the killing fields where the remains were found.

The executioners have neither race nor religion in common but only the blinding aggression to unite them.

On the other side are the persecuted, the defiant and the fallen. They are led by Inang Laya, the personification of the Motherland. She has her hands outstretched in the crucifixion pose, another nod to Goya, and with a similar pop-eyed expression.

Their faces are clear and defined as the victims of war are individuated and humanized. Some of the dead figures were faithfully referenced from crime scene photos and videos.

As backdrop, the knoll is a copy of the actual terrain where bodies were retrieved.  The artist claims it is by coincidence the topography of the gruesome scene mimics the composition of the landscape of Goya’s oeuvre.

Bleak skies and a fading light add tension to the emotionally charged scene. The undaunted face and unsullied dress of Inang Laya are the highlights that suggest that there may be hope even in the darkest hours.

Galicano uncategorically indicts violence in whatever guise it masquerades as. Thus, the piece goes beyond Maguindanao. It speaks of the harm inflicted on humanity and identity when violence is allowed to prevail.

Galicano believes art should memorialize defining moments of our history, both the good and the bad.

It is in seeing what we have come to as a people, without pretense or artifice, in full and gory detail if need be, that we come face to face with our reality.

Only then do we have hope of learning from past mistakes and developing a collective memory as a people.

Galicano is a master of realism who’s particularly sought out for portrait commissions. He won the Grand Prize at the International Portrait Competition of the Portrait Society of America.

Once in a while, the painter takes a break from his commissions to work on a statement piece that, according to, him is his contribution to the Filipino struggle “to define ourselves through our art.”

His 2014’s “Triumph of Life over Death” is a tribute to the victims of supertyphoon “Yolanda” (Haiyan), extolling the heroism of the Filipino in times of tragedy.  —CONTRIBUTED

“The Modern Holocaust” will be on view at ManilART 2017 at SMX Convention Center, SM Aura, Taguig City.