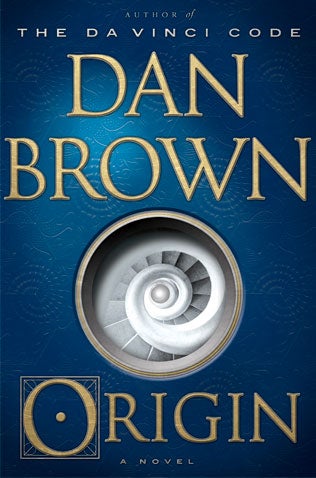 Dan Brown’s ‘Origin’ is his best–and worst–book yet

Fact: All art, architecture, locations, science and religious organizations in this novel are real.” This is the text that appears at the beginning of Dan Brown’s new novel “Origin: A Novel” (Doubleday, New York, 2017, 464 pages).

This is technically true, but it is the relationships between these things that are fictional. It is this literary terra incognita that Brown’s signature protagonist, the symbologist Robert Langdon, occupies.

Brown introduced Langdon, the Harvard professor of symbology and religious iconography, in 2000’s “Angels & Demons.” But it was Langdon’s second appearance, 2003’s “The Da Vinci Code,” that really made Brown both successful and controversial.

Brown’s books have been so popular that Ron Howard has directed Tom Hanks as Langdon in three big-budget feature film adaptations.

Brown’s Langdon books are known for their exploration of hot-button conspiracies such as the Illuminati, freemasonry and, most notoriously, the Holy Grail and the continuation of Jesus Christ’s bloodline, conspiracies which Langdon must unravel while running for life.

Sometimes, the novelist just rubs others the wrong way. In 2013, Philippine officials hit Brown for a scene in “Inferno” where he refers to Manila as “the gates of hell.”

Brown doesn’t shy away from the furor; in fact, he embraces it. His books are talked about precisely because he courts controversy.

His Langdon books are also very effective. Brown has a formula that works. He sticks to it and readers flip feverishly through the pages trying to get to the bottom of the latest conspiracy Langdon has landed in.

The Langdon books begin with some kind of event in which Langdon gets mixed up  and, implicated in a crime, has to go on the run in an exotic location with a beautiful female character.

He has to figure out conspiracies and secrets through hidden puzzles and clues that apparently, fanatics and lunatics chasing him don’t want exposed.

In “Origin,” Langdon has come to Spain to attend a bizarre announcement by his former student, a Steve Jobs-style futurist and billionaire named Edmond Kirsch.

“I need your advice,” Kirsch tells him. “I fear my life may depend on it.”

That announcement has to do with a discovery Kirsch has made regarding the creation of man.

“It will not shake your foundations,” Kirsch warns. “It will shatter them.”

Kirsch winds up dead before he can announce his findings and Langdon races to find out what it is together with the museum director Ambra Vidal even as a shadowy figure known only as the Regent is hunting him down. In the process, “Origin” weaves in discussions of artificial intelligence, the Spanish monarchy and the strange Palmarian Catholic Church.

At the heart of “Origin” is Kirsch’s discovery, which challenges not only Christian Creationism, but the creation stories of virtually every religion.

“Where do we come from,” Kirsch asks. “Where are we going?”

In the process, Brown deals with some serious discussions about the origin of man, pretty heavy stuff that lean toward the profound.

But to get Langdon to where he is supposed to be to release this discovery, Brown has to put together a rather preposterous series of events in “Origin.”

The contrivances and coincidences have no places to hide. He lays it on thick, whether in terms of overcooked language, the various pieces of art that somehow find themselves in Langdon’s way or the ancillary subplots that cram themselves in the remaining spaces.

Perhaps the biggest mystery in the book—more than the discovery—is the identity of the Regent, which readers can accept as clever or reject as ridiculous.

Not to be taken seriously

But Brown is best read by not taking the conspiracy elements seriously, dealing with “Origin” as diversion rather than dissertation. Once readers approach “Origin” as pure fiction, Brown proves himself to be able to tell a propulsive story thanks to the relentless march of his formula. Langdon, who is an impossibly intelligent, athletic and good-looking creation, is a good example of just how much Brown’s novels are fiction, regardless of disclaimers and violators to the contrary.

“Origin” is Brown’s usual bombast and storytelling on a whole new level. It’s ambitious and effective, but also pretentious and predictable in parts.

In other words, it is the perfect Robert Langdon yarn—exactly as the author’s fans want—all of which marks “Origin” as Dan Brown’s best—and worst—novel thus far.