From heavy to light–and on pointes: BP restages ‘Amada’ and other classics | Inquirer Lifestyle ❮ ❯ 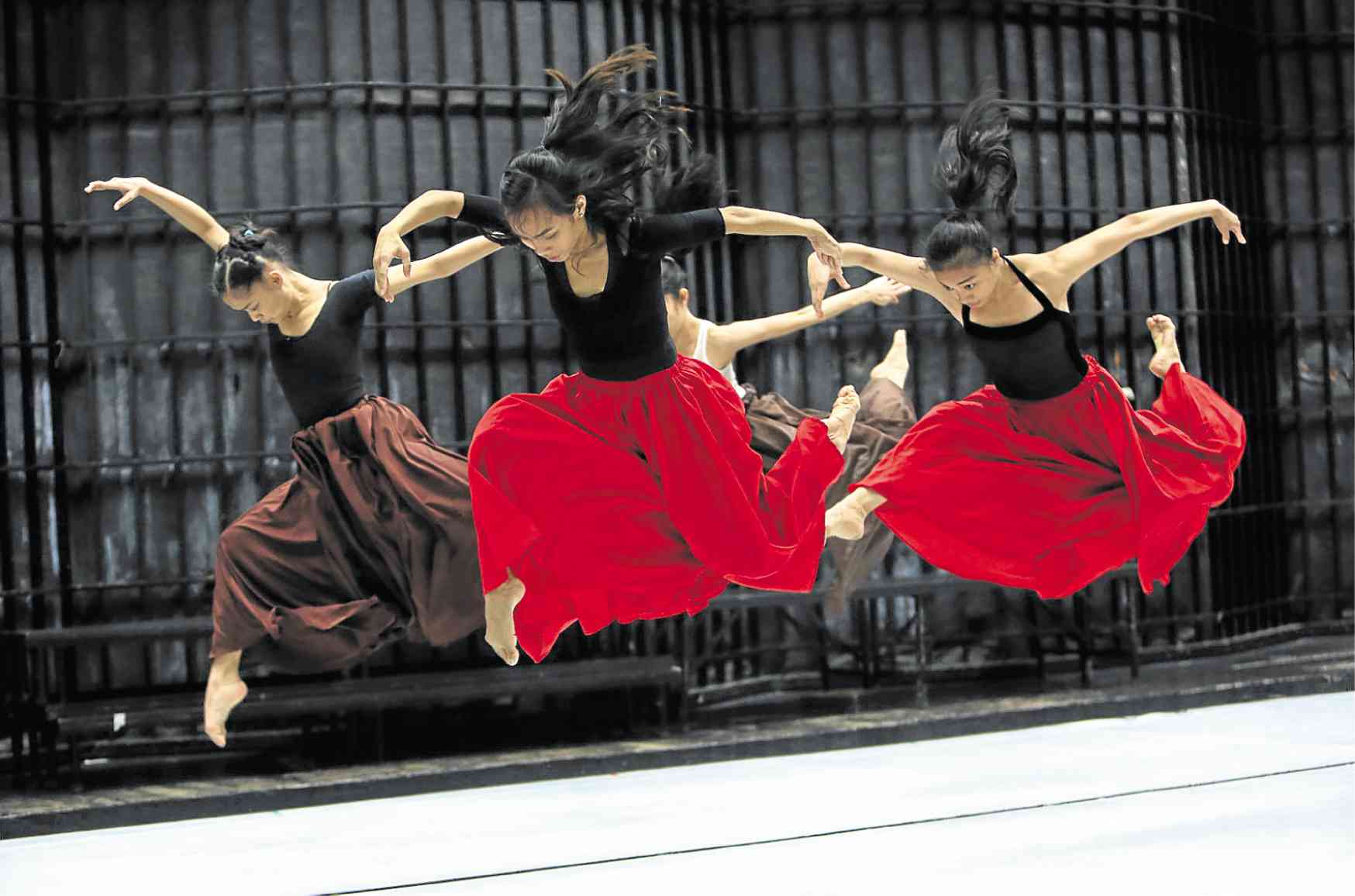 From heavy to light–and on pointes: BP restages ‘Amada’ and other classics

Alice Reyes was at the sidelines watching a dozen or so young dancers sit on folded legs, their torsos swaying forward and back randomly as they moaned.

The swaying went faster and their moans became more frantic. Then, altogether, the dancers bowed their heads on the floor, threw their heads back and screamed.

The afternoon’s rehearsal was for “Amada,” Reyes’ 20-minute theater and dance adaptation of Nick Joaquin’s short story “Summer Solstice.” The dancers will do the mysterious ritual called “Tadtarin” where Amada (or Doña Lupe in Joaquin’s story) participates in defiance of husband Don Rafael.

Reyes, artistic director emerita of Ballet Philippines (BP), did not say whether she was happy with the scream quality (they are not singers, after all). She simply motioned with her head to demonstrate how far back the younger ones were to tilt theirs to let their voices out.

“There’s still time,” she said with a reassuring smile.

“Amada” was first performed in the 1970s with Reyes as Amada and Nonoy Froilan as Rafael. (The piece was her thesis, part of academic requirements to gain a Fine Arts master’s degree, major in Dance, at Sarah Lawrence College, New York.)

Then Cultural Center of the Philippines artistic director Lucrecia Kasilag, who wrote the musical score, was named National Artist for Music in 1989, while “Amada’s” set and costume designer Salvador Bernal was National Artist for Theater and Design in 2003.

Floirendo described “Amada” as “very dramatic.” Having four National Artists in the original playbill alone should be reason enough to watch this historical piece.

Reyes admitted she was already eyeing “Itim Asu,” another BP original choreographic work, for inclusion in “The Exemplars,” the dance anthology of the company’s best productions from the ’70s to be staged Oct. 20-22 for BP’s run-up to its golden anniversary in 2019.

“Amada,” however, is considered to be more significant this year because of the CCP’s celebration of Joaquin’s birth centennial.

Reyes’ role will be reprised by Candice Adea, the country’s top ballerina who wowed critics in Helsinki, Boston and Hong Kong, and Ronelson Yadao, who has danced with BP and a ballet company in Taiwan, and is now with DLSU-College of St. Benilde.

“It was very exciting,” Reyes recalls the period when “Amada” was in production. “King (Kasilag) was writing music for me. It’s exciting when you have music written for you. Badong (Bernal) coming in and doing the costumes… and I’ve always loved Nick Joaquin.”

Reyes said “Amada” could not be performed for the longest time because she could not find a male dancer that could match Froilan’s technique and stage presence, until recently when Reyes saw Richardson Yadao, elder brother of the current Don Rafael, and made him portray the character in another production.

“It’s a strange word to use but Nonoy had weight. Some (dancers) are so technically good but walang weight. This is something hard to explain because dancers are supposed to be weightless, to jump and stay in the air, (but to portray Don Rafael), dapat meron kang hagod sa space. Ron (Yadao) has it. His brother has it. Nonoy has it,” she pointed out.

“Amada” combines literature, folklore and ethnic music. It also mixes ballet and modern dance, at times featuring jagged movements that reflect the turmoil of the characters.

“The dancers are stronger now. The first batch in the ’70s were all ballet dancers and I had to teach them modern dance for six months. They had no idea what modern dance was all about,” Reyes recalled.

Apart from “Amada,” the dancers will also have roles in four other pieces that make “The Exemplars,” including “Ang Sultan,” choreographed by Gener Caringal and set to music by Kasilag that premiered in October 1973; “Concertino,” a major landmark in modern dance choreographed by American dancer Pauline Koner; “Valse Fantasy,” a delightful and airy number dotted with leaps and turns, created by Muñeca Aponte; and the emotional “Songs of a Wayfarer,” a story of unrequited love that will also feature Adea and Yadao in lead roles.

Reyes wishes the audience would note how choreographer Caringal, in “Ang Sultan,” ably told through movement the story of a powerful man’s opposition to his daughter’s love for a slave and its fatal consequences.

“It’s very hard for a choreographer to tell a story,” Reyes said. “It’s the hardest thing. Iba ’yung literature where you read everything, iba ’yung what you see on stage. Sometimes you watch and ask ‘Anong nangyari dun?’ If you have to count on program notes for people to understand your story, that’s a sign of failure. You’re not telling the story. Caringal tells the story in 13 minutes.”

“Concertino” has “a very difficult style” that BP’s members mastered while choreographer Koner had a stint in Manila courtesy of the John D. Rockefeller Fund.

“Pauline Koner’s style was so different. Natutunan namin in the ’70s in three months. The current crop of dancers learned it in three weeks,” she exclaimed.

Reyes recalled going through 14 curtain calls when BP performed “Songs of a Wayfarer” (choreographed by Norman Walker and set to music by Gustav Mahler) in Germany. The dancers were about to get dressed when the stage manager called them back because the audience would not leave.

“Valse Fantasy” meanwhile, intends to be a terpsichorean showcase.

“I always want to put out there that our dancers are so versatile. They can go from heavy to light and on pointes,” she said.

“We’re showing off the wealth of the company! I think the five pieces show the versatility, the variety of the repertoire and the fact that they have been tested by time. These are from the ’70s but are still wonderful to watch. The themes are still universally true and current. There’s a caste system, inequality and injustice (in “Ang Sultan”), and (“Concertino”) shows the women are still earning less than the men,” Reyes added.