Model speaks on 'racist' Dove ad: ‘I am not a victim’ | Inquirer Lifestyle ❮ ❯ 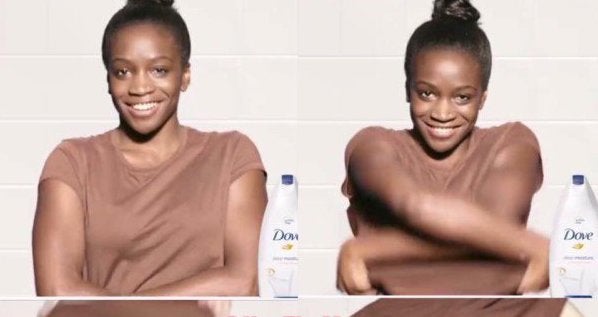 Model speaks on ‘racist’ Dove ad: ‘I am not a victim’

A model from the “tone-deaf” Dove ad has spoken up on the issue, citing that she isn’t a “victim of a mistaken beauty campaign.”

The company drew flak after releasing a video where models in nude shirts were seen removing them to reveal another model.

In the ad, a black model takes off her shirt to “change into” a white woman; the imagery has been criticized as “racist” and insensitive.

Since the ad has been taken down, only snapshots of the black model and the white model have been circulated; the full ad shows women of different skin tones changing into one another.

In a thought piece published in The Guardian, the black model in the ad, Lola Ogunyemi, states that she is Nigerian, “born in London and raised in Atlanta.”

“Historically, and in many countries still today, darker models are used to demonstrate a product’s skin-lightening qualities to help women reach this standard,” she writes.

She relates that she was happy to represent black women through Dove. “If I had even the slightest inclination that I would be portrayed as inferior… I would have been the first to say an emphatic ‘no.’”

While she did not know the sequence by which the women would be presented, she and family and friends “loved” the final output.

Ogunyemi was shocked that she became “the unwitting poster child for racist advertising.”

She cites that Dove’s tarnished reputation when it comes to ads featuring women of different races was a factor in the ad being “misinterpreted.”

A previous ad showed three women lined up from darkest to lightest skin color. In the background is a board with scratch marks that says “before” and a smooth board that is labelled “after.”

Dove has since apologized for the ad, but the model believes “they could have also defended their creative vision, and their choice to include me, an unequivocally dark-skinned black woman, as a face of their campaign.”

“I am not just some silent victim of a mistaken beauty campaign. I am strong, I am beautiful, and I will not be erased,” she concludes.  Niña V. Guno /ra

Dove apologizes for Facebook soap ad that many call racist