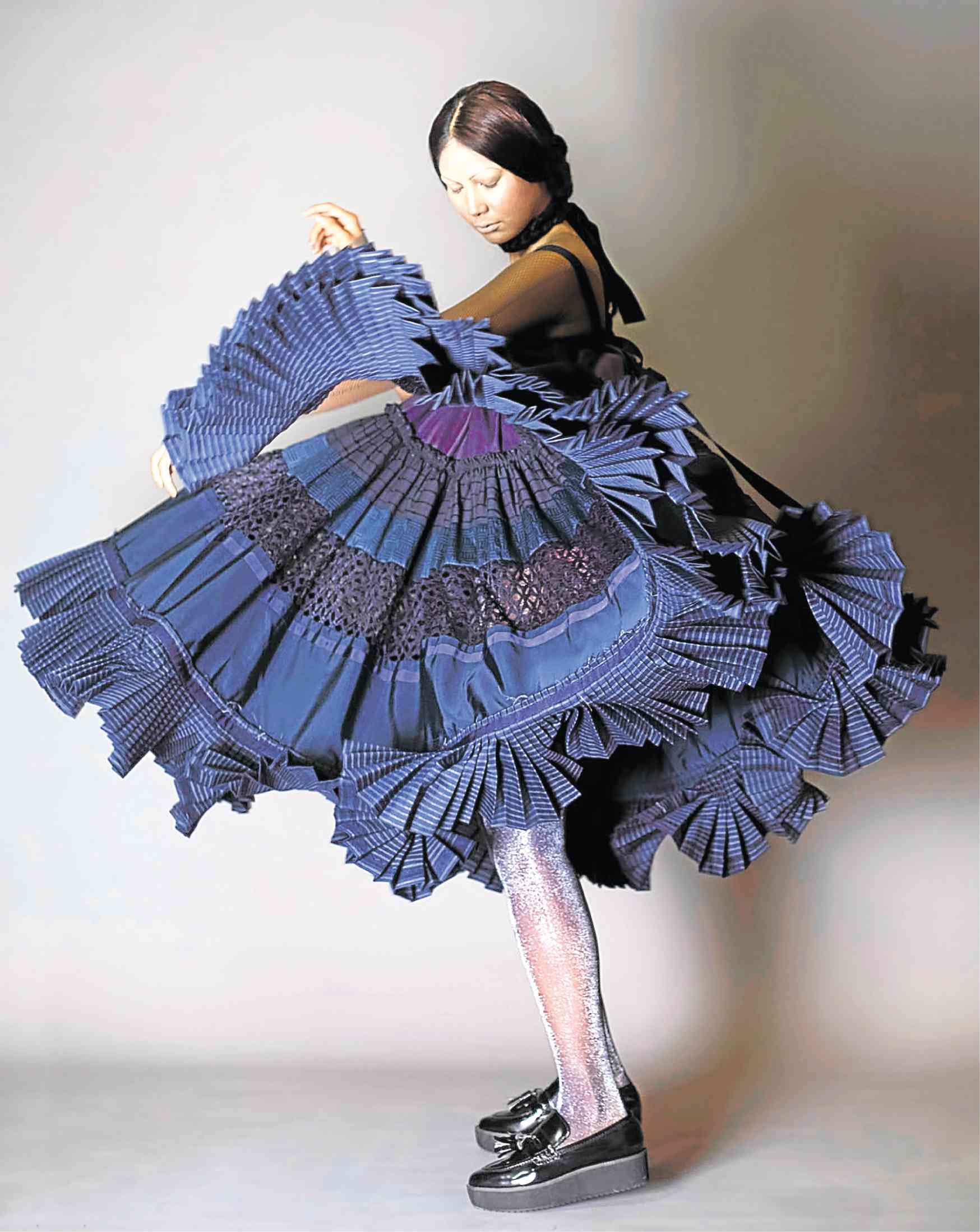 This multitextured dress is a preview of Samson’s vow to “step up” for the Red Charity Gala’s big stage.

It’s only days before the Red Charity Gala (RCG) and Joey Samson’s excitement from the previous weeks has been replaced with nervousness and dread, and that nagging feeling of self-doubt that overcomes every fashion designer who’s about to take the big stage: Will his collection be good enough for the much-anticipated annual gala?

There’s a sense of calm in Samson’s Makati atelier this rainy Tuesday afternoon, belying the inner turmoil being felt by the designer.

The entire collection of 40-plus looks is finished and ready for the next day’s final fittings. And save for the occasional client popping in for a fitting or pickup, RCG’s 2017 featured designer is all set for tomorrow night’s black-tie event (Oct. 14, Shangri-La at The Fort).

“I’m nervous, but I have to trust in myself,” he says. “I ought to believe and stand behind what I have made. This is me, this is the DNA of my work.”

Samson’s anxiety is justifiable. In the last 14 years, he has made a name for his unconventional and forward-thinking aesthetics, and has created a niche and loyal following.

His deconstruction of forms and the androgyny of his style have made him distinct in a landscape saturated with the same old, same old. Avant-garde is a word often used to describe his work.

He was a surprise choice as the ninth featured designer of the annual gala, since his style doesn’t fit the mold of past RCG designers. The delicacy of his work requires closer inspection.

He’s not about show-stopping glamour—there’s no ostentation or showiness in his work, his palette typically neutral and muted. He doesn’t do glitter that could blind the far corners of a grand ballroom.

Which isn’t to say he won’t try: In a previous interview, he vowed to “step up and keep an open mind,” and said he’s using more color and texture in his RCG collection, even beadwork and sequins in some. A devout Catholic, he was inspired in part by a recent European pilgrimage he took with his mother and sister.

In other words, Samson is a palate cleanser—clean and neutral, like a refreshing sorbet between heavy courses during a meal. The RCG organizers felt his turn on the stage was necessary to reboot the senses of patrons who have been served a long parade of show-stopping ball gowns year after year.

“As we approach our 10th year, it is even more vital that we honor designers who seek to redefine Philippine fashion, and Joey Samson is one designer whose style is constantly evolving yet remains true to himself,” Tinga says.

“He is one of the most creative designers in the country now. His style is distinctive, modern and fresh. He manages to make classics new again with his unique take on construction and form.”

“I think the unexpected pairing of Joey Samson with the Red Charity Gala show should be quite interesting,” says Mark Higgins. “Every seasoned designer has the ability to flex their artistic muscle and infuse their own unique style into anything they set their mind to creating, no matter how seemingly improbable. I have no doubt Joey will achieve just that.”

“I’m a fan of Joey’s work,” adds Sandy Higgins. “He has a very distinct signature style that is quite unlike that of other Filipino designers. His aesthetic comes from within, almost from introspection. I think Joey’s work brings to the table another, somewhat unexpected, dimension—for both Red Charity Gala and the Philippine fashion scene.”

One of Samson’s close friends and confidantes, Cebu-based designer Edwin Ao, makes note of Samson’s passion for his craft. “He doesn’t sleep if he is not happy with a certain design. His perfectionist quality is what keeps him burning.”

Ivarluski Aseron is one of Samson’s oldest friends and contemporaries in the industry. People often perceive them as rivals. That couldn’t be farther from the truth, says Aseron, since they’re quite supportive of each other.

“I was a year ahead of Joey as member in the now-defunct Young Designers Guild (YDG),” Aseron says. “I remember during his application that he was already pushing androgyny by incorporating tuxedo details in womenswear. All throughout the years he has stuck to his true aesthetics.”

At YDG, the duo hit it off and became close friends. Hours-long phone calls between them are a habit they’ve kept to this day. Samson and Aseron would be seen often together that people mistake them for one another.

Lifestyle columnist and jewelry designer Melanie Cuevas is another longtime friend and client of Samson who has witnessed the evolution of his work, since she was editor of Metro magazine, where they worked together on several Metrowear shows.

“I think that one of the challenges of every designer is to be consistent yet introduce something new with every collection,” says Cuevas. “Joey always surprises me by introducing something I haven’t seen, yet stays true to his androgynous/minimalist aesthetic.”

Samson’s work does not scream, says Ao. “From his love of menswear details, he is able to translate strong elements to the female form, but he’s also able to translate female elements into menswear, which only a few designers can pull off.”

“Joey’s distinct, iconic female is the antithesis of the fairy-tale princess—she has been deconstructed and reconstructed into a modern, thinking woman,” notes Mark Higgins. “Much of her silhouettes and fabrics have been borrowed from men’s clothing, with not a lot of chiffon or heavy embellishment in her wardrobe.”

As is typical of Samson’s brand of pushing the envelope, Cuevas says it may be prudent for guests to not expect the usual ball gowns.

“Of course, Joey is capable of doing [ball gowns], but knowing him, formal wear will be interpreted in various ways,” she says. “When it comes to Joey, I’d like to expect the unexpected. Case in point: He’s the last person you’d think to use sequins, but he’s making me wear just that for his show. It’s an unusual choice, yet the design is very much still Joey.”

“The collection is totally in the opposite spectrum of past shows, and maybe this is what will make this year’s RCG an outstanding show,” says Valdes. “It may turn out to be the best show yet.”