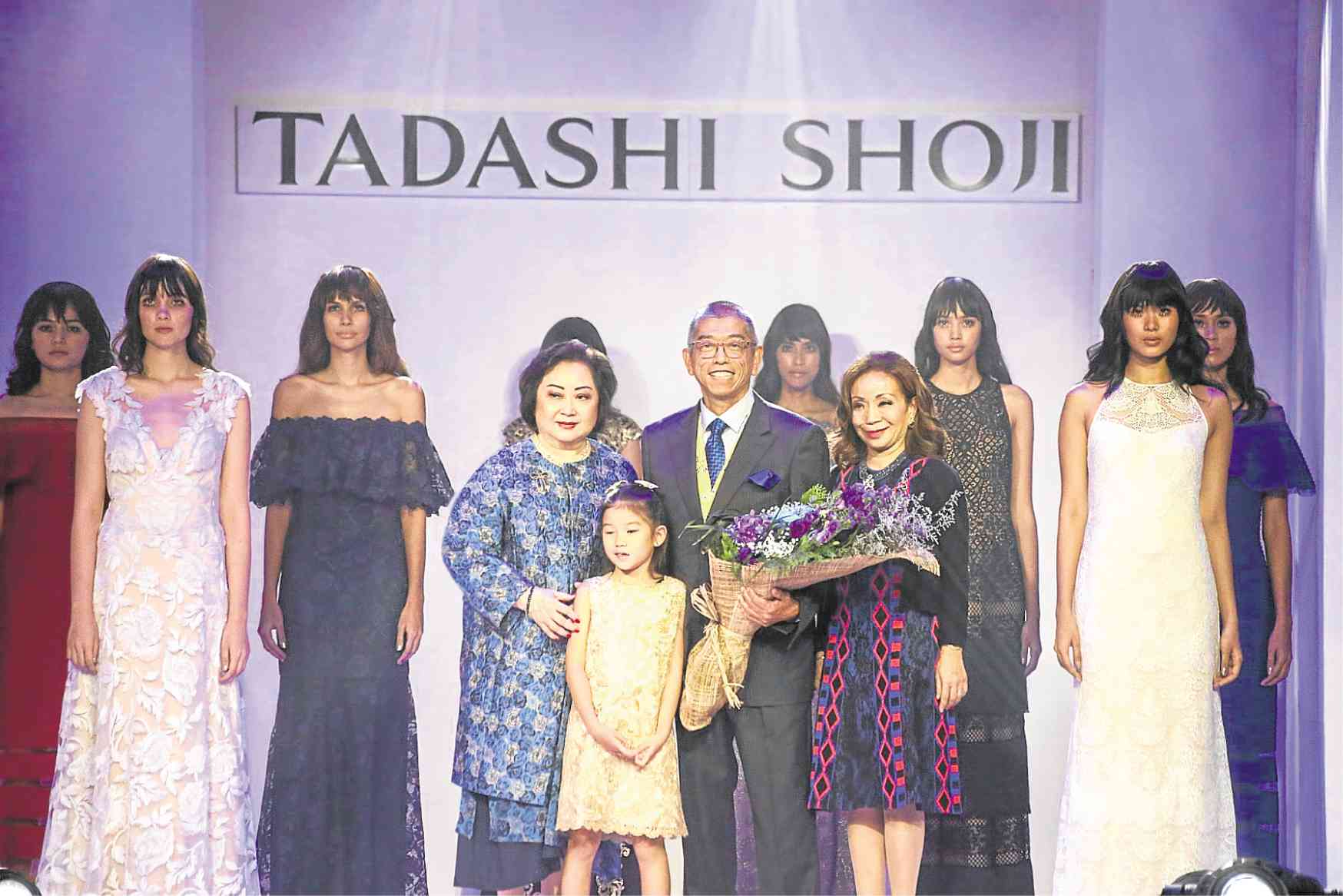 But since he landed Academy Award-winning actress Octavia Spencer in the best-dressed lists throughout the 2012 Hollywood awards season, the Los Angeles-based Japanese designer has become synonymous with flattering gowns for plus-size women.

“I don’t mind!” he told Lifestyle emphatically before a media lunch at Old Manila in Peninsula Manila this week, hosted by Rustan’s in his honor.

“I’m confident,” he added with a chuckle. “My philosophy is, I can design for any woman of any shape, any age, and in any country. I know the technique. Dressmaking is a visual illusion—how to make someone with a curvy figure look small-waisted. It’s about giving women their ideal figure [through their dress].”

On Tuesday, Shoji presented his Fall 2017 collection at the Pen’s Rigodon Ballroom as the featured designer of Rustan’s’ Sapphire Ball, the culminating event of the luxury department store’s 65th-anniversary celebration.

Bringing in the world-class designer for the milestone event “is only one of the several, hopefully meaningful, ways that we want to express our deep gratitude” to loyal customers, said Donnie Tantoco, Rustan’s president.

The Fall 2017 collection was inspired by the youth revolutions of the ’60s and ’70s, said the designer. This was evident the moment the first model walked in—to Jimi Hendix’s “Purple Haze.”

Shoji was born in Sendai, Japan, and studied fine arts in Tokyo before moving to the United States in the ’70s, where he later studied fashion design while working for a clothing manufacturer.

The look of Hendrix was also an inspiration for the collection, thus the velvet and brocade coats and jumpsuits shown in New York Fashion Week in February.

(For Rustan’s, however, New York-based buying director Reggie Aguinaldo said they brought in only the commercial pieces. The pieces shown at the Sapphire Ball were cocktail dresses and eveningwear, in romantic laces and rose-printed chiffon.)

While he dresses celebrities and social-media influencers, Shoji said he finds it more exciting to dress real women. “First, there are more regular women than celebrities,” he noted in jest.

“I don’t have muses. I think more of regular women wearing my clothes. That makes me happy.”

Shoji’s 36-year-old namesake brand has been with Rustan’s for 24 years.

“We were a very small company when Rustan’s came to us,” he said. “I wasn’t even doing fashion shows in New York. I joined [New York Fashion Week] only 11 years ago. This gala show is a privilege. We have a great relationship with Rustan’s and it’s very rare.”

Anton T. Huang, president of SSI Group in the Rustan’s Group, recalled the roots of his family’s affiliation with the Japanese designer.

“Rustan’s’ long and much cherished partnership with Tadashi Shoji—now lasting over two decades—began when my grandmother, Glecy Rustia Tantoco, paid a visit to his showroom in New York in 1993,” he said. “From that initial visit a mutual bond of admiration and respect was quickly established that has served Rustan’s excellently both creatively and commercially.”

The Tadashi Shoji brand represents “innovation and modernity; in others it’s about preserving what is classic and making that relevant and iconic today,” said Tantoco.

“In this day and age of fast fashion, Rustan’s in collaboration with our designers, wants to continue to elevate and preserve the heritage, elegance, the majesty and the soul of the evening gown,” he added.

Tantoco also quoted a Vogue editor who said that a gown is the ultimate expression of the fashion fantasy. “It bestows upon its wearer a certain transformative magic, lending her a specific grandeur, sophistication and romance.”

Shoji’s designs “never fail to surprise retailers, induce buyers and, of course, mesmerize the critical eye of the fashion media because of the sheer breadth of his styling [and] the originality of his work,” said Huang.

Since his last visit in 2012, Shoji has launched a perfume, shapewear and lingerie, accessories, bridal wear and children’s dresses.

A fourth-generation scion of the Tantoco clan, Kenzi Huang, 6, walked with Shoji at the gala’s finale, the young girl wearing a Tadashi Shoji dress.

Asked why he thinks not many designers make clothes for plus-size women, it’s “because of image,” said Shoji. “Or maybe they don’t have the skills to make clothes for bigger women and still make them look good.”

Proof of Shoji’s unique skill is that Spencer, who has since become a big star following her Oscar win for “The Help,” still goes to him for red-carpet clothes. She wore Tadashi Shoji throughout the 2017 awards season, where she was nominated for her role in “Hidden Figures.”

“Most actors in Hollywood, when they become big stars, they switch to big-name designers,” Shoji said. “Octavia didn’t change… We don’t pay celebrities to wear us.”

“If I can inspire women to want to wear what I will show [at the gala], if I can create that desire, then I’m happy,” Shoji said, before adding with a laugh, “if they actually wear my dresses, I’m even happier.”