Cebuanos get a kick out of ‘Face-Off: #OOTD’ | Inquirer Lifestyle ❮ ❯ 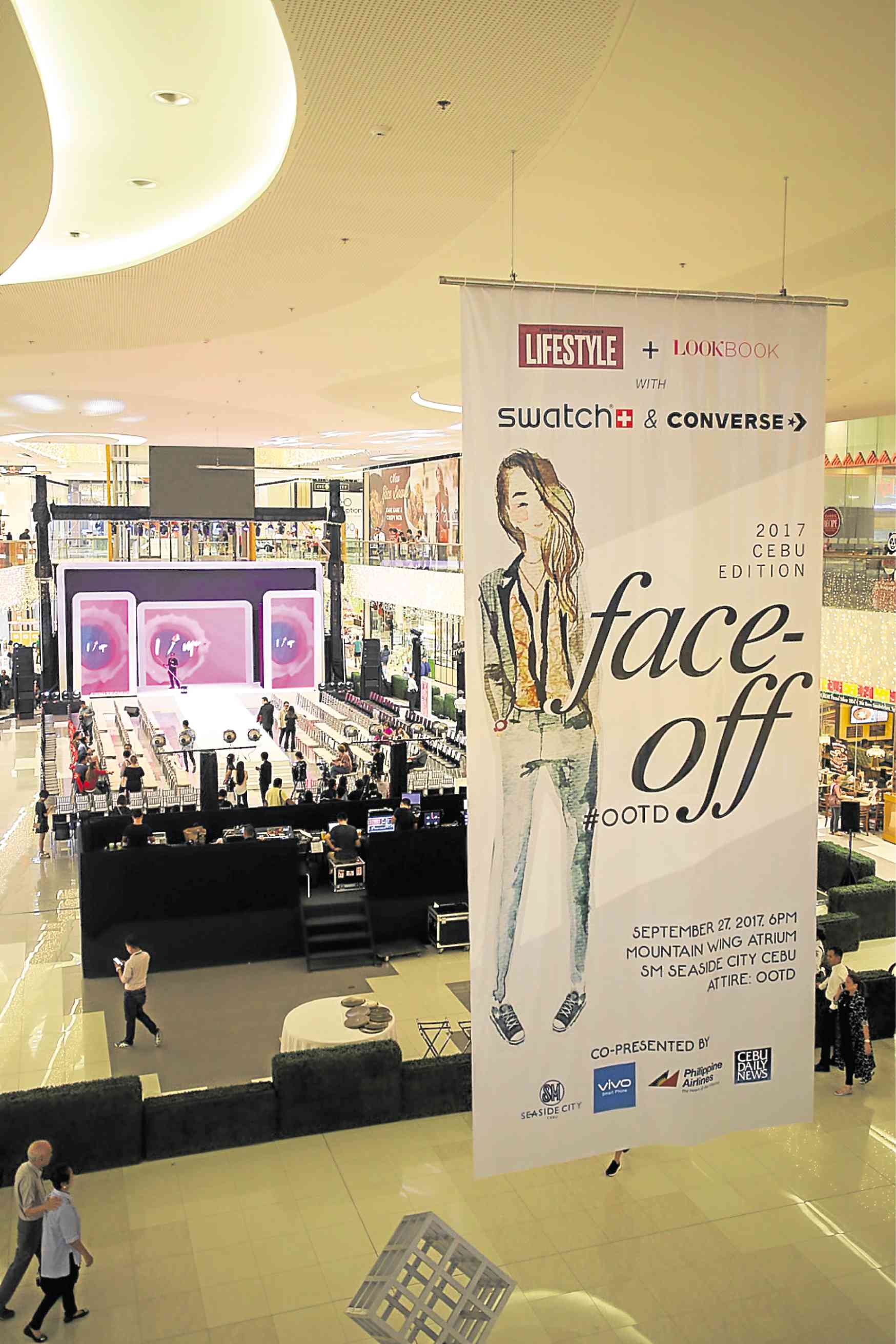 Cebuanos get a kick out of ‘Face-Off: #OOTD’

Inquirer Lifestyle and LOOKbook brought the ninth edition of its banner event, “Face-Off,” to Cebu, and the Queen City of the South truly made it its own.

Coming on the heels of last March’s successful presentation in Manila, 2017 “Face-Off: #OOTD” Cebu edition brought onstage 16 of Cebu’s finest designers and their muses at the SM Seaside City Cebu last Sept. 27, for their interpretation of the no-theme theme that plays on the selfie generation’s individualist styles, as captured in their outfit of the day posts on Instagram.

The designers incorporated in their looks sneakers from Converse—the iconic Chuck Taylor All Star or #whitechucks—and the Swatch x You from Swatch, the event’s copresenters. Swatch even rolled out a limited-edition watch loop that features a Cebu icon (but more on that later).

Swatch flew in Luis Manzano and Matteo Guidicelli to host—à la Derek and Hansel of “Zoolander,” strutting on the catwalk in their Philip Rodriguez suits, Manzano armed with a selfie stick and a Vivo phone (also a sponsor), and playfully fanny-grabbing each other in the process, to the delight of the guests and mallgoers.

Guidicelli, who’s from Cebu—mother Glenna is from the prominent Fernan clan—later told the audience he was “so embarrassed” by their stunt, but it only seemed to thrill the crowd even more as they screamed the young actor’s name.

Like in the first “Face-Off: #OOTD” show, the Cebuano designers—some of whom were also part of the Manila event—surprised with their inspired takes on the #OOTD (outfit of the day, if you have to ask).

Rodriguez, for instance, sent out two romantic looks—ruffles and floral appliques in red, black and white (think notes of Gucci)—paired with white Chuck Taylors. His male model’s black blazer also sported some embroidery, and he was also shod in #whitechucks.

Edwin Ao’s avant-garde aesthetic came through in his capsule collection, with deconstructed menswear—including that of his female muse in a three-piece number with trousers and vest made of indigenous fabric.

Mia Arcenas, who walked the runway in the Manila edition, put on her designer hat in her hometown, for sexy resort wear that proved white sneakers go with anything.

Jun Escario worked on denim for his male models, and designed a white feathered, dotted organza top for his lone female muse.

Rei Escario, Inquirer LOOK of Style winner, dressed his muses in easy, off-shoulder dresses, which he said will be part of his soon-to-launch online collection.

Jul Oliva celebrated both design and diversity in her capsule collection that consisted of her signature fabric manipulation: two of her muses were plus size, including her sibling, lawyer and LGBT advocate Regal Oliva.

As a surprise finale, hosts and Swatch ambassadors Manzano and Guidicelli returned onstage, this time dressed as “Staff” and “Security” carrying a big white banner skewered in a bamboo stick: it bore the image of a lechon and the word “Cebu” underneath it.

It’s the design of the limited-edition watch loop of Swatch from its new Swatch x You collection, which allows customers to customize their own watch from a selection of strap and loop designs.

At this point, waiters went around passing plates of lechon to the delighted guests.