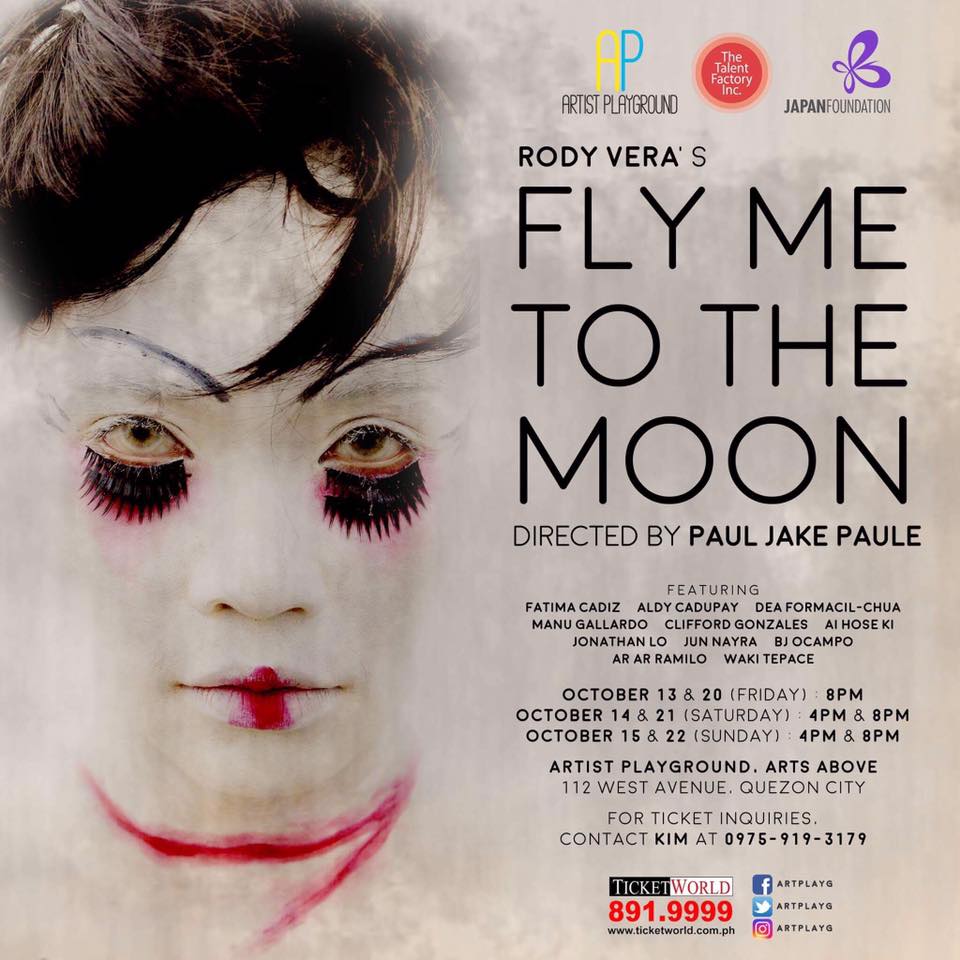 After 13 years, Rody Vera’s ‘Fly Me to the Moon’ makes its PH debut 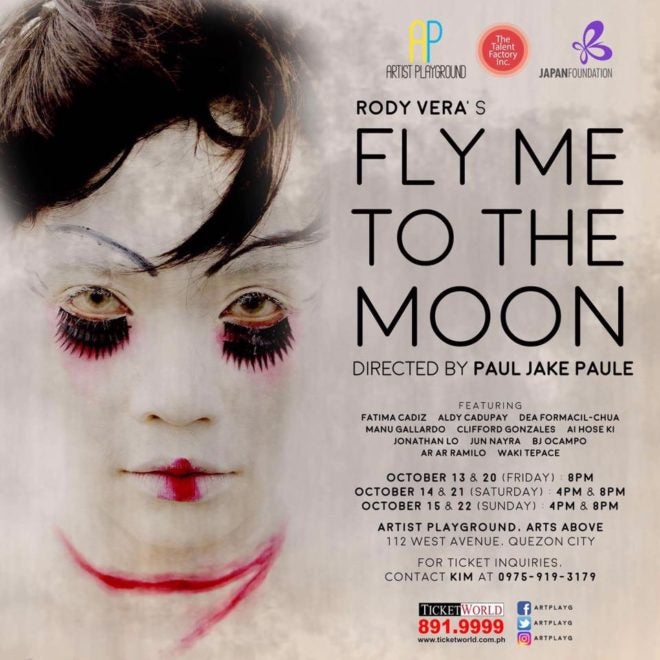 “A play written more than a decade ago and staged abroad but never on Philippine soil.”

That’s how playwright Rody Vera describes his work, “Fly Me to the Moon,” which had its world premiere in 2004 at Setagaya Public Theatre in Tokyo as part of the three-year (2003-2005) Asian collaboration project, performed by artists from the Philippines, Malaysia, Japan, Thailand, Singapore and Indonesia.

After 13 years, the play finally makes its debut on a local stage, with the theater group Artist Playground running it at the company’s newest venue, Arts Above, at 112 West Avenue in Quezon City, until Oct. 22.

“Fly Me to the Moon” tells the story of Melanie, a gay transvestite singer, and his journey to Japan aboard a ship full of sexually charged male crew members. On the ship, Melanie meets Jo, a karayuki-san (Japanese prostitute) longing for a man named Ibrahim, and soon they discover similarities in their lives.

For its Philippine premiere, “Fly Me to the Moon’s” cast members include Aldy Cadupay, Ai Hose Ki and Waki Tepace alternating as Melanie; Fatima Cadiz and Dea Formacil-Chua alternating as Jo the karayuki-san, Manu Gallardo and Jun Nayra as the Captain; and Clifford Gonzales, BJ Ocampo and Ar ar Ramilo as Ibrahim.

What makes this new version different from the Tokyo run was that the original 15-minute one-act play Vera wrote has been expanded by Artist Playground into an hour-long version.

The staging of “Fly Me to the Moon” immediately follows Artist Playground’s recently concluded second run of Vera’s “Happiness Is A Pearl,” which, along with last year’s staging, logged in about 60 shows.

Paul Jake Paule, director of both plays, recalls that after Vera saw their version of “Happiness Is A Pearl,” the playwright also gave them “Fly Me To The Moon.”

“‘Happiness Is A Pearl’ is like a preparation for ‘Fly Me to the Moon,” says Paule. “Both plays have [themes of] universality and individuality… And sa katulad kong baguhan sa pagdidirek, hindi ka makukulong sa script kasi maraming magagandang images palagi si Sir Rody sa mga sinusulat niya, kaya mas makakapag-explore and think out-of-the-box ka (For newbie directors like me, Rody Vera’s writing and imagery allows you to explore and think out of the box).”

The staging of “Fly Me to the Moon” may be seen as an extended celebration of a big year for Vera. In this year’s Carlos Palanca Memorial Awards for Literature, he won second prize for “Indigo Child” in the one-act play in Filipino, and first prize for “Ang Aking Juan Luna” in the Filipino scriptwriting category.

Those victories are on top of his Palanca Hall of Fame designation, for having won five first prizes previously.

But Vera says the awards are just icing on the cake. The real reward is in the act of writing, he says: “Wala pa akong sinali sa Palanca na sinulat ko para lang sa Palanca. Commissioned ito madalas para sa production, pelikula o dula (I’ve not submitted an entry to the Palanca that was written for the contest. Most of my works were commissioned for film or the stage).”

“Indigo Child,” first staged last year, had a two-weekend sold-out rerun in last month’s “Pista Rizalina,” a festival of martial law-themed plays at the Cultural Center of the Philippines.

Vera was in the cast of the recent UP Playwrights Theatre season opener, “Mga Ama/Mga Anak,” an adaptation of Nick Joaquin’s “Fathers and Sons.” And this year, his “Tatlong Dula, Adaptasyon,” an anthology of his previously staged works, was released by the UST Press. It includes “D’ Wonder Twins of Boac,” an adaptation of Shakespeare’s “Twelfth Night”; “Tatlong Mariya,” adapted from Anton Chekhov’s “Three Sisters”; and “Arbol De Fuego,” from Chekhov’s “The Cherry Orchard.”