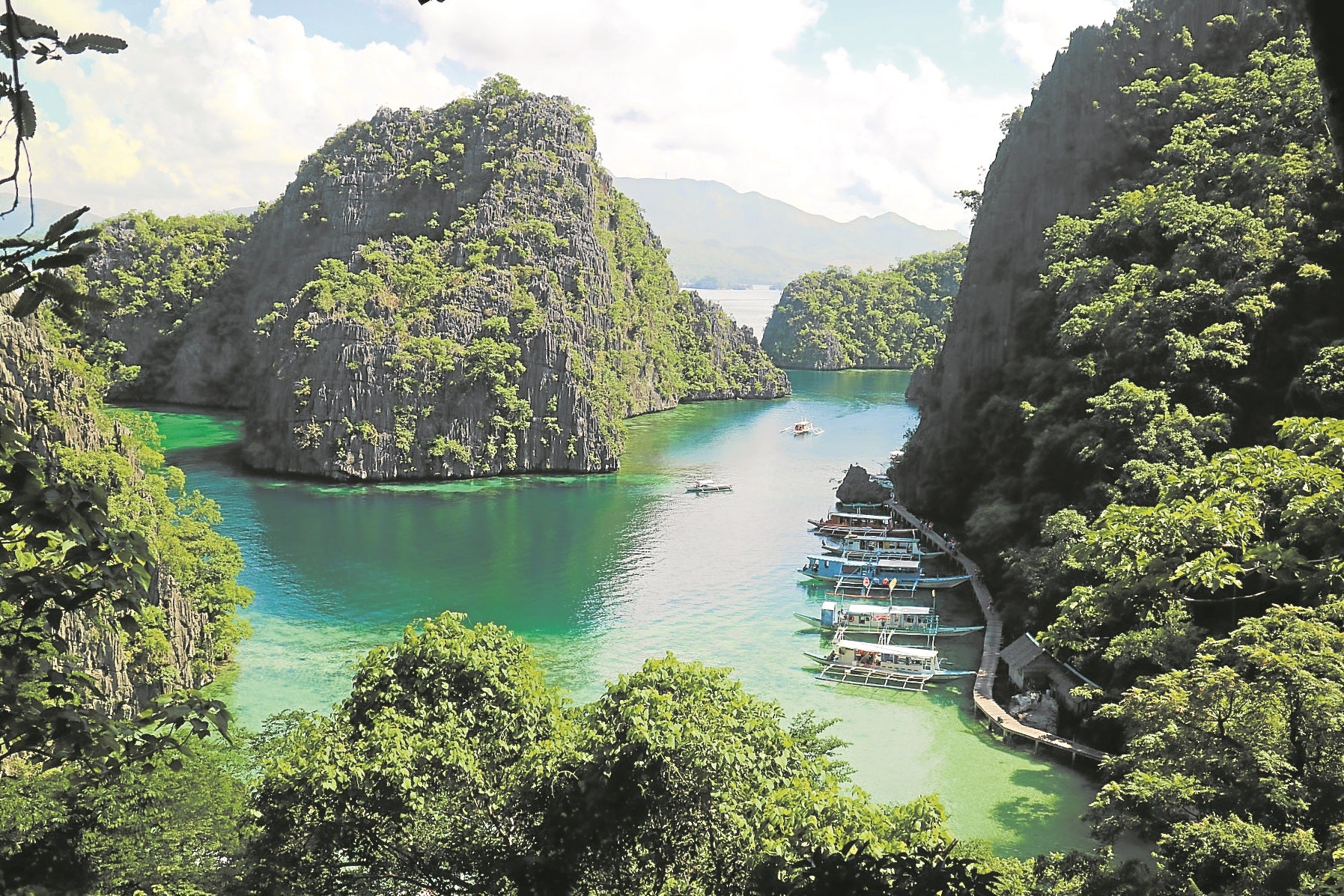 Why Coron is the next big thing in Philippine travel

You probably must have heard that song rendered in a folksy beat on a popular travel show on TV.

The singer-composer himself, Jonel Vergara, guided us on a tour of Coron recently, and for two days let us experience every activity and scenery enumerated in the song—from watching the sunset on the peak of Mt. Tapyas to eating cashew nuts on the roadside.

This jewel in northern Palawan, one of the province’s top destinations, is reportedly surpassing in tourist arrivals the capital city of Puerto Princesa, which boasts the Unesco-listed Subterranean River.

The Coron Natural Biotic Area is listed in the Natural category of the Unesco World Heritage Tentative List.

At the approach to Francisco B. Reyes Airport (named after the Coron mayor who donated the land for the airport complex), one is struck by the number of islands dotting the sea; coral reefs visible through crystal-clear water; rolling landscape and red soil; fields more verdant, the rice leaf a deeper green.

There are two Corons—the first-class municipality occupying 2/3 of the island of Busuanga, the largest in the Calamian archipelago; and the island, 20 minutes away by motorboat, the third largest. The town is the commercial capital of the Calamianes. The island is the ancestral domain of the Tagbanua.

Vergara says Coron is a much better bargain than other niche tourist destinations where activities and sceneries are limited and you’d feel you have your fill after two to three days of stay. With Coron and environs, it seems you can’t have enough of them.

Also, if you’re Manila-based, it is nearer than other exotic island destinations—and cheaper, too.

Several Boracay establishments have recently opened in Coron, reveals Vergara. And its upmarket venues are cheaper than comparable accommodations on Boracay.

Visitors ranging from Orientals to Caucasians to domestic tourists swarm the town especially at around Aug. 28 when it celebrates its patron St. Augustine.

An afternoon tour of the town covers Lualhati Park, the reclamation area with dockyard and marketplace, the plaza, a souvenir shop, a kasuy factory, St. Augustine Church on sloping grounds, Maquinit Hot Spring, and, finally, the conquest of Mt. Tapyas.

The grassy peak is topped with a whitewashed giant cross and letters spelling “Coron,” lit at night. Tourists flock here to see the sunset, the town layout below, the neighboring islands.

But you have to be physically fit because, though it may be a gradual climb trekking along backways and low hills, you have to take 721 steps to the view deck.

On the hazy horizon is Coron Island, surrounded by numerous islets.

It is “70 percent cliffs and rock formations of Permian limestone of Jurassic origin, 25 percent rolling hills, and five percent relatively flat.” Visitors are guided to its interior via a catwalk of wood planks running along rock wall, which also serves as wharf for incoming boats.

Here live the Tagbanua, Palawan’s indigenous people. They are thought to be descended from the Tabon Man, making them “one of the original inhabitants of the Philippines.”

When Magellan docked for provisions in Palawan in 1521, Pigafetta recorded their way of life, including their practice of blood compact, cockfighting, farm and hunting implements, brass jewelry.

A later Spanish exploration noted the friendliness of the tribe living on Busuanga and the ferocity of that on Coron.

They had their own language and religion, arts and crafts, musical instruments, dances, family structure, economic activities, pantheon of gods, rites and rituals.

Most have been Christianized after the aggressive evangelization in the 1950s.

In 1998, the Tagbanua of Coron were granted the Certificate of Ancestral Domain title, the right to manage the island and surrounding fishing grounds, thus winning “the first ever ancestral waters claim.”

Visitors are amazed at how this place has been properly kept, managed and maintained. You won’t see coconut trees around, or any fruit-bearing tree like mango, as their planting is prohibited since anything not native to the island may be an invasive species.

Tribal chieftain Rodolfo Aguilar and his council of elders strictly implements rules and regulations for visitors. As soon as you enter the area, no smoking is allowed.

On the way to Kayangan Lake, one of 11 on the island, you can’t enter if you have no safety jacket as you’re not allowed to swim here if you’re not wearing one.

After climbing 153 steep steps to the top of a ridge—where tourists are queuing up for selfies and group pictures with the famous cove below as background (the official face of Coron, often seen in travel magazines and postcards)—you descend 170 steps to what is considered the cleanest lake in Asia.

The swimmers can’t have enough of the view and the water—the karst of towering limestone cliffs, ridges, fissures; and translucent fishes swimming beside you.

More adventurous swimmers would go to Atuayan Beach or CYC Beach to snorkel or do some kayaking. Or to reef dive sites like Malwawey Reef to swim among sea creatures in the the coral gardens. (Underwater visibility is up to 24 meters.)

Or to Skeleton Wreck, one of 10 wrecks of Japanese gunboats sunken during the war, which made Coron’s reputation as the Shipwreck Capital of the Philippines. Views in these dive sites are listed on Forbes Traveler’s Top 10 scuba-diving sites in the world.

A more amazing sight is the Twin Lagoons. As the boat slowly plies the longer route to avoid disturbing the corals with its propeller, the tourists gape and gawk at the labyrinth of megalithic rock formations jutting out of the water.

If you have an extra day to spend, book for the Calauit Safari Tour. After 2 ½ hours drive from Coron town proper to the docking area in Busuanga town, it’s just a 10-minute boat ride to the wildlife sanctuary of Calauit Island.

Before returning to Manila, a must is a visit to the souvenir shops of Coron. Here are authentic Tagbanua handicrafts, ethnic basketry, necklaces of beads and stones and bracelets of shark bone, woodcarvings of animal forms incised with ethnic patterns.

Here are South Sea pearls of exquisite hues ranging from peach to gold to copper to cerulean. A pair of earrings of cultured black pearls is P300 (though a pair of natural pearls set in gold can go as high as P56,000).

Those with more earthy inclinations could explore the markets and get their fill of kasuy, fresh produce from the sea, and dried fishes from all parts of Palawan.

Recently, controversy erupted over the planned development of a Nickelodeon undersea theme park and resort in the area.

The tourism secretary said she was getting “excited” over the project. Environmentalists said it posed a serious threat to the marine ecosystem, endangering Coron’s inclusion on the Unesco World Heritage List.

It would have featured a floating hotel, condominiums, restaurants, lounges six meters below sea level—and we would have been seeing SpongeBob, Mr. Krabs, Squidward and Ninja turtles swimming with the clownfish among the table corals.

In late August, Nickelodeon Palawan was reportedly axed because of the outcry.

Visit Coron now before it can be spoiled in any way—one more heritage site coveted by those destroyers of lovely things.