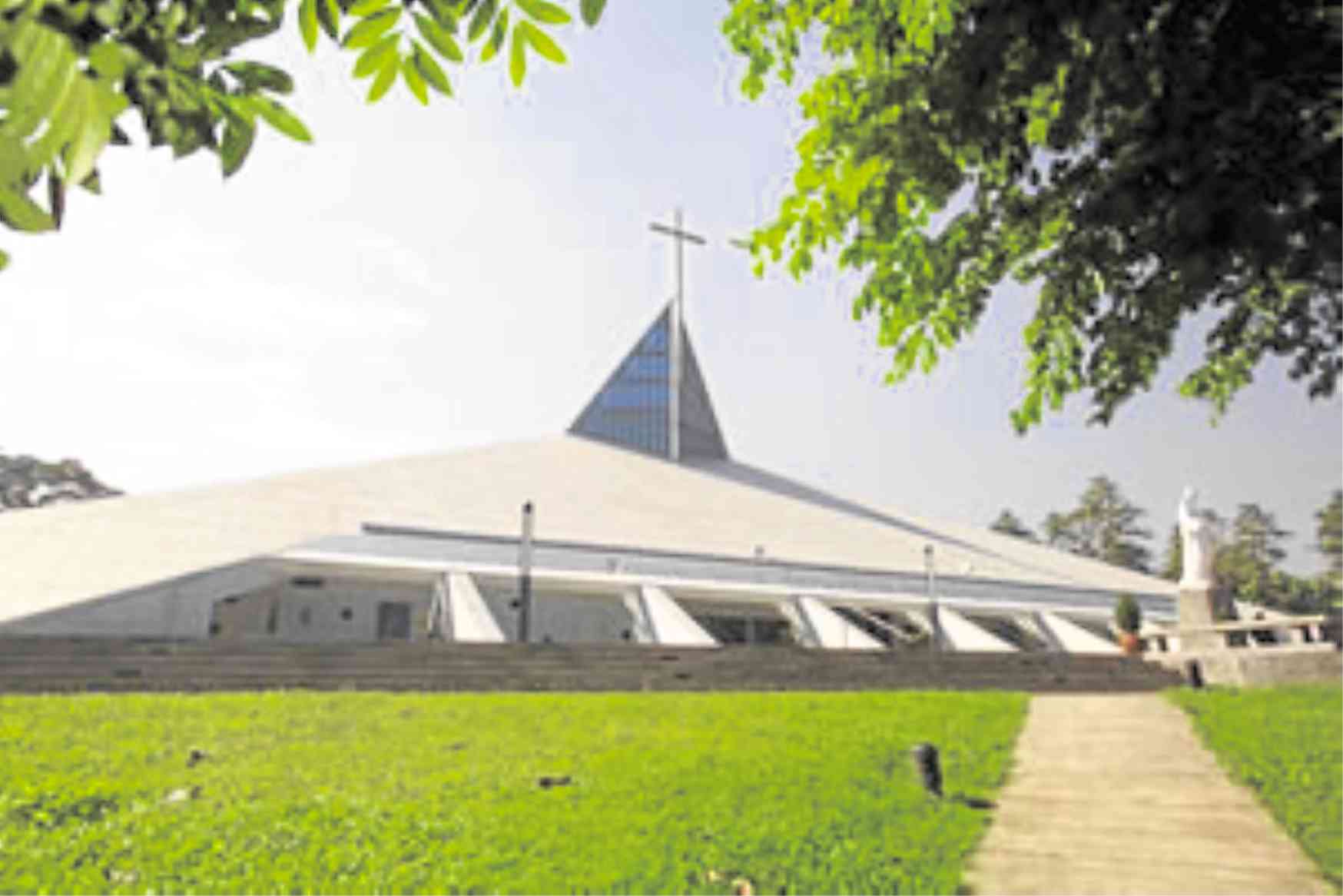 The Church of the Gesu stands as a religious icon that embodies the ideals of the Ateneo de Manila University.

Ateneo’s Church of the Gesu now a Filipino symbol

Every few years or so, celebrity Kris Aquino, her equally famous brother and former President Noynoy, tycoon Manny Pangilinan, business leader Josephine Yap, sports icon Chris Tiu and a host of other graduates are invited to recapture the ideals of their Ateneo de Manila University education through a batch reunion. More often than not, the events begin with a Mass at the Church of the Gesu, a 15-year-old landmark of the school.

In this chapel described by a writer as a “giant triangle anchored to the ground and rising to a pinnacle,” reflective homilies combined with soul-searching melodies easily stir many to revisit aspirations and longings—both current and from decades past—and to reconcile them with present realities.

The Church of the Gesu, nevertheless, is a place of worship and self-examination not only for the alumni but also for the Jesuits, administrators, faculty, students and nearby residents who visit it.

Envisioned to be the symbol of the community it gathers, the strikingly modern structure was recently acclaimed by the National Commission for Culture and the Arts (NCCA) as an expression of the collective Ateneo mission and also of the spirit of the entire Filipino people.

By conferring the Church of the Gesu the first “Haligi ng Dangal” award, the NCCA’s National Committee on Architecture and Allied Arts hopes to inspire a new generation of designers to create works that “express and further Filipino Identity,” explains Gerard Lico, NCCA project director.

Lico, who is also author of “Arkitekturang Filipino: A History of Architecture and Urbanism in the Philippines,” explains that the Haligi ng Dangal recognizes recent works “created by Filipinos for Filipinos today.”

Interestingly, the Gesu’s architect, Jose Pedro “Bong” C. Recio, a product of the University of Santo Tomas, who also had a stint in Hong Kong, would not have the key words “Filipino” or “nationalistic” in descriptions of his landmark works.

These include the asymmetric bastion of British presence in the Philippines along C-5 in McKinley Hill, and the Oratory of St. Francis Xavier in the leading edge campus of Xavier School in Nuvali, Laguna. The latter, in this author’s imagination, takes the form of a toddler’s shape sorter toy given the multisided Nuvali chapel’s irregularly shaped windows.

Recio’s architecture is best described as engaging and captivating yet highly functional to contemporary audiences. His design sense has been greatly influenced by decades of practice in cosmopolitan Hong Kong, peaking during the building boom era of the ’90s.

He began by working for local firms there in the ’70s and moving on to bigger multinational design firms which facilitated his collaborations with well-seasoned teams on projects in Hong Kong, Singapore and Bangkok.

From a previous partnership, he has moved to forming his own successful architectural and design firm.

Like many Filipinos in Hong Kong and elsewhere in the world, Recio has adapted his style and work ethic to suit world-class audiences. Yet in manner, affability and essence, he has remained close to his Filipino roots. He is what could be called today a global Filipino, and the Church of the Gesu could be described the same way.

In its description of the Church of the Gesu, the National Committee on Architecture observes how the structure “evokes the qualities of the traditional bahay kubo—openness, transparency, multifunctionality and harmony with the environment—within the envelope of a modern, contemporary Filipino structure.”

From the entrance, the visitor’s gaze is drawn to the apex of the triangular ceiling that allows daylight to stream in and draws the eye down to the celebrant of the Holy Mass.

At the same time, “the ends of the roof dip down to form what seem like arms extended (to the churchgoer) in welcome,” according to an architecture expert.

At a recent celebration of St. Ignatius Loyola’s feast day at the Gesu and the 15th anniversary of the church dedication, Recio, with many from his Ateneo high school batch of 1970, gave thanks for the honor bestowed on the church by the NCCA.

The Mass concelebrated by over a dozen Jesuits was a moving experience—intimate at the same time uplifting and awe-inspiring. It made real the vision of the NCCA to promote architecture as a form of profound expression.

The NCCA’s Lico summed up the role of Filipino architecture today as “a quest in finding our identity through built space, by translating the narrative of our nation into structure—by distilling indigenous forms, philosophies and techniques with modern technologies and sentiments, and arriving at a distinct design that responds specifically to our content and culture.”

As such, the Gesu has gone beyond being simply an icon of the Ateneo, to being the representation of a people maturing in confidence and global perspective. —CONTRIBUTED