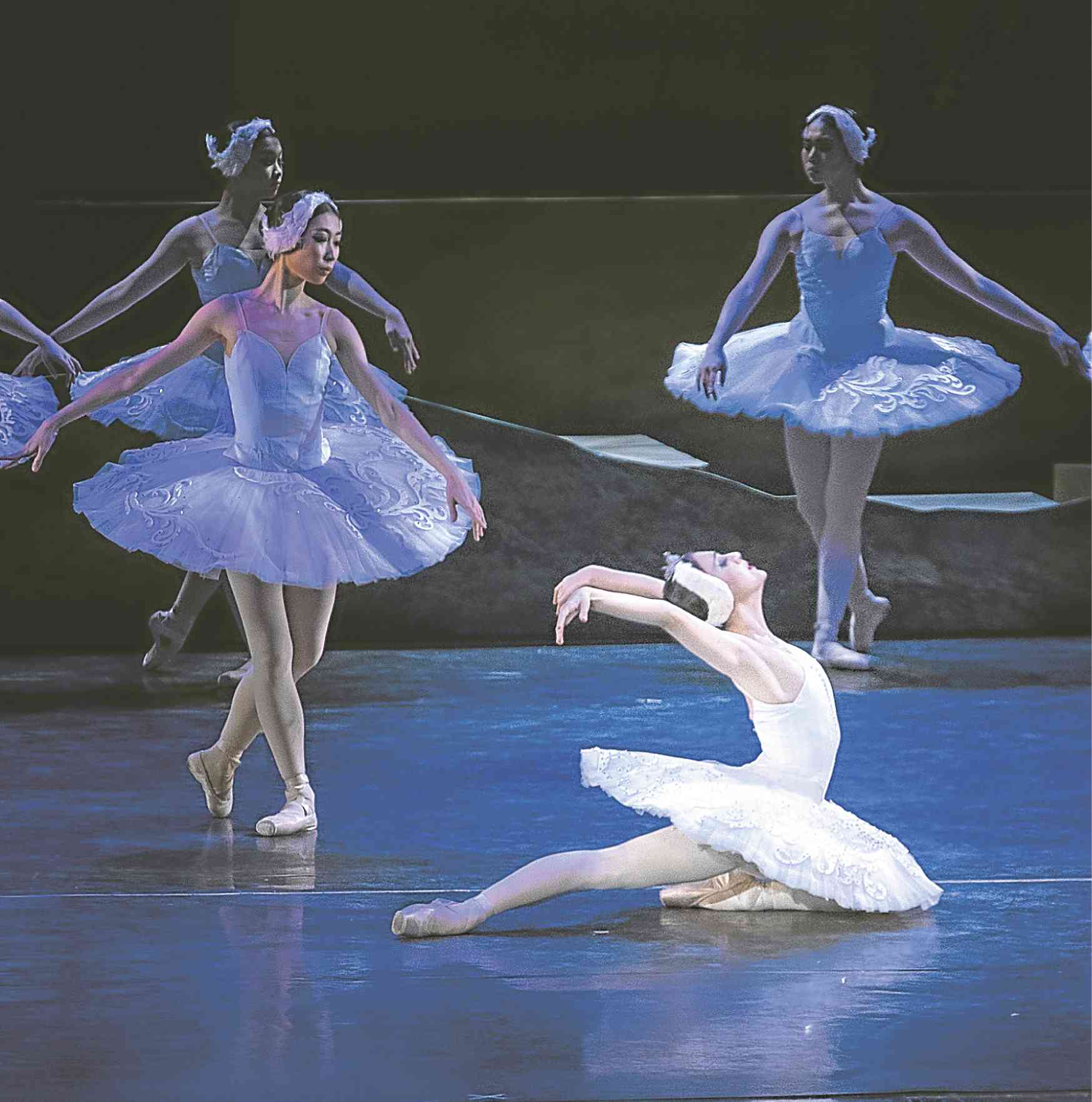 Barkman as the vulnerable Odette, the Swan Queen —PHOTOS BY G-NIE ARAMBULO

The production was a spectacle with a clear character arc defined by principal Katherine Barkman; the corps de ballet was a vision of symmetry.

Filipinos have always loved the romantic story and “Swan Lake” has always been a staple in any ballet company’s repertoire. BM imported a Russian conductor to do justice to Tchaikovsky’s colorful score.

With “Swan Lake,” BM showed again its formidable technique. Truly BM has a mine of dancers imbued with the signature Russian style. But the dancers should deepen its art by focusing on more creative interpretation. Technique or doing things perfectly is only a tool to unleash instincts or emotions.

As Odette, the Swan Queen, 20-year-old Barkman highlighted her natural lyricism with elastic phrasing, expressive thrusting of the shoulders, and fluid arms that contrasted the sharp kicks.

She made the music ooze out of her sinewy muscles. Every gesture had an intent that made the audience empathize with her haunted fragility.

The most anticipated part in the Black Swan pas de deux is the 32 fouettés—the storm of 32 whipped turns. The ballerina turns on one leg 32 times while the other leg lashes out to the side like a whirlwind.

The challenge is to show control by dancing one spot and keeping time with music.

Most ballerinas doing Odile lash out fouettés just to service the choreography. Instead of brandishing bravura, Barkman attempted to make all the difficult turns in this section as dramatic ploys to mesmerize the Prince.

The first half of her fouetté series was a tirade of single and double pirouettes to taunt the Prince. In the second half, she wisely focused on staying with the music.

Although she had the right mix of malice, full attack and seething power, there were still clichéd affectations that we had seen from other famous ballerinas.

Guest artist Joseph Philips made a suitable partner for Barkman as both had a similar build. He made the soaring leaps, the smooth pirouettes and the picture-perfect lines, but he somehow lacked stage presence.

Philips, however, was able to express his love through seamless and attentive partnering that created a shared intimacy.
But the ending was anticlimactic—Barkman’s awkward climb onto his leg instead of a soaring overhead lifts that should have expressed consummation.

In the pas de trois (a peasant dance for a trio to show off both lyricism and bravura), Korean guest artist Heewon Cho stood out for her precision, speed and her lush use of the long limbs.

It’s in the details

Despite the glamorous production, there was a need for focus in some scenes.

As the Prince went to the glades to hunt, a cutout swan floated across the lake.

Unless one were familiar with the story, one wouldn’t make the connection that the swan turned into Odette at night. There was no clear design element that visually connected the swan to the ballerina.

During the Prince’s birthday party in Act 3, a highlight was the suite of dances from different countries. However, in this production, the Spanish, Neapolitan, mazurka and Hungarian dances were nondescript, lacking in the distinctive country’s style and the spunk.

If it weren’t for the costumes and the music, we couldn’t tell one dance from the other.

Narrative transitions between dances were lacking. In the old version of “Swan Lake,” Rothbart arrived with Odile and suddenly danced with the Spanish group for no apparent reason. But today’s audience should see a clear motivation or gesture on why he did that.

The corps of swans was a vision of flight and enigma in the Act 2 lakeside scene in which the Prince met the swans. But the feeling wasn’t sustained as they went out of character on the final scene.

The program notes said: “Odette and the swan maidens have given up all hope of rescue.” We just saw well-rehearsed, pretty girls in white fluttering their arms instead of heartbroken birds.

As the sorcerer Von Rothbart, Alfren Salgado exuded a commanding stage presence. But his portrayal of the character bordered on stereotype.

Most companies should think of how to turn a warhorse like “Swan Lake” into something less predictable. A well-loved classic transcends technique and needs a refreshing perspective. —CONTRIBUTED