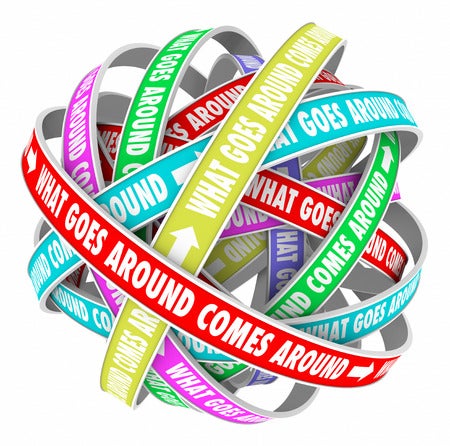 Almost everybody must have heard of the word karma, and may have even used it in conversations. “Karma” was even made into a successful movie in 1981 starring Vilma Santos.

But how many know what karma really means? It may mean different things to different people. And no two persons will agree on what it means.

One common mistake is to use the expression, “Ma-karma ka sana!” Why is this a wrong use of the word?

Karma comes from the Sanskrit word which means action. Action usually refers to physical activity. But it can also refer to mental activity such as desires, intentions or goals. And before something occurs on the physical plane, it must be thought of or must exist as an idea. Thus, mental action can become as important in incurring karmic repercussions as physical acts.

Perhaps this is what Jesus Christ meant when he said in Matthew 5:27: “You have heard it said, ‘Thou shalt not commit adultery,’ but I say to you, whoever looks at a woman with lust had already committed adultery with her in his heart.”

Karma is often regarded by the average person as a moral law, that is, referring to action as either good or bad. Or sometimes as reward or punishment.

I tend, however, to regard karma more as a natural physical law rather than a moral law.

In Galatians 6:7, it says: “Whatsoever a man soweth, that shall he also reap.” In other words, “What you plant, you harvest.” This is similar to the Physical Law of Cause and Effect, which states that “Whatever you do will come back to you, nothing more and nothing less.” For example, a man who tortured prisoners by blinding them was born blind in the present lifetime.

The American psychic and prophet, Edgar Cayce, who died in 1945, believed that karma was merely a consequence of actions done in the past. He said that karma was simply “meeting one’s self.” We could meet the consequences of our actions not only in this lifetime but also in the next life.

Karma, therefore, is more akin to a natural physical law rather than to a moral law of reward and punishment.

To illustrate this point: Suppose I am holding a stone and I let go of the stone. The stone falls to the ground not because it is being punished but because gravity pulls it down.

Another physical law that may be likened to karma is the third law of motion of Isaac Newton, which says: “For every action, there is an equal and opposite reaction.”

It used to be thought as a universal scientific fact that the shortest distance between two points is a straight line. This is according to Euclidean geometry.

Then a brilliant scientist named Albert Einstein came along and said: “There’s no such thing as a straight line.” Everything in the universe is a curve.

If that is so, everything eventually comes back to where it came from. According to this theory, if you throw a stone into the air and if there’s nothing at all that would impede or obstruct its progress in space, that stone will eventually return to your hand where it originated.

This is how I understand the Law of Karma—there’s no escaping it. Everything we do will come back to us, nothing less and nothing more—whether we believe it or not.

So, to say “Ma-karma ka sana” is wrong because karma will take place, whether we believe it or not, or whether we like it or not.