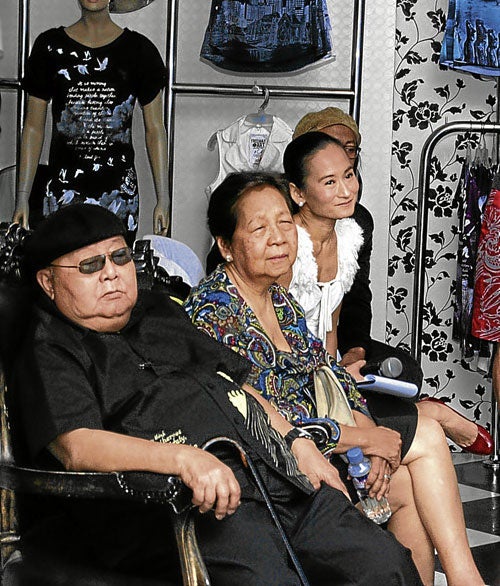 And, almost instantly, fans of the National Artist for Literature who had been waiting at The Row in Glorietta 5 tried to edge their way to his side to have pictures taken with him. Yeah, exactly like a rock star.

José’s unapologetic way with words is probably the source of his charm—yet it matters to him not whether he attracts the attention of many, as his heart belongs to his wife Teresita only.

To the delight of those present, actress Cherie Gil and all-around artist Lourd Ernest de Veyra took one impassioned turn after another in reading excerpts from the National Artist’s choice works as part of a tertulia, which has been a regular part of Freeway’s literary events.

Gil read from “The Pretenders” and “Ermita” while De Veyra from “Tree” and “The God Stealer,” after which prima ballerina Lisa Macuja-Elizalde, the host of the night, asked questions, to which José answered in his own outspoken manner.

José revealed his admiration for both Ramon Magsaysay, the former Philippine president, and national hero José Rizal, whose 150th birth anniversary will be marked this year. 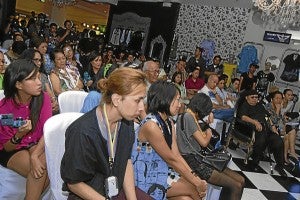 As for the current administration, José said that while he didn’t know President Noynoy Aquino, he knew the late Sen. Benigno “Ninoy” Aquino, whom he described as having more courage than he had.

José was also asked who he thought should and should not be National Artist, to which he replied: “It is very difficult to be a writer, as you cannot make money. Sometimes, you have to take odd jobs like being a copy writer or in advertising. It takes a lot of integrity. So it is very disheartening to see a third-rate moviemaker be considered.”

He also answered why, despite his love for the Philippines, all seven of his children were abroad.

“Because I love my children more… it is hard to make an honest living in the Philippines,” José replied.

And the signature beret? He said he did not wear it for style points but due to the fact that he got cold on his head and even slept at night with headgear on.

But beneath the tough outer shell, his love for Teresita could not be denied. With much pride, José pointed out how she took care of him and how good a cook she was.

Born Dec. 3, 1924, José discovered literature as a public-school student in his hometown of Rosales, Pangasinan. After World War II, he enrolled in University of Santo Tomas but eventually left to pursue writing and journalism. 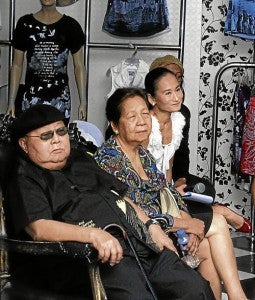 Through the years, José’s natural talent allowed him to work as a staff member for the old Manila Times; edit several publications; put up his own publishing house Solidaridad; and start the Philippine PEN (Poets, Playwrights, Essayists and Novelists), which brings together writers in fellowship and in the defense of freedom of expression.

With Freeway honoring him with a collection based on his body of works, José becomes the first living National Artist to be honored by the clothing brand.

His essays such as “Aphrodisiacs and Affairs,” “Writer into Teacher,” “The Uses of History,” “The Writer as Historian,” “What Filipino Architecture,” “Manila Seven Decades Ago,” “Literature as Memory, as Ethics,” and “February 26, 1986” were used as the germ of the fashion collection which includes graphic tees, modern tailored woven tops, dresses and accessories. “Since it is our first time to honor a living National Artist, I just realized what a privilege it is,” says Sheree Roxas-Chua Gotuaco, CEO of Elite Garments International. “It is truly priceless to hear the opinions and thoughts of F. Sionil José first-hand. It is much more powerful and meaningful without a second interpretation from others, unlike in the past when we just interviewed close family members and friends, asking them of their experiences with the National Artist we were honoring. It is poignant and entertaining, but not as revealing.”

Indeed, José revealed much of himself that night, willingly or not, and, in the case of every opinionated writer, not everybody may agree with him. But perhaps without the need to say it, it is what José wants.

For Filipinos—especially the young ones who are sure to patronize the collection—to start forming their own well-informed point of view and begin to recognize that it takes a certain class to be fashionable and, even more important, a certain pride to be nationalistic.