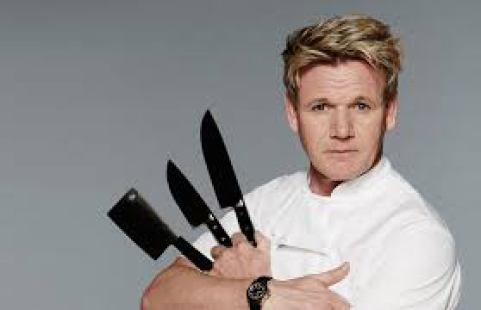 Chef Gordon Ramsay says he’s proud of being ‘a pain’

CANNES, France — Superstar chef Gordon Ramsay revealed the secret of his success Monday, “I am the biggest pain in the ass in the world, because I want the best.”

The British cook said he was a stress junkie who needs to master whatever he does, whether in getting seven Michelin stars for his haute cuisine or sorting out failing restaurants in his television show “Hell’s Kitchen”.

“I need to be at the coalface, I need to be where the heartbeat is, where there is that level of trepidation,” he told the MIPCOM television industry gathering at Cannes on the French Riviera.

“I need to be under pressure because pressure is healthy,” said the chef, who is so famous for his use of the four-letter epithet that one of his shows was called “The F Word”.

Ramsay said had to be at the center of the action when he was dropped into the Colombian jungle to shoot his new documentary, “Gordon Ramsay on Cocaine”, which airs in Britain Thursday.

“They told me they could shoot it all from above but I wanted to go right down onto the ground to understand how big the problem is,” he said.

“I don’t do cocaine,” Ramsay stressed. “I have a brother who is an addict and I lost an amazing young chef to cocaine.”

He said the drug is the restaurant industry’s “dirty little secret”, and that he was once asked by customers to dust cocaine on top of soufflés like icing sugar.

The chef tested bathrooms in some of his own 31 restaurants for the documentary to see if cocaine was snorted in them.

“I swabbed them and they came up positive, not just the customer toilets but the staff ones too.”

He said use of the drug was “out of control” and it “bugs the hell out of me” that there was sometimes almost a light-hearted attitude to it in Britain.

“I don’t want any more casualties (among his staff) and I don’t want to throw them under the bus. I am there to help,” he told delegates.

Ramsay, who once aspired to be a professional footballer, has become a global broadcasting phenomenon with his shows like “Kitchen Nightmares” and “MasterChef” hogging 2,000 hours of screen time in the US alone last year.

Ramsay said he never dreamt that he would end up on TV when he first came to Cannes 25 years ago as the cook on Australian media mogul Reg Grundy’s yacht.

The man behind such shows as “Wheel of Fortune” and “Neighbors” tried to encourage the then  25-year-old “spotty and anemic chef” to try presenting.

“But I wanted to strive for three Michelin stars. The foundations had to be set absorbing from the very best French chefs to understand that level of haute cuisine. For me the challenge has always been to bring things to their absolute best,” he said. /cbb