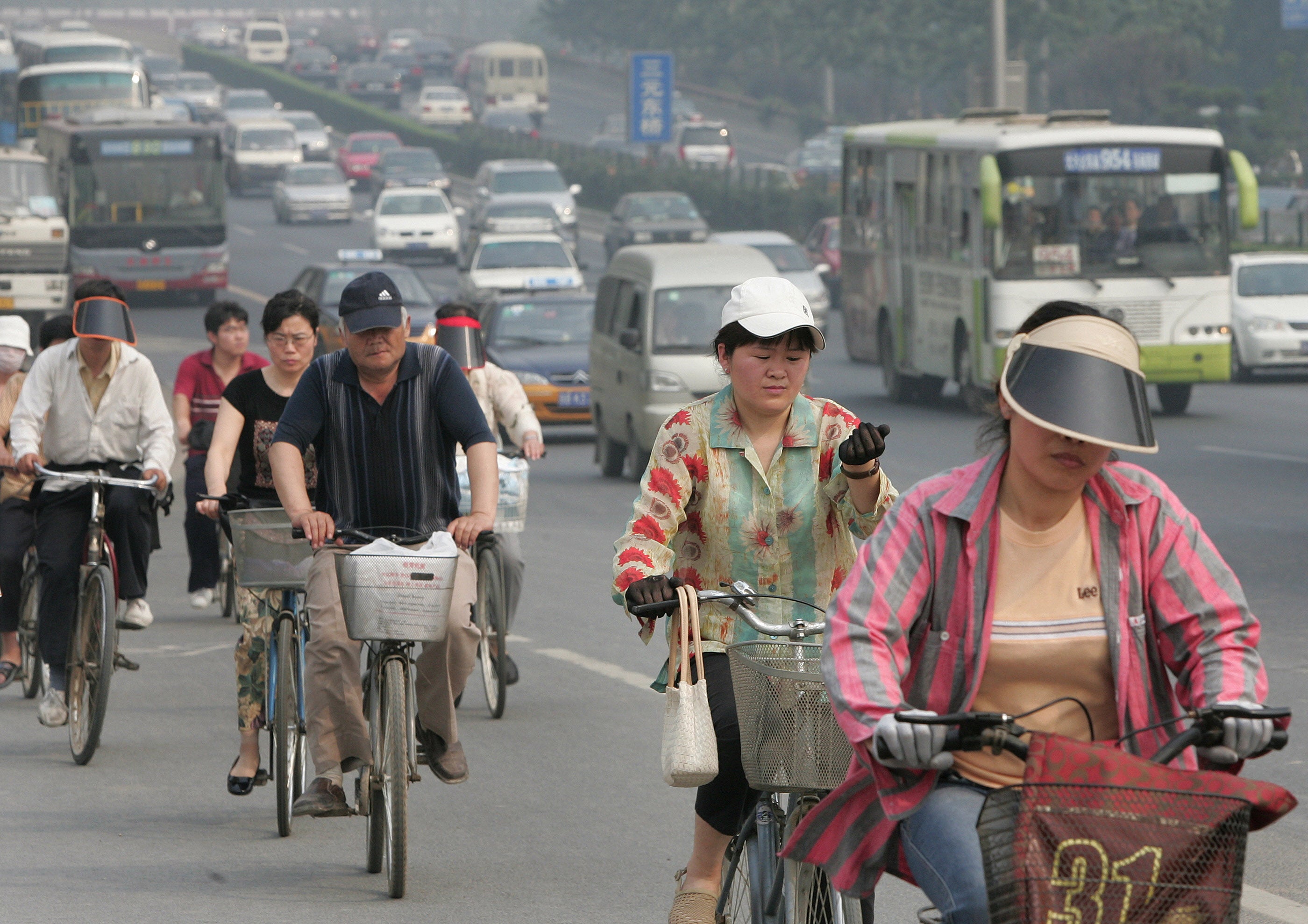 Cyclists and vehicles share a Beijing road, 05 June 2006. Beijing launched its inaugural "no-car day" today to combat the city's worsening pollution woes, but traffic was as grid-locked as ever and the grey air remained dense with exhaust fumes. The pollution caused by motorized vehicles reportedly makes up 30 percent of the air pollution in the Chinese capital, which now has 2.6 million cars, with government estimates that by the time of the 2008 Olympics Beijing roads will have 3.5 million cars. AFP PHOTO/Frederic J. BROWN. / AFP PHOTO / FREDERIC J. BROWN

In Beijing’s heavy traffic, Lin Hongcheng traveled 10 kilometers to meet friends in less than half an hour. Instead of taking a taxi or bus, he rode his 80,000 yuan (US$13,000) bike.

After living in Japan for most of the past 23 years, Lin came back to China with his family three years ago. Now he is a graduate student at the Chinese Academy of Social Sciences — and a lover of road bikes.

As a hobby and a way of exercising, cycling is not as popular in China as it is in Europe or the United States. Only a few thousand people are active in about 10 online cycling groups, according to Lin.

In Beijing, people use the messaging app WeChat to find like-minded bike lovers, regardless of age or gender. Lin said his life has become more fulfilling because of the friends he has made.

For example, his friend Tian Changqing is also a road bike lover. He is 64 years old, and if it weren’t for cycling they might never have become friends.

Tian has diabetes and 10 years ago was in bad shape. He has a picture of himself from that time — lying in bed with a straggly beard, eyes half closed, receiving an intravenous drip.

“I had to take almost 10 types of pills every day and had to inject insulin to survive,” Tian said.Thankfully, he discovered road biking. At first, he could barely manage 10 kilometers per day, but now he bikes around China with friends. He not only improved his health but now enjoys life much more.

“School schedules are tight in China and homework can be stressful for the kids. Parents don’t often support their kids’ hobbies, thinking they are a waste of time,” Lin said.

Chang’an Avenue, a major thoroughfare in Beijing that runs east-to-west between Tian’anmen Square and the Forbidden City, is a popular street for road bike lovers. A wide bike lane goes 12 kilometers through the heart of the city.

Lin said people regularly meet at one end of the path for a group ride.

“I often go at about 7:30 pm, because it’s cooler and the traffic is better,” he said. However, Lin, who rides about 400 kilometers per month, said he and his friends now prefer the separated bike paths near Olympic Park, in the northern part of the city.

Some skilled cyclists like to go fast. Lin said he can ride at 40 km/h in a protected lane and has reached a top speed of 60 km/h on flat routes, which is hard to do in the city.

“The bike lane on Chang’an Avenue is truly wide and flat. However, there are too many tourists who bike slowly without respecting the rules and sometimes even stop for pictures,” Lin said, adding that it can be dangerous for high-speed riding. Scooters and cars on side roads can also be hazards.

In group chats, people share news about riders getting injured, and sometimes killed, when cycling on the street. In early August, a rider shared a video in which a young man on a bike was knocked over and killed by a car. Group chat members mourned the unknown man and raised the safety issue again.

“It seems like car drivers are not aware of how fragile we riders are, so it’s important for us to improve the safety consciousness of drivers and protect ourselves and our bikes,” Lin said.