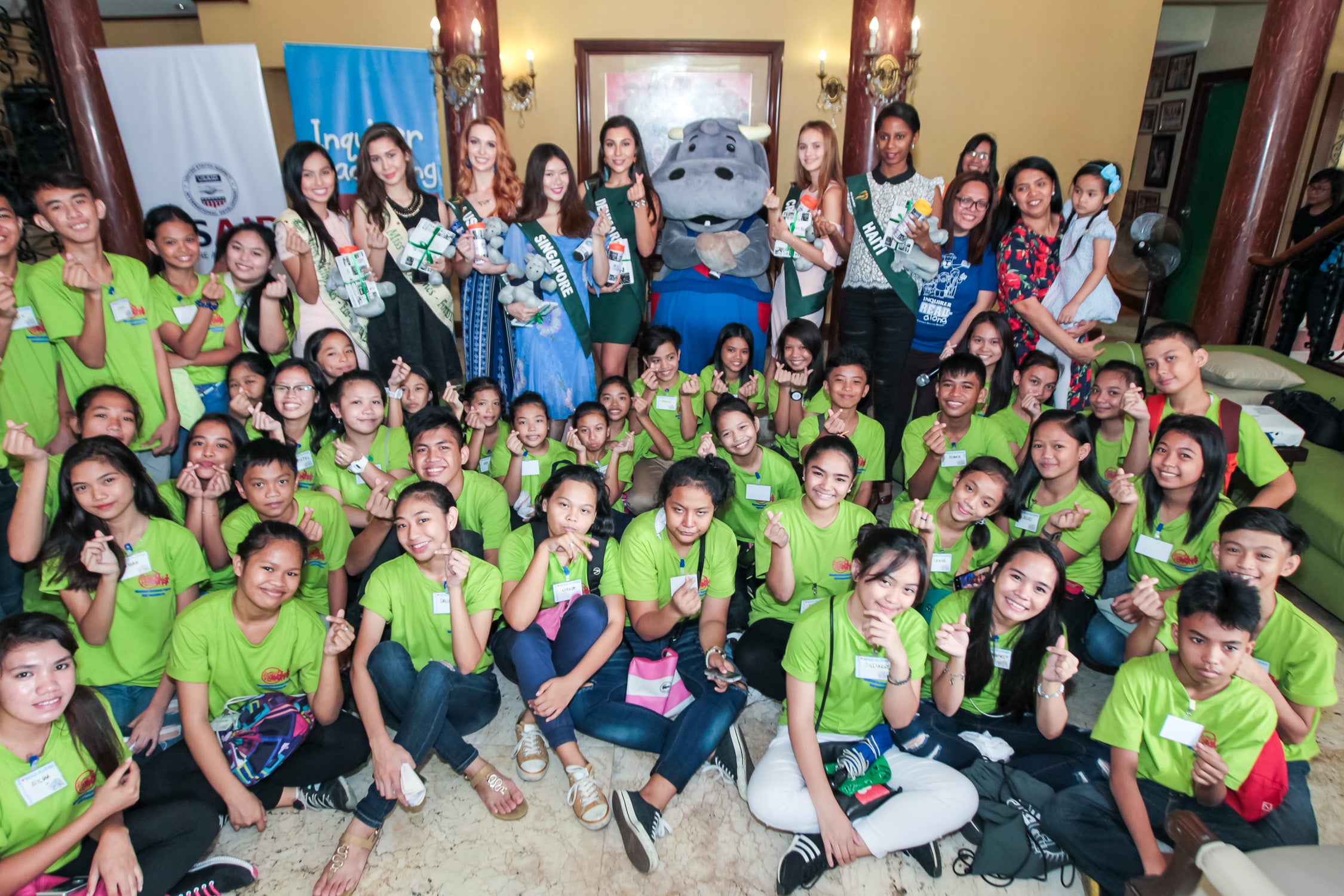 Some 50 children and teenagers from Families and Children for Empowerment and Development Foundation join the Saturday morning session of Inquirer Read-Along at Carousel Productions headquarters in Mandaluyong City with the Miss Earth 2017 candidates. INQUIRER photo / Leo Sabangan II

Never take nature for granted or you might take the brunt of its revenge.

About 50 children and teenagers from Families and Children for Empowerment and Development Foundation (FCEDF) were told of stories on conserving the environment in a special Inquirer Read-Along session featuring some international delegates and local titlists of Miss Earth beauty pageant.

Bautista and Castillo read in tandem Rene Villanueva’s “Si Emang Engkantada at ang Tatlong Haragan,” which is about three brats who, after being casted into a spell by an enchantress for destroying her garden, learn to take care of their surroundings.

The five delegates read “Grandpa Tree” by Bimbo Papasin, a story about a centuries-old acacia tree which saves a village of negligent people from a storm.

Castillo said the three brats in the story should remind children not to take the gift of nature for granted or else we might suffer and regret in the end its loss.

“What happened to the brats was just a spell, but what if it really happened to us? We cannot just return instantly whatever we lost (from nature),” she said.

“If you apply the five Rs in your everyday life, you can make a big impact in preserving our environment,” Bautista said.

Jovanovic attributed the storm that ravaged the village in the story as a reminder to everyone to be considerate in our surroundings.

“In reality, when storms actually hit us there is no turning back, and that’s when we feel the need to take care of the environment so it’s like a wake-up call,” Jovanovic said.

Likewise, Carlberg stressed the importance of respecting the planet. “We don’t want the planet to be a mess because there are major consequences like the increasing global warming which has intensified the storms.”

Amid numerous initiatives globally and locally on saving Mother Earth, the participation of children can still be relevant through their simple acts of conservation like turning off lights when not in use or not throwing garbage elsewhere, Jovanovic said.

“People are doing what others are doing. If one starts to do something better, the second will follow and many others will follow. It’s important to give the message of being the initiator to do better things,” she said.

With all these said, sustaining such acts of environmental concern should be everyone’s goal in the long run, Lee said.

“We must take actions but we must also know how to uphold such actions and eventually adopt them as part of our culture,” Lee said.