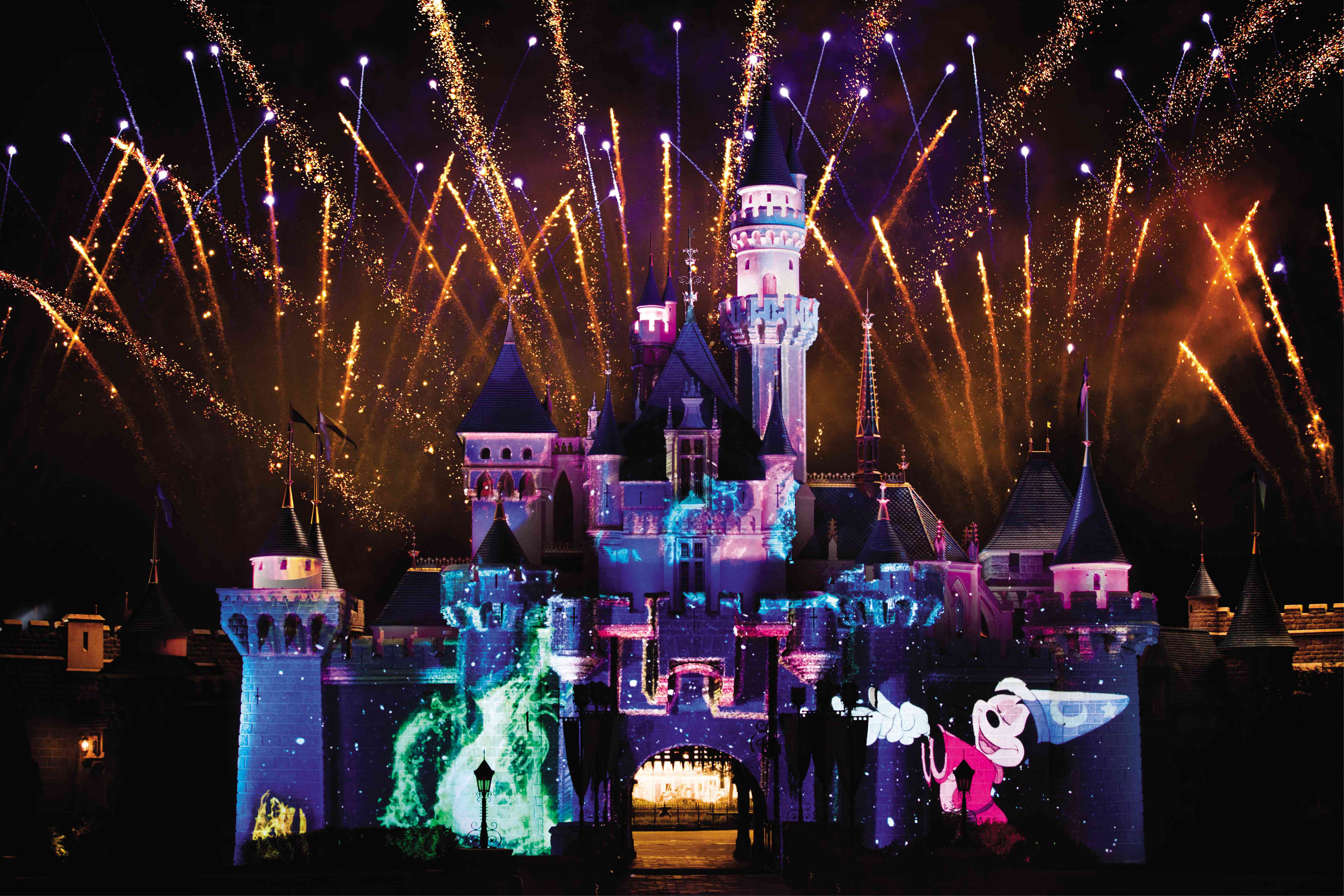 The magical “Disney in the Stars” projection-lights-pyrotechnics show is held 8 p.m. daily. —PHOTO FROM HKDL

Tears were streaming down our face and they couldn’t be stifled. It was just a few minutes into “Disney in the Stars,” a projection, lights and pyrotechnics show at Hong Kong Disneyland (HKDL), and already this Disney theme park virgin was overwhelmed with nostalgia

“It’s so magical talaga!” she replied. We agree, there’s a distinctly Disney magical touch that affected the audience so much that you could hear most everyone’s exultation and awe before, during and after the program.

Every day at 8 p.m. the production took place against HKDL’s lifelike replica of Sleeping Beauty’s Castle. The front façade doubled as a dynamic video screen on which princesses floated and danced, fairy dust sparkled and dimmed, and where Disney’s animated feature films appeared and faded from one iconic scene to the next. It becomes especially astounding when the walls are filled in with images that conformed to the structure’s silhouette, the amount of work behind it a marvel in itself since it probably involved a lot of calculation for timing and space as well as the amount of pyro to complement the video.

The accompanying music—a medley of Disney tunes anchored by the “Aladdin” theme song “A Whole New World,” all of it recorded by choir and orchestra—flows, lilts and occasionally provides the staccato for comedic effect, and then builds to a crescendo at the program’s highlights.

By the time Merida, our favorite firebrand of a princess, shot her arrow and bounded off as her thick, flaming red-orange hair gave way to the last  montage of other Disney heroes and heroines, we already had a fistful of used tissues that needed to be dispensed not just for hygiene’s sake but also because we thought it would be ridiculous to get caught crying in Disneyland.

You might call it a moment of weakness: A thirtysomething professional on a working trip to HKDL gets so emotional she’s unable to control the waterworks while watching a show called “Disney in the Stars” (a whimsical yet literal allusion to the nighttime program held outdoors, literally under the stars).

But now we prefer to think of it as a product of Disney’s ability to think and build big. There’s no exaggeration when it calls itself “the magical world of Disney,” because how else to explain simply all the details that create the “magic”?

We regret all the years we’ve heeded the advice to skip HKDL because it’s supposedly small and attractions are limited. Clearly, our sources have not done an HKDL tour marathon over the course of three days.

Besides the theme park, which should ideally be reserved two full days, the hotels are also huge attractions, said Randy Wojcik, HKDL creative director for the entertainment and costuming division. He recommended hotel-hopping, which to us initially sounded like a crazy idea.

A three-day vacay in which we have to tow the luggage to a different lodging after only a night’s stay?

But it’s possible, Wojcik insisted, because the resort offers free shuttle rides. Buses would come and go in brief intervals at all HKDL properties, including the transport station that’s a very short walk to the theme park.

An alternative to hotel-hopping is to book lodgings in one property and then tour the other Disney hotels. It would be worth your time and effort; book a room in one hotel and you’ll get access to the amenities and activities in the other two, plus enjoy varied cuisine in all the restaurants in each facility.

We had a room at Explorers Lodge, the newest of the resort hotels that’s built with families in mind.

Each room has two queen-size beds and can accommodate four. Seventy percent of these rooms can be connected so that guests traveling in large groups can have the flexibility of easily checking in on their companions while having their own personal space.

It’s got a smart layout as well, said Fannie Tsang, resident manager for hotel operations. Four people sharing a room can be a hassle when there’s only one bathroom but, with the vanity built separately from the shower and water closet, nobody has to wait long to do their business.

It’s those details, brilliant little design fixtures (rest areas for the handicapped, strategically positioned benches and boulders in the Explorers gardens) you’ll barely notice until the need arises, along with so many whimsical touches (e.g. Mickey giving the wakeup call, the signature black ears on toiletry bottles). Allow yourself to actually go explore and feed the senses… like the aroma of bacon, eggs, waffles and dim sum(!) at the breakfast buffets in Dragon Wind (Explorers Hotel) and Enchanted Garden (Disneyland Hotel) restaurants.

The fab Disney cast, including Mickey Mouse, Minnie Mouse, Pluto and Goofy (who holds yoga classes in the morning, by the way), cheerfully greeted guests at breakfast (so, yes, do the hotel breakfast buffet and you won’t have to queue in the park for cast photo-ops) and interacted with kids in the sweetest, most thoughtful way possible.

We got a kiss from Mickey—or maybe we should say he poked his nose on our cheek—and we definitely liked it.

Come Christmastime, which in Hong Kong Disneyland goes full swing  Nov. 16-Jan. 1, the décor, the merchandise, the shows, the activities, the costumes of the Disney cast, and the oh-so-glorious food and beverage will all be about the festive Yuletide season. HKDL plans to make it a very fun winter wonderland experience for guests—and tops it all off with a 40-percent hotel discount for early-bird booking exclusive to the Philippine market.

Christmas in Disneyland—we promise it’s an experience that seriously opens up a whole new world.

Visit hongkongdisneyland.com for more information on attractions and vacations at Hong Kong Disneyland Resort, and to avail of the limited-time advance purchase room discount.