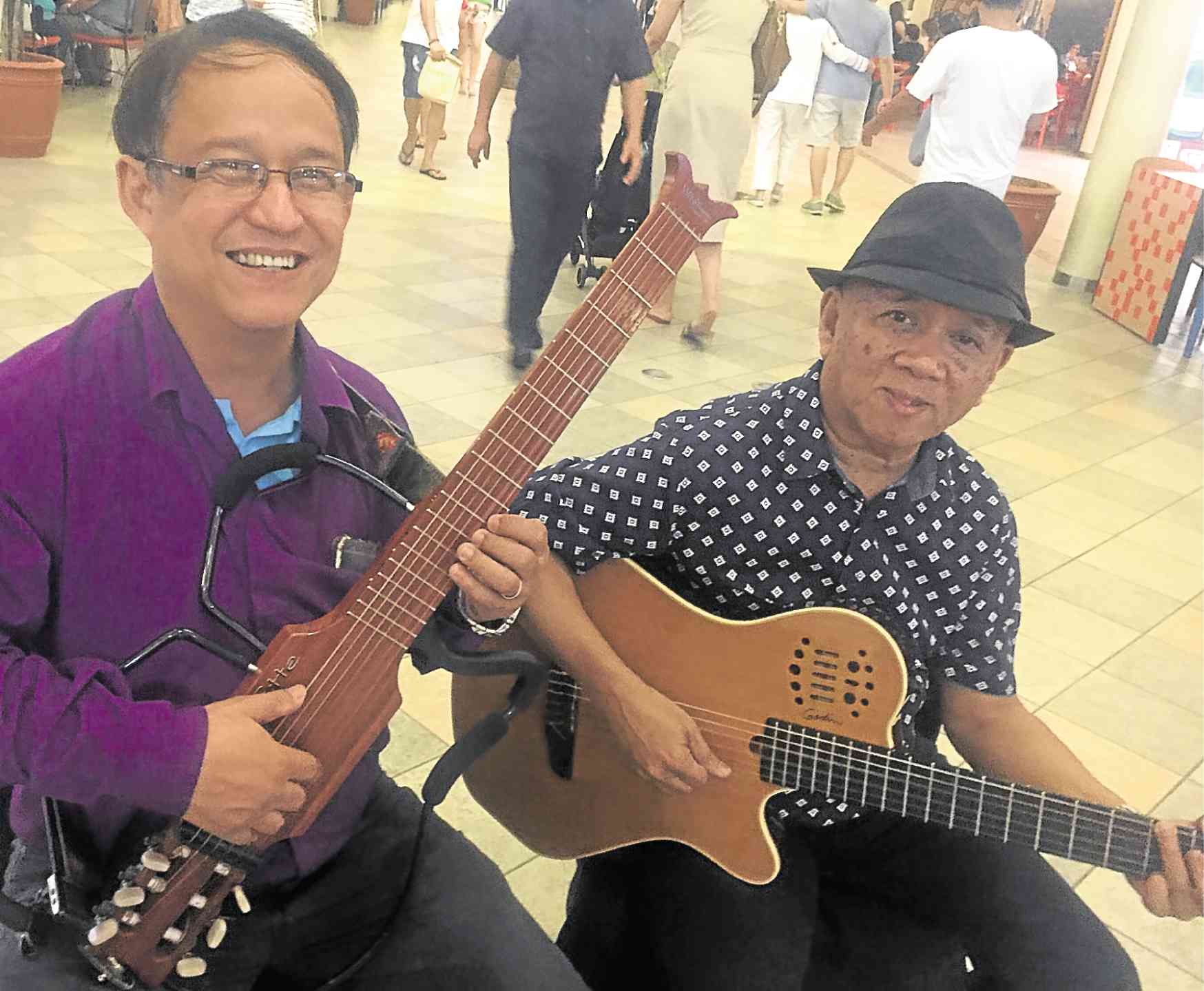 Boy Espedido (right) and friend Bernard Calma in a duet

One single letter, a “d” occurring in the first of two instances, instead of an “n,” saves Boy Espedido from an association with notoriety.

His narrowly missed namesake is Jovie Espenido, the police chief decorated by the president for the death of two mayors accused in the illegal drug trade. Boy does have his own notable meanness, but it’s an entirely harmless one, even pleasurable.

His formal first name is Pedro, which I thought, especially in its endearing diminutive, Pedrito, would make, in combination with Espedido, a fetching name for a guitarist: Pedrito Espedido puts it in the same nomenclatural class as Andres Segovia, Paco de Lucia, Laurindo Almeida and Diego Figueiredo.

Anyway, everybody calls him Boy, and that suits us fine —us guitar hobbyists who like to be seen as, at least, familiar with the genius we can never hope to possess: I may not be very good at it myself; ah, but I know Boy.

I first heard Boy 20 years ago, at cocktails preceding a wedding dinner. He was playing solo guitar amplified but toned down to a level beneath the buzz of social conversations. I heard him a few times more in a similar wasteful arrangement—a muted musical talent.

Not long afterward, Boy vanished, leaving me a memory that, however intriguing, was too meager to have a fix on. Suddenly widowed and left 10 half-orphans, four of them already in their 20s and, thankfully, sufficiently toughened, he had escaped to sea. He played his heart out to audiences on a cruise ship on the Mediterranean six nights a week for seven months of the year; the rest of the year he stayed home with his family in Cogeo, Antipolo.

He resurfaced 15 years later, his broken heart more or less mended, his family more or less secure and, with him back for good, reassured, and his musical promise and passion more or less fulfilled. He’s doing local gigs again, accompanied this time, not solo. I’ve always thought that it’s in the ultimate challenge of solo guitar that he should be listened to, and watched, for, in his disadvantaged case, seeing is believing.

In order to make five feet, Boy requires a bit of heels, and, with his proportions, he requires a special nimbleness to manage not only chords that splay fingers beyond the limits of normal human elasticity (David Raksin’s “Laura,” an absolute favorite of mine, has some of them) but also expansive runs along the fretboard (“La Cumana” is a marvel of pinpoint riffs at 180 beats per minute, the tempo prescribed by its composer, the jazz pianist Barclay Allen).

Boy plays by ear—and with heart, the collaborator that takes him through every challenge to his music making. “Dito galing ’yon,” he would reply, tapping his left breast, to anyone who wonders. That heart thumps with rhythmic vigor through his base strings, gasps for life in the muted notes and chords and revives in the glides toward a one-note or full-chord vibrato.

That same heart has been inside Boy for about as long as his ears have been listening to guitar music and his fingers plucking and pressing those strings. His father played guitar for provincial bands in Quezon province, taught him what he could, and sometimes took him along to gigs.

At age 9, he came to Manila and lived with friendly squatters, looking to widen his guitar education, which he did by watching. An early grade-school dropout, he had cast his lot with the guitar.

Going into adulthood, he found tutors who would sit by and critique and show him, but only on informal and fortuitous occasions. Mostly, he still watched, listened and picked up. In time he was being booked as an accompanist to singers and as a band and recording-session guitarist. He performed abroad as a member of some troupe or other. He said he had found himself a number of times accompanying Imelda Marcos singing her signature “Dahil sa ‘yo”—which he definitely does better, solo, on his strings.

Indeed, he is best left alone. and he was, at sea, just him and his guitar.

I owe my reconnection to Boy to his friend Bernard Calma, a guitarist in a trio that provides atmospheric strings at parties and accompanies volunteer vocalists among the partygoers for an opportunity that definitely beats karaoke for the braver or more ambitious of them. Once Boy was back, Bernard began taking him along as a soloist, showing him off.

Boy plays across the forms —classical, standards, jazz, blues, pop (and some rock, if anyone insists), and our own kundiman, old and new, from Buencamino to Canseco—and across the generations from his own (he’s 68) to that of the great Paraguayan guitarist and composer Agustin Barrios (1885-1944) and further back.

And he gave a rich sampling of all that a week ago: Pedro Espedido at the Makati Sports Club. —CONTRIBUTED