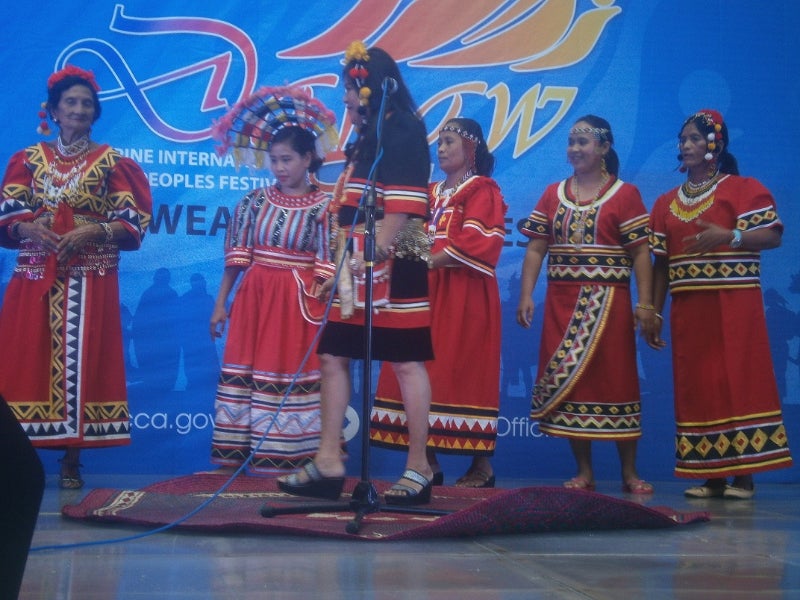 The event brought together 45 cultural communities from Batanes to Maguindanao and the Davao provinces.

The three-day festivities centered at the Open-Air Auditorium in Rizal Park but there were outreach performances at the SM Mall of Asia, Marikina City and Mapua University.

There were exhibits on cultural masters and demos on weaving and embroidery; product-making as in sturdy brooms (walis) which can cost P300 each; traditional cooking and games; a cultural night devoted to traditional dancing; an evening of contemporary performances (folksingers Joey Ayala and Noel Cabangon were the most applauded); and a forum on indigenous peoples’ success stories.

A Dumagat from Quezon Province spoke of his tribe’s respect for nature.

An Apayao woman delegate said her group was “peace-loving” and their courtship dances indicated “serenity, peace and love forever.”

The Agta cluster provoked laughter with their “scratching “ or “itchy” dancing. The Badjao, being sea gypsies, simulated a sea voyage.

The dancing of the Ivatan cluster was wild and joyful, as was the curacha, danced by a kinetic couple, which the Warays said promoted solidarity. There were P20 bills thrown into the air.

The Bicol cluster presented a war dance of the pulahanes, clad in red, who fought the American invaders during the early 1900s.

Delegates to the forum spoke on the need to help one another, to document traditional dances with the help of the NCCA, preserve heritage, enhance traditional skills, and increase schools of living traditions.

The Dayaw festival, an annual event, was a fitting sequel to the week-long Budayaw Festival of Cultures in General Santos City in Mindanao. –CONTRIBUTED