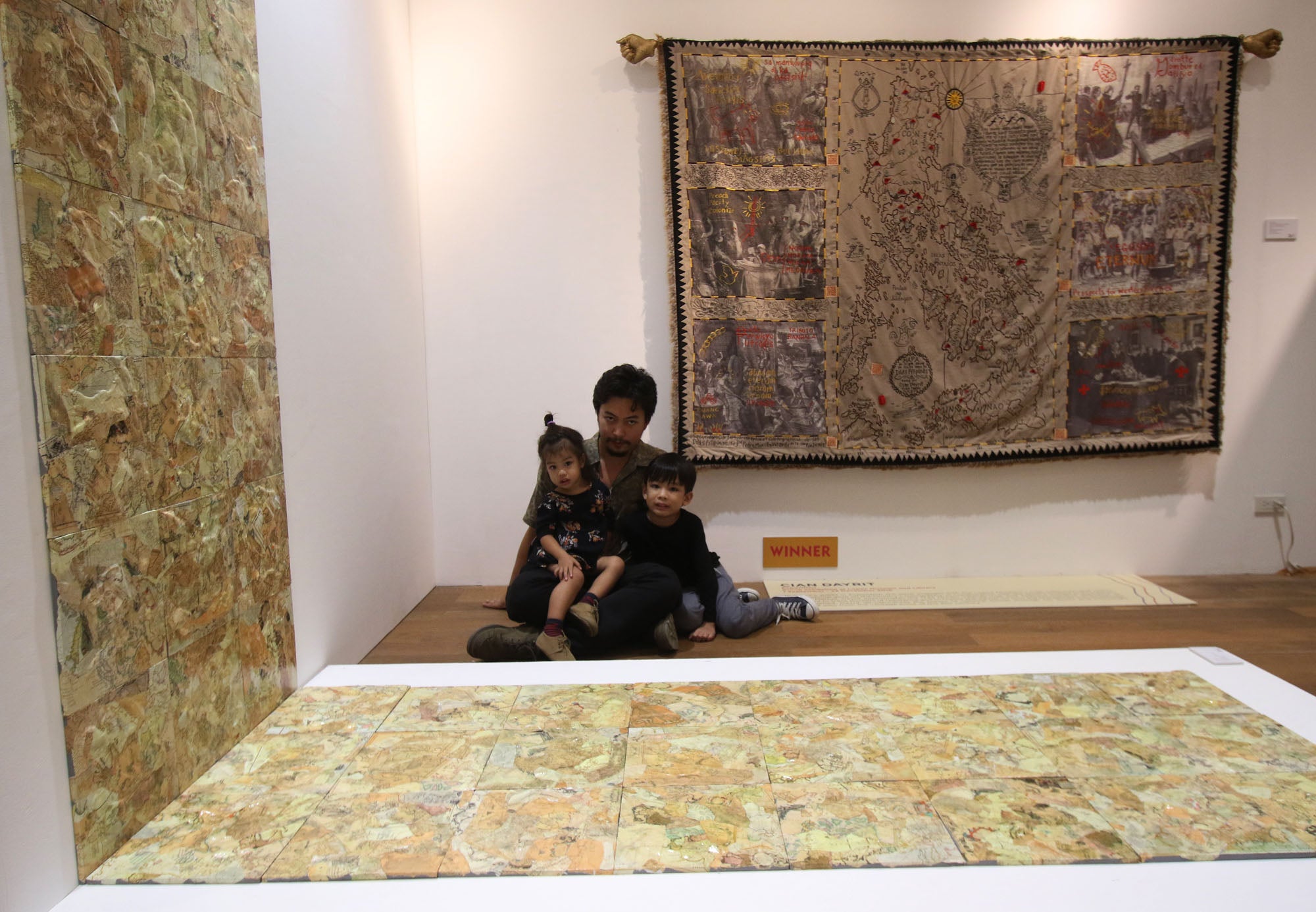 Cian Dayrit and kids amid his postmodernist colonial maps –PHOTOS BY RICHARD A. REYES

Art cultivates “a particular set of sensitivities,” that is, a different mind-set.

That was how Ateneo de Manila University president Fr. José Ramon Villamin, SJ, articulated the importance of art in his remarks during the Ateneo Art Awards (AAA) ceremony on Oct. 1 in Ateneo Art Gallery’s (AAG) new venue on campus.

Now on its 14th edition, the AAA is given to outstanding Filipino visual artists and critics under the age of 36.

For the Purita Kalaw-Ledesma Prizes in Art Criticism, two winners emerged from a shortlist of six: Ariana Mercado, for her essay “Dalena’s Curtain Call,” on Danilo Dalena’s retrospective “Last Full Show” at the Cultural Center of the Philippines; and Josephine Roque, for “Transits of Meaning,” on the international exhibit “Almost There” at the UP Vargas Museum.

The Fernando Zóbel Prizes for Visual Art involves international residency grants, with the recipients chosen by AAG’s partner institutions. Three artists emerged from a shortlist of 12.

Cian Dayrit was granted residency in La Trobe Art Institute in Bendigo, Australia, for his works in the group exhibit “Exposition” at López Museum.

Gale Encarnación received a grant from Artesan Gallery + Studio in Singapore for her thesis exhibit “Blow Me” at the University of the Philippines College of Fine Arts.

Constantino Zicarelli got the residency in Liverpool Hope University–Creative Campus in the United Kingdom for his solo show “Prelude to a Billion Years” at Artinformal.

All shortlisted exhibits have been re-installed in the left section of AAG’s fluidly constructed gallery on the upper-ground floor in the left wing of Arête, Ateneo’s new creativity hub near University Road. The exhibition runs until Dec. 2.

Encarnación’s multimedia installation is a bit of a shock. By the entrance one sees this antiseptic setup lined up with glass jars containing what look like human gums or false teeth floating in brine. The cringing sensation wanes when one looks closer and sees they’re just pink bubble gums.

By blowing the gum, the artist creates biomorphic forms that can depict living organisms and human organs such as the lungs, thus breathing life into an inorganic substance (as shown by a video monitor on the wall). She uses bubble gum as “a metaphor of the body and how it is sustained by breath.”

Zicarelli’s monochromatic work showcases a variety of pop art techniques with a touch of goth—from silkscreen painted with acrylic to graphic drawings in charcoal and graphite.

Limiting his palette to black and silver, the artist simulates the patterns and texture of wood veneer, replicates wallpaper motifs by manipulating the Ginebra San Miguel logo, thereby evoking the ghost of the past in the old house that was his exhibit’s original venue.

Dayrit chooses to explore a more distant past—the country’s dim origins. He blends text and image, folk art and dialectic, in commenting on empire as embodied in his Postmodernist take on colonial-era cartography.

He employed embroiderers from the Pasig market to craft tapestries approximating the look of those old maps with cartouches. He asked a friend from Sentro ng Wikang Filipino to translate his scathing commentaries into archaic Tagalog, which he then integrated into the tapestries. The result is, ah, mind-blowing.

Of the other shortlisted works, those that most impress us in both concept and craft include Catalina Africa’s “Studies on the Movement of Water,” Doktor Karayom’s “Linya,” Nicole Tee’s “Quiet Punctuations,” Zean Cabangis’ “Echoes” and Czar Kristoff’s “Configurations.”

One can see that these are some of our more progressive young artists, their respective works uniquely Filipino yet informed by globalization.

Among the grabbers here are the works of Kawayan de Guia, Marina Cruz, Leeroy New and Ronald Ventura. They linger in the mind long after one has stepped out of the gallery.

Each of these art installations, like poetry, is a distillation, whether of an art theory or life philosophy. Common gallery-goers may find difficulties in navigating through them, as in reading a poem. Some seem hopelessly esoteric that not even footnotes can explicate.

Artists have, indeed, a different way of looking at the world, a more recherché manner in articulating life. It’s not rarefied thinking. It’s just upper ground—but not unreachable to dusty mortals.