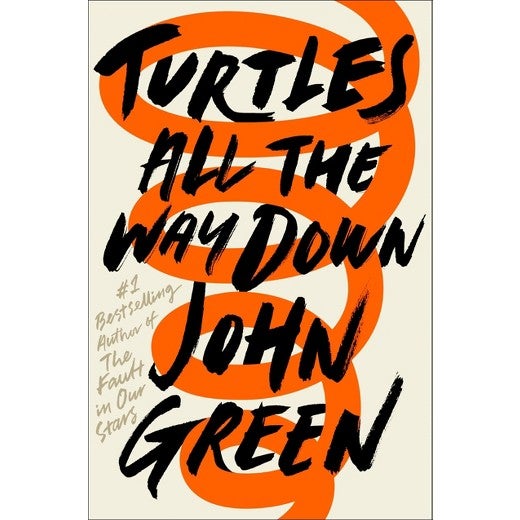 It would have been easy for John Green to go the easy route.

Green had already developed a loyal following—called the Nerdfighters—for his five Young Adult novels, that last of which, “The Fault in Our Stars”—a beautiful doomed romance between smart teenagers with terminal illnesses—became a worldwide phenomenon by selling millions of copies in 2012 and was adapted into a box office-topping film in 2014.

Readers have been waiting since 2012 for his new book, and that book, “Turtles All the Way Down,” (Dutton Books, New York, 2017, 286 pages) has arrived—and it does not disappoint.

Aza Holmes is a 16-year-old girl in Indiana living with obsessive-compulsive disorder (OCD) and acute anxiety. She lives every day with a waking nightmare of getting sick while secretly skipping the required dosage of the antidepressant Lexapro while drinking hand sanitizer (she thinks it will keep her insides clean and disease-free).

Aza starts off actually questioning whether she is real: She literally worries she is fictional.

Meanwhile, she navigates high school with her best friend Daisy while remembering her father who had died suddenly years earlier.

Aza’s life changes when she investigates the disappearance of billionaire Russell Pickett and falls into a relationship with Pickett’s son Davis. It is a geeky, hesitant relationship but one that Green wrings both comfort and discomfort from.

“Part of me wanted to tell him that I loved him, but I wasn’t sure if I really did,” Aza thinks. “Our hearts were broken in the same places. That’s something like love, but maybe not quite the thing itself.”

The expectations were enormous, but Green responds confidently. “Turtles” is smaller in scale than “Fault,” with a more arching dramatic structure. Quieter and more nuanced, “Turtles” is like John Green in a condensed form: very intense and focused. The book does not shy away from being intelligent and, yes, quite nerdy.

It’s also beautiful. It’s tempting to just keep quoting lines from “Turtles” to show this because the book has so many achingly quotable lines, like this one: “Like, the world is billions of years old, and life is the product of nucleotide mutation and everything. But the world is also the stories we tell about it.”

Aza’s friendship with Daisy is burnished with winning honesty and eccentricity.

The mystery regarding the missing man can be considered unnecessary because the beauty and power of “Turtles” lies primarily in its stunningly authentic portrayal of Aza’s experience with mental illness.

Readers will feel what it feels like to be trapped in day after day of battling something inside you that feels like it’s taking over, combining self-loathing with self-preservation manifested in actions and words running amok.

“‘I knew how disgusting I was,’ she tells herself. ‘I knew it. I knew now for sure. I wasn’t possessed by a demon. I was the demon.’”

Yet the book also inspires as the characters still fight to overcome their daily obstacles.

Green reminds readers of their worth in a world of fear and wonder: “We are both astonishments, the closest thing in the known universe to a miracle.”

“Turtles” is powerful because it is personal. Green has publicly said he suffers from OCD. This book is better than “Fault” precisely because Green has carried that experience onto the page. It’s claustrophobic and classic.

In a time when more and more attention needs to be focused on the diagnosis and treatment of young people suffering with mental illness, it is important not only to discuss mental illness in the open, but also discuss it with depth, accuracy and compassion. This book does exactly that.

“Turtles All The Way Down” proves that the author is more than just popular. It’s proof that John Green matters.