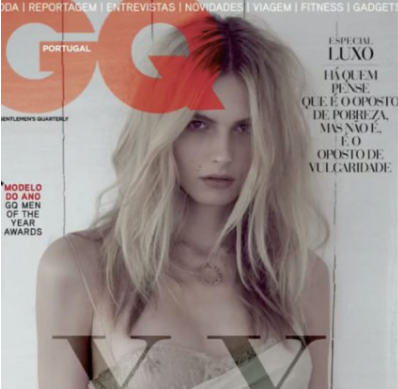 Andreja Pejic has been snapped up by the agency Ford Models, marking another impressive career milestone for the transgender model.

The agency took to Instagram to share the news with the fashion world over the weekend, uploading a video montage of some of Pejic’s biggest fashion moments so far, such as starring on the cover of GQ Portugal and being fitted for eveningwear, using the hashtag #NowRepresenting. She will join a host of famous faces on Ford’s roster, including models David Gandy and Noemie Lenoir.

Pejic, who was born in Bosnia and Herzegovina as “Andrej Pejic” and later moved to Australia, first shot to fame back in 2010. The androgynous model was styled as a woman for a Paris Vogue spread that captured the industry’s attention and imagination, and later took to the catwalk for Jean Paul Gaultier, Jeremy Scott and Rick Owens, before undergoing sex reassignment surgery in 2014.

She has since walked in shows for Prabal Gurung, Marc Jacobs and Giles, and landed the covers of Attitude Magazine, Glamour Spain and Harper’s Bazaar Serbia. Her trailblazing achievements include becoming the first transgender model to land a fashion magazine cover in February 2016, when she posed for Marie Claire Spain.

The model cemented her superstar status as a female fashion icon back in 2015, when she was unveiled as the face of cosmetics brand Make Up For Ever, making her the first transgender model to win a major beauty contract.

The groundbreaking Be You campaign focused on the importance of diversity, individuality and self expression, with Pejic saying at the time: “I can’t even describe how incredible it feels to be the 1st transwoman to become a face of a major cosmetics brand @Makeupforeverofficial. Thank you guys for being so brave and giving me this opportunity and for spreading the message that beauty IS diversity and simply that being different is perfectly OK!” She also featured in the brand’s 2016 Holiday campaign last year. JB